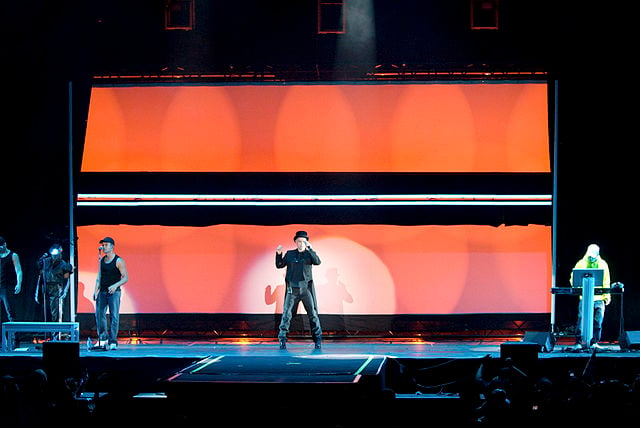 With our Top Ten Pet Shop Boys songs list we look at ten massive hits from one of the biggest British hit makers of the 1980’s. The Pet Shop are one of the most successful and high selling pop duo’s of all time. They have received many accolades over the years, winning many awards and having forty-two singles reach the top thirty in the UK with twenty-two of them getting into the top ten.

Having first formed in 1981, the Pet Shop Boys who consist of vocalist Neil Tennant and instrumentalist Chris Lowe have had a consistent forty year career during which they have been consistently active. They have had collaborations with many artists over the course of their existence. Tennant was a collaborator with Electronic, the project formed by New Order’s Bernard Sumner and Smiths guitarist Johnny Marr with which he recorded the hit “Getting Away With It.”

Other artists who the Pet Shop Boys have been associated with include Dusty Springfield, Liza Minelli, The Killers, David Bowie, Robbie Williams, Take That, Elton John, Madonna and Blur amongst others.

The Pet Shop Boys are known and acclaimed for their somewhat unorthodox approach to how they work within the music industry. They have always been very independent minded and have always made a point about following their own musical path without outside interference from record labels or industry executives. This is particularly evident with how they present themselves on a visual level. Despite receiving criticism in the early years for lacking presence on stage, they stated that the reason for both Tennant and Lowe’s rather unenergetic style of live playing was a reaction to the overly stylized live shows of a lot of other acts at the time.

Despite being associated with the eighties, they are still popular and successful to this day. So without further ado, let us look at what the ten best hits are from this brilliant and very catchy electronic duo.

Kicking of our Top Ten Pet Shop Boys songs list is this track that samples the piece by film composer Michael Nyman from the 1982 film “The Draughtman’s Contract” titled “Chasing Sheep is Best Left to Shepard’s.” It is taken from the group’s twelfth album Electronic which was released in 2013. Despite charting rather on the UK mainstream charts, it got to number eighteen on the independent charts.

This next track is taken from the Pet Shop Boys 2002 album Release which was a top twenty hit for them. One thing the track is primarily remembered for is its odd music video which consisted of footage of mice running around and eating wasted food. Upon the year if is release, the track was remixed by the German trance duo Blank and Jones,

This song is taken from the album Very released in 1993. It was the Pet Shop Boy’s thirteenth single to reach the top ten Uk singles chart where it debuted and peaked at number seven. In the US, it failed to chart on the Billboard Hot 100 but did get to number one on the Billboard Dance Club Songs chart.

Here we have the third single from The Pet Shop Boys second album released in 1987 titled Actually. The song is about an exploitative relationship where the protagonist is made to go out and earn money by their lover. Upon its release it got to number eight on the British charts. There have been numerous cover versions of it throughout the years.

Up next we have the Pet Shop Boy’s debut single that was released twice: first in 1984 then in 1986. The first version was produced by Bobby Orlando and became an underground hit in the American club scene. The second version was produced by Stephen Hauge and was included on their debut album Praise in 1985 where it got to number one in both the UK and US.

Kicking off the second half of this  Pet Shop Boys songs list we have another single from Very that got to number fourteen in the UK. It was the lowest charting single to be released from the album. The album contained a lot of Neil Tennant’s most personal lyrics and this very sombre and romantic track is no exception as he talks about starting to believe in love, presumably after had a failed relationship.

This is another single from the Pet Shop Boys debut album Please. Upon its release it peaked at number nineteen on the UK charts. The track is another romance-themed track, this time looking at the concept of people who shun the idea of falling in love, and saying that even those people will inevitably find it.

This was the lead single to be taken from The Pet Shop Boy’s third album Introspective released in 1988. It got to number seven in the UK and number one in France, Spain and Poland. The song is Latin-influenced which it combines well with the Duo’s usual electronic sound. It is yet another song about romantic relationships like many of their songs are, being about two men competing for the love of a woman.

Just off the top spot is the second single from the Pet Shop Boy’s fourth album Behaviour released in 1990. It got to number two on the UK singles chart, which made it the first single to miss the top ten since “Opportunities” in 1986. The song is apparently about how people’s perception of things change as they get older.

At the top spot we have a track that is not originally by the Pet Shop Boys but is a cover of a song that was originally made famous by Elvis Presley and has been recorded by numerous other performers including Willie Nelson. In the Uk it became the Christmas number one upon the year of its release in 1987 and number on the US Billboard Hot 100.