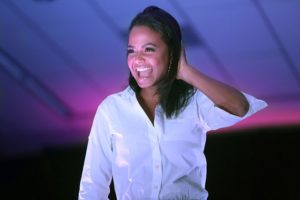 First born in Jersey City, New Jersey in 1981, then raised in Waldorf, Maryland, Christina Milian, assumed the maiden name of her mother in hopes the move would improve her odds as an actress in the highly competitive world of show business. Already since her earliest childhood, Milian took an interest in acting and already made this her first career choice. When her parents took notice of this, they offered their support as she’d audition at local talent agencies in hopes to get noticed. After shooting a pair of commercials, Milian starred in the classic Broadway musical, Annie. Upon realizing Milian’s talent had potential, her mother took her and her two younger sisters and moved to Los Angeles. Milian was thirteen years old at the time. This move resulted in her parents divorcing as her father opted to stay behind in Maryland.

Not Just an Actress

Originally, Christina Milian focused on becoming an actress, which included serving as a host for a series on the Disney Channel. In less than a year, Milian’s career would include performing music that would eventually lead her to sign a record label with Murder Inc. Records in 2001. Milian was nineteen years old at the time of signing and the release of her debut album, which is named after her. The successful launch of her musical career resulted in Christina Milian becoming a more versatile talent in show business with already having a decent acting resume to her name at this time.

In 2001, the song from the Kim Impossible Soundtrack was the official theme music used for the television series that ran from 2002 until 2007. The original version of “Call Me, Beep Me” featured Christina Milian’s vocals before it was covered by different artists throughout the show’s eighty-seven-episode run. Milian’s version was, according to critics, the catchiest with its Motown-style R&B performance. It was popular enough for Milian’s version of the song to return to the spotlight as it was chosen number one in 2015 when Disney hosted a channel that was dedicated to previously recorded theme songs. When the 2019 movie version of the series came out, it was Milian’s version that played at its start.

“Start a Fire” was released by Young Money Entertainment on November 24, 2014, which peaked at number ten on the US Billboard Bubbling Under R&B/Hip Hop Singles chart. The day before the single was released, he and co-performer, Christina Milian debuted the song on stage at the 2014 American Music Awards ceremony as a promotion single. The opening guitar, followed by the steamy delivery of Lil Wayne’s hip-hop style and Milian’s rhythmic vocals soon ignites into a dance song too catchy not to get caught up in.

On October 6, 2008, “Us Against the World” streamed for the first time as a theatrical-style ballad. For Milian, it was the first time she recorded and released a ballad since starting her music career. For Milian, the inspiration for the song came from the 1996 adaptation of the classic Shakespearean tragedy, Romeo & Juliet. There was intent at this time for a fourth studio album for Milian, but due to her third album not performing nearly as well as hoped, she lost her recording contract. So, Up Against the World was released without any official album association.

On the US Billboard Hot 100, “Between You and Me” was charted at number eleven in the year 2000, becoming the first major crossover hit for Ja Rule. It was the first single from his second studio album, Rule 3:36. Christina Milian paired up with Ja Rule to perform this song, melodically singing the chorus to play off his edgy rapping style. There is a version where Ja Rule sings this song on his own, but it’s not nearly as popular as the one that has Milian featured in it.

In 2012, “Hello” was produced by the Stafford Brothers, which featured the combined vocal talents of Christina Milian and Lil Wayne. On the US Billboard Dance Club Songs Chart, it peaked at number eleven. Hello reached number four with ARIA’s (Australia Recording Industry Association) weekly chart in 2013, and was also number four when it ran its year-end hit singles countdown. The song also became double-certified platinum. Milian’s soul-felt vocals seem to add an element of class to a song that’s designed to be a rhythmic mix of dance, pop, and hip-hop.

#5 – Whatever U Want (featuring Joe Budden)

The second and final single released from Christina Milian’s second studio album, It’s About Time, topped the UK Hip Hop and R&B Singles Chart in 2004 and as high as number six on the US Billboard Dance Club Songs chart. “Whatever U Want” also earned top forty charting success among the nations of Belgium, Ireland, Italy, Netherlands, Scotland, and Switzerland. The song has a few different versions, but the rap-style inclusion of Joe Budden was the one that earned the most recognition, along with the highest amount of fan appreciation. Overall, the song comes across as a bit of a throwback into retro-style disco, mixed with Joe Budden’s hip-hop style.

From Christina Milian’s third studio album, So Amazin’, “Say I” served as the final single from the songstress that would realize worldwide charting success. The song peaked at number twenty-one on the US Billboard Hot 100, at number ten on the European Hot 100 Singles Chart, and at number four on the UK Singles Chart. Sample music from Jackie Moore’s 1973’s Clean Up Your Own Yard was featured in Say I. A number of remixes have been done to the song, including a rap-style version that was included as a bonus track on the albums that were sold to the Japanese market.

The first single released by Christina Milian was “AM to PM,” which was the leading track from her self-titled debut album. In 2001, it appeared on most of the music charts on a global scale, mostly within the top forty. The single peaked at its highest on the UK Hip Hop and R&B Singles Chart at number two. On the US Billboard Hot 100, it charted at number twenty-seven. Overall, Milian’s song seemed to be more popular among the European nations than in North America, at least according to the overall performance on the music charts. It also became certified silver by the UK’s BPI. The popularity of the dance party song was credited to Milian’s popularity as a veejay for MTV upon the timing of its release.

“When You Look at Me” is Christina Milian’s second single from her self-titled debut album, which may not have reached as many music charts as the first single, AM to PM, did, but achieved greater commercial success as it received two gold certifications, namely from ARIA and France’s National Syndicate of Phonographic Publishing (SNEP). When You Look at Me also earned certified gold from the UK’s BPI. While this catchy beat song did not chart in the US, it did very well on the European and Oceania charts. On the UK Hip Hop and R&B Singles Chart, it peaked as high as second and at number ten on the Eurochart Hot 100. It also broke the top ten among the nations of Australia, Hungary, Ireland, Netherlands, Poland, and Scotland.

As a trio, Christina Milian, Fabolous, and Samy Deluxe performed a remix of “Dip It Low,” one of the tracks from her second album, It’s About Time, which was released in 2004. It remains as the most successful single to her credit to this day as it charted number one on the billboards of Canada’s R&R Pop Top 30, UK’s Hip Hop and R&B Singles Chart, and the US Billboard Dance Club Songs chart. On the US Billboard Hot 100, Dip It Low peaked at number five and on the Eurochart 100 at number eight. Among most nations, the song charted within the top forty. The Recording Industry Association of America (RIAA) certified the single as gold while the UK’s BPI certified it silver. As successful as the single was, it became the center of controversy as everyone involved with the recording found themselves on opposing sides of an argument regarding copywriting issues.