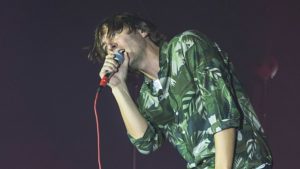 Our Top 10 Phoenix Songs introduce us to an award-winning French band famed for its striking indie pop music. Phoenix was founded in the 1990s by vocalist Thomas Mars, guitarist Chris Mazzalai, and bassist Deck d’Arcy. The three formerly were friends in school, having them start out their musical journey by playing songs at Mars’s house as a garage band. Mazzalai’s brother Laurent Brancowitz joined the band on the guitars after he left his short-lived band that they had formed with Guy-Manuel de Homem-Christo and Thomas Bangalter. Thomas and Guy-Manuel would later form the popular electronic duo Daft Punk.

In 1999, Phoenix started releasing singles which later featured in the band’s debut album United. The band has since then made quite exhilarating songs which have seen the band receive critical acclaim. Phoenix has been nominated for several awards, winning two album-based awards. Their first award was the 2010 Grammy Award for the Best Alternative Music Album for the band’s album Wolfgang Amadeus Phoenix. Phoenix won their second and last awards for the Album of the Year for Bankrupt! in the 2014 Victoiries de la Musique. Our top 10 Phoenix songs list brings the best of the releases from the band’s six studio albums.

Opening our top 10 Phoenix songs list is the ballad “Too Young” from the band’s debut album United. “Too Young” holds quite a beautiful history having the song become Phoenix’s first song to chart, peaking at number ninety-seven SNEP chart. Written by the band members, the upbeat song is featured in the film Shallow Hal and Lost in Translation. Thanks to its awe-inspiring lyrics, the song got the attention of indie rock fans and Le Knight Club, who remixed the song.

“J-Boy” is one of the best Phoenix songs from the band’s most recent album Ti Amo. Written by the band members, the song’s title stands for “Just Because Of You.” The song brings the best of Thomas Mars delivered on a jubilant tune. Released in 2017, “J-Boy” peaked at number twenty-one on the Billboard Alternative Songs chart.

The 2017 album Ti Amo has been described as one of the best albums from Phoenix’s career, featuring Italo disco and synth-pop. “Ti Amo” is an album-titled ballad that aids the band in channeling pure emotions of innocence, love, desire, and lust. The song was one of the promotional singles for their 2017 album. Following this, the album received positive reviews from critics, helping it peak at number seventeen in France.

Number six on our top 10 Phoenix songs list is the ballad “Long Distance Call.” The song is written by the band members for the 2006 album, It’s Never Been Like That. “Long Distance Call” preceded the album release helping the album gain quite some attention in the media. The song highlights the feeling that exists in a long-distance relationship. Many might relate to the song’s message having tons of long-distance relationships torn by lack of communication, space, and time among other factors.

“Entertainment” is one of the best Phoenix songs from the band’s album Bankrupt! The song is an original composition by the band members featuring a staccato guitar line and an array of synths that help make the tune more of an oriental-inspired sound. As the lyrics “I’d rather be alone” reveals, the song is about letting go. The song was adopted for the soundtrack album of the 2013 thriller film Now You See Me receiving quite a positive reception from the media. “Entertainment” would become a global hit for the band, featuring in tons of international charts, peaking at number eleven on the US Alternative Airplay chart.

Phoenix had another pulsating song from their fifth studio album, Bankrupt! Lead vocalist Thomas Mars revealed in an interview that the song, written by the band, is about trying to be cool, something that he quoted is boring for the greatest artists. The music video version of the song feels more guitar-driven as compared to the album version, which features more synth sounds. R. Kelly is featured in the official remix of the song, which is quite a banger too! “Trying to Be Cool” peaked at number ten on the US Alternative Airplay music chart.

While most of the best Phoenix songs are the band’s original compositions, “If I Ever Feel Better” samples “Lament,” a 1979 track from Toshiyuki Honda, a Japanese jazz artist. Released on the band’s debut album United, “If I Ever Feel Better” was among the first songs Phoenix penned down. The song remains the most successful Phoenix song in their native land France. Despite most of the nation’s population primarily speaking in French, the song climbed to a peak position of number twelve on the country’s singles chart.

“1901” is the second track on the band’s fourth studio album Wolfgang Amadeus Phoenix. Initially, “1901” was released as a free downloadable song from the band’s website. However, with the song attracting more attention to itself, it was later issued as a retail single. Lead vocalist Thomas Mars revealed that the song is much of a fantasy about Paris, which seems to have been better in 1901 than it is currently. The song has been described by many as a smooth and spirited reputable release from Phoenix. Thanks to its sublime composition that “1901” peaked at number eighty-four on the Billboard Hot 100. The song peaked at the top of the US Alternative Songs chart running on the chart for fifty-seven weeks, a record only beaten by “Savior” by Rise Against.

Number one on our top 10 Phoenix songs list is “Lisztomania,” from the award-winning album Wolfgang Amadeus Phoenix. Heinrich Heine used the song’s title was a name used by Heinrich Heine in describing the powerful fan frenzy Franz Liszt received during his performances. “Lisztomania” was the driving force towards having the band’s fourth album become Phoenix’s most successful album. The song peaked at number four on the US Alternative Songs chart.

Feature Photo at top of page: Raph_PH, CC BY 2.0 <https://creativecommons.org/licenses/by/2.0>, via Wikimedia Commons