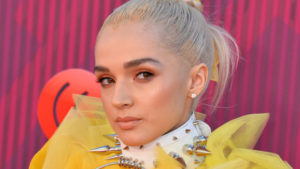 Our top 10 Poppy songs list looks at the catalog of a millennial female artist whose fame is credited to YouTube. Born in 1995, Poppy started as a dancer, but her path directed her to music as she grew up. While she might be famous, Poppy’s childhood life was slightly different (tough suits her context better). Her lean body and silent character at school saw her become a victim of bullying. As a result, Poppy’s parents supported her to finish her studies through homeschooling.

Poppy knew that her life would be better as a singer at the age of eleven. She practiced music on a low profile all this time, only to launch her career for the world to see in 2011. Her first performance was in August 2011, where she sang a cover to Alanis Morissette. YouTube provided her with a perfect platform to reach out to music lovers and her fanbase. She would create two YouTube channels where she hosted festivals and later posted her songs.

Her love for music saw her relocate to Los Angeles in 2013 to pursue music full-time. It was a big moment for Poppy in 2015 after she bagged a recording contract with Island Records. During this time, she went under the name That Poppy which she would later change to Poppy. Her debut song was “Everybody Wants to Be Poppy.” Soon after, she released the song “Lowlife,” giving her global attention. You ought not to confuse this song with “Low Life” by Future and The Weeknd.

February 2016 saw Poppy release her debut EP Bubblebath, which consisted of four pop songs, including “Lowlife.” Poppy went on to release her debut album Poppy.Computer (2017) under Diplo’s record label Mad Decent. The record label has recorded and released music by other artists such as Sleepy Tom, Walshy Fire, and Jack Ü. Just as her fame rose, Mars Argo, who was formerly working with Titanic Sinclair, filed a lawsuit claiming copyright infringement. However, Poppy quickly responded to this, calling her out for clout chasing.

Before the release of her album Am I a Girl? (2018), Poppy released a cover of “Metal” by Gary Numan. The cover was featured on the video game WWE 2K20. In the same year, Poppy would win the Breakthrough Artist accolade by Streamy Awards. Her third studio album, I Disagree, was released in 2020 under Sumerian Records. The album saw her go full-blown into the metal scene. She later would admit that they had some differences with her creative collaborative Titanic Sinclair, which caused the two to part ways. Poppy released another cover song, “All the Things She Said,” by the Russian music duo t.A.T.u.

Her efforts in the metal scene have not gone unnoticed, having her nominated for a Grammy Award for the Best Metal Performance thanks to the song “Bloodmoney.” This was history in the making, having her become the first-ever solo female singer to be nominated in this category which is majorly dominated by bands. Acts that have won the most awards in the category include Metallica, Tool, Black Sabbath, Slayer, and Nine Inch Nails. Here are the best Poppy songs from her four studio albums, with her most recent being Flux (2021).

Opening our top 10 Poppy songs is the hit “Voicemail.” The song is featured on her sophomore EP, Choke. “Voicemail” saw Poppy tweet a number that her fans could leave a voicemail at. The song alludes to how she leaves her voicemail full, showing her disregard for the messages (sounds sarcastic, right?). She later revealed that Gary Numan inspired the song and its accompanying video.

“All The Things She Said” was originally released by the Russian music duo t.A.T.u for 200Km/h in the Wrong Lane (2002). The song alludes to the tumult of a woman battling her sexual orientation. “All The Things She Said” was a success having the song viewed almost three hundred million views on YouTube. Poppy is one of the many artists who have covered the song. Other artists to cover the song include The BossHoss, Stoned Age, Jens O., Madbones, and The Berzerker.

Poppy surprised many when she took on metal in her last releases. Despite the sudden shift of music genre, she has been quite successful in the metal scene. However, her music blends in pop elements in her metal songs. Some have classified her recent songs under the pop-metal genre, which gained prominence in the 1980s, thanks to Def Leppard. Poppy has picked it from Babymetal, and Bring Me the Horizon is trying to popularize the pop-metal music scene. “Concrete” finds Poppy singing about burying oneself to put to rest the past or move on from an older version of oneself.

“Bloodmoney” towers over most songs in the album I Disagree (2020) to assert its position as one of the best Poppy songs. The song’s lyrics allude to Poppy’s negative experiences and her former creative collaborator Titanic Sinclair went through. This includes dealing with liars and the hypocrites in the music industry.

The song saw Poppy become the first female solo artist to be nominated for a Grammy Award in the Best Metal Performance category in 2020. However, she lost the award to “Bum-Rush” by the heavy metal band Body Count. Other songs that were nominated for the award were “Underneath” by Code Orange, “The In-Between” by In this Moment, and “Executioner’s Tax (Swing of the Axe)” by Power Trip.

Number six on our top 10 Poppy songs list is the album-titled hit “I Disagree.” Among other songs in the album, the hit saw her redefine her craft and even come out in interviews in her natural self. With the song, Poppy seems to be nauseated by record executives. In an interview, she revealed that the song alludes to times one feels misunderstood, disrespected, and even restricted. However, she tries to rise above all these through this ballad that features metal elements.

“Time Is Up” saw Poppy team up with Diplo in a song whose video was directed by his former collaborator Titanic Sinclair. The song is featured on her sophomore album Am I a Girl? “Time Is Up” finds her singing about the end of the human race ushering in a new generation of robots. She further reveals that the song is meant to show how our greed will finally lead to the takeover by bots. She revealed the song’s title through binary codes on Twitter which was quite a creative move.

Poppy.Computer (2017) is Poppy’s first studio album. Amazingly, she had quite a large fanbase by the time she made the release, and her songs got a massive audience waiting for the YouTuber’s taste of music. Among songs that gave great traction at the start of her solo music release was “I’m Poppy.” The song serves as an introduction of Poppy to the world, with its lyrics acknowledging how many wished to be Poppy owing to her success.

Taking us back to her debut album is her splendid ballad “Computer Boy.” The song finds her singing about a guy she fell in love with on the internet. She realizes that she can barely live without this “Computer Boy,” having her get attached to her. Poppy later pleads with the guy not to ever leave her side. However, this is just a mockery delivered in a metaphoric way about society’s addiction to the computer.

“X” is one of the musical gems you will find from Poppy’s sophomore album Am I a Girl? (2018). The song blends heavy metal, nu-metal, and power pop elements to deliver one of her heavy-sounding songs. “X” was her first song to feature her sudden shift to metal-influenced songs. Her lyrical maturity can already be felt in the song ushering a new and rejuvenated artist set to take pop metal to another level.

Number one on our top 10 Poppy songs list is the hit “Lowlife,” from her EP Bubblebath. The song has become Poppy’s most-streamed song, amassing more than sixty-seven million YouTube views. Poppy teamed up with Simon Wilcox and Sir Nolan in penning the lyrics to this rip-roaring ballad that has become her most recognized song since the start of her music career. The song was later remixed by the Slushii, who has worked with notable DJs such as Ookay, Marshmello, and Jauz.