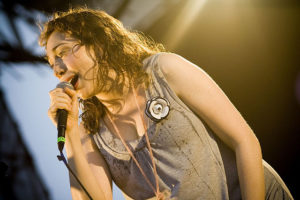 Our Top 10 Regina Spektor Songs introduces us to a Russian-American female artist whose passion for music was inspired by her musical Russian-Jewish family. Born in 1980, Regina Spektor’s father was an amateur violinist, while her mother was a renowned music professor in a Soviet music college. Her brother Boruch aka Bear, also had some love for music, and Regina Spektor would feature him in her 2004 album Soviet Kitsch. At the age of seven, Regina Spektor would start piano lessons practicing on a Petrof upright gifted to her mother by the grandfather. Regina Spektor grew up listening to classical music and some Russian bards. Her father introduced her to rock and roll bands such as The Moody Blues and the Beatles music, which Regina Spektor loved. Later in life, Regina Spektor would learn to play the classical piano from Sonia Vargas, a professor at the Manhattan School of Music. Her love for songwriting would grow after songs she had written while at home attracted the attention of other children with who she interacted during a visit to Israel.

Her music career would begin when she indulged in performances in the anti-folk scene in New York City. The Strokes would tag Regina Spektor as the opening act for their nationwide tour recording “Modern Girls & Old Fashioned Men” together. While her album, Soviet Kitsch, was the popularly known album by 2004, Regina Spektor had already done two albums, 11:11 and Songs, earlier in 2001 and 2002, respectively. Most of Regina Spektor’s songs have some punk, rock, folk, hip-hop, jazz, and classical influences, having her perform on a broad vocals range with a falsetto extension. Here are the top 10 Regina Spektor songs that have made a great name for this songwriter, pianist, singer, and record producer.

Ushering us to the Top 10 Regina Spektor Songs is “Blue Lips” from her 2009 album Far. The song serves as a perfect example of Regina Spektor’s spontaneous but magnificent songwriting skills. “Blue Lips” alludes to a religious experience where the main character in the song discovers faith. However, this person seems a little bit unimpressed by how faith is executed. One thing that stands out in this song is its piano riff which exhibits her jazz-honed ear for melody.

“Laughing With” is yet another hit song from the band’s 2009 album, Far, with some spiritual affiliations. The song’s theme relates greatly to the old expression that states that there are no atheists in trenches. Regina Spektor reasons that it’s not an easy thing to be an atheist at the comfort of your home and even harder when you are on the verge of death. The song also alludes that God possesses a sense of humor, only playing to an audience too afraid to burst laughter.

Featured on her fourth album, Begin to Hope, “On The Radio” takes in its chorus references Guns N’ Roses’ song “November Rain.” The song comes right after Regina Spektor had achieved critical acclaim with her third studio album, Soviet Kitsch. “On The Radio” got featured as a soundtrack for several movies and TV shows. Its music video features Regina Spektor teaching young children a music class. Thanks to its great composition that the song peaked at number 60 in the UK Singles Chart.

“How” is a piano hit song from Regina Spektor’s 2012 album What We Saw From The Cheap Seats with a breakup theme. Producer Mike Elizondo went ahead to say in an interview that despite Regina Spektor making a ballad on lyrical content that she barely touches on, this song brought the best out of her vocals. And true to the word, it takes such emotional moments/experiences to pull off vocals and performances like such.

Sometimes, doing something another time with more dedication and determination might be the thing that will shoot you to much-needed success. In this context, Regina Spektor would pick the song “Ne me Quitte pas” from her 2002 album Songs, updating the tunes in a makeover that features additional steel drums and trombone. Regina Spektor would now have this song featured on her 2012 album, What We Saw From The Cheap Seats.

Even though “You’ve Got Time” lost the Grammy Award for the Best Song Written for Visual Media in 2014 to Adelle’s “Skyfall,” the song remains dear to the hearts of man. Comedy-drama lovers might have interacted with this song in the American Netflix comedy Orage is the New Black. The comedy show is centered around New Yorker Piper Chapman’s character, sent to a women’s prison for possessing a suitcase with drug money. A drug smuggler and former lover to Piper Chapman was the owner of the suitcase of money. “You’ve Got Time” was released on iTunes back in 2013, where it received quite some positive reception.

Returning us to Regina Spektor’s successful beginnings in music is “Us” from her album, Soviet Kitsch. “Us” references the time when you realize that what you thought about the world was a mere illusion. As from the song, the world is like living in a den of thieves trying to find solutions to your problems. Unfortunately, the bitter truth is that we never get to find the solutions to our life problems until we lay in peace on our deathbed. However, despite the negative things that happen in life, you can be certain that tons of great things in life trace back to happiness, no matter how small they might be.

Featured on her album, Begin to Hope, “Samson” takes us to the biblical story about Samson and Delilah. Regina Spektor uses the story of Samson and Delilah to show how he felt even after Delilah did horrible things to him. It’s quite rare and strange that a lover would kiss you and say it’s all fine after you betrayed them or did them wrong. However, this is unconditional love at its best showcased in true forgiveness.

At number one is Regina Spektor’s song “Fidelity” from her most successful 2006 album, Begin to Hope. Here, Regina Spektor sings about safeguarding herself from being heartbroken in love by taking refuge in music. Sadly, like most of us, Regina Spektor cannot keep away from the feelings of love, only to fall in love and have her heartbroken. Inspired by the movie High Fidelity, the song became an international song and one of her best songs ever.