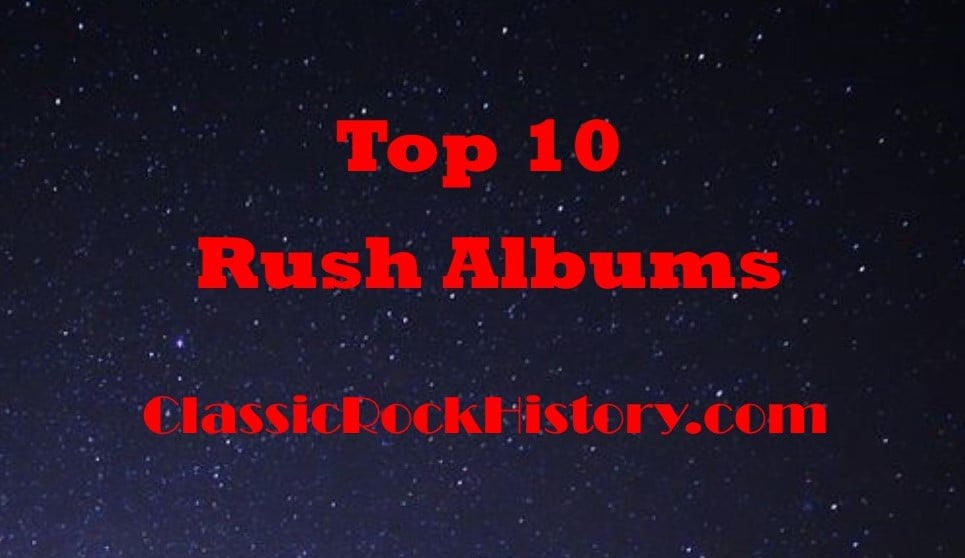 Our top 10 Rush albums is looking at the best of the band who were the first to cross the genres of Progressive Rock with more conventional Rock and Heavy Metal. While they have never been remotely cool or hip to like, Rush could not care less, and neither could their extremely loyal and sometimes rather obsessive fan base. The band always managed to make progressive and innovative music whilst at the same time never becoming boring or pretentious. In addition to this, they have always been an extremely intelligent band, with their lyrics drawing from many works of literature and writing several songs about alienation and being outsiders which has led to them being seen by many as the ultimate “geek” band.

The band formed in Toronto, Canada in 1968 and even though they had a few different members in their first couple of years, the band throughout most of their career was made up of the trio of bassist/vocalist Geddy Lee, guitarist Alex Lifeson and drummer Neil Peart who sadly passed away in January 2020.

Rush is band who are not easy to dissect. This list is bound to raise differences in opinion but that is the point: this is just a matter of opinion and anyone else can have their own personal favorites. So, without further ado, here is our favorite Rush albums.

First on the list is 2007’s Snakes and Arrows. This album holds a personal significance for me because it was the tour for it where I saw Rush for the first and unfortunately only time. However, that is not the sole reason for its inclusion on this list. As far as the output of latter-day Rush goes, Snakes and Arrows was a strong collection of songs which stood out among its fellow post-2000 releases. It was followed only by one more album, 2012’s Clockwork Angels before the band’s retirement in 2018. Among its highlights are the single “Far Cry,” “The Way the Wind Blows” and “Working them Angels.”

Up next is the band’s fourteenth album from 1991. The first album of the 1990’s saw the band achieve commercial success, something which they had not had done for quite some time. It peaked at Number three on the US charts and six songs from it were released as singles. The band had been on a brief hiatus prior to recording the LP after touring for their previous album, 1989’s Presto.

The album’s success is a testament to the fact that Rush were still able to remain relevant in a time when grunge was at its peak instead of being seen as outdated and irrelevant like many other traditional bands were during this era. However, Rush have always been a band to embrace the things happening around them whilst never jumping on the bandwagon: they were fans of grunge just like they were with punk a decade earlier. Standout tracks include “Heresy” and the singles “Dreamline” and the title track.

At number eight is Rush’s final ever album from 2012. This LP was well received by critics and many fans regarded it as their best since the 90’s. The album is a concept album set in a sci-fi/steampunk work and was even accompanied by a novelization by author Kevin J Anderson, a long-time friend of Neil Peart. It reached No 1 in Canada and No 2 on the Billboard 200. It is a strong album for the band to end on.  Standout tracks include: “The Anarchist” and “BU2B.”

With the previous album Signals, many fans were not quite on board with the synth-based direction that the band was going in. They wanted to see the band return to their rock roots. Grace Under Pressure seemed to fine a better balance between the two. There were still a lot of synths being used on this album, but they are more intertwined with Lifeson’s guitar sound. The album has dark lyrical themes with the title referring to the concept of an individual having the feeling of pressure in a variety of different situations. Standout tracks: “Afterimage,” “Red Lenses,” and “Kid Gloves.”

This second album from 1975 marked the debut of Neil Peart with the band replacing original drummer John Rutsey. Because of this many consider it to be their true debut. The change in drummer was accompanied by a change in musical direction, with this album showing the first signs of the band’s progressive sound, even if it is still rooted in the Led Zeppelin-esque hard rock of their self-titled debut. Highlights include the title track “In the End,” and “Anthem.”

After the much-acclaimed Moving Pictures, Rush had a lot of pressure on them to come up with a worthy follow-up. At the time some critics believed they failed in doing so. This ninth album released in 1982 is very synth heavy. It contains the single “New World Man” which reached number one in the United States as well as one of the band’s most famous songs “Subdivisions” which reached number three on the Billboard rock charts. Even though it was not universally well received at the time, it is a classic album with other great Rush songs such as “Digital Man” and “Countdown.”

At number four on our top 10 Rush Albums list is the self-titled debut from 1974. It is always interesting to hear a first album where the band sounds rather different from the sound that they established. Also, hearing an album without Neil Peart is interesting given how renowned he was as a drummer and the fact that when he joined, he became the bands primary lyricist. While it is true that the Led Zeppelin influenced hard rock that the band play on this album does sound a little underwhelming when compared to their following prog masterpieces, this album is definitely up there with the best which warrants its place at number four on this list. The standout track is “Working Man,” which to this day is a Rush classic.

At number three on our Rush albums list is an album from 1977 that is widely regarded as a progressive rock masterpiece. There is much variation on the album, with the length of the songs ranging from 2 to 11 minutes. With this album. Rush had clearly improved as musicians and songwriters. This album was also their first to use synthesizers, as well several other forms of instrumentation. Highlights include the single “Closer to the Heart” which showed that the band could write great traditional classic rock songs. On the other hand, the album features the 11-minute epic “Xanadu,” which is a track that truly shows how brilliantly non-conventional Rush could be.

At the number two spot on this Rush albums list is 1981’s Moving Pictures. The album features one of the all-time greatest ever opening tracks in the form of “Tom Sawyer.” It was the band’s eight album and saw move towards a more radio-friendly direction, with many of the songs being shorter and containing a more traditional structure as opposed to the more boundary-less nature of some of the previous albums. The album was a success upon its release both critically and commercially, reaching number three in both Canada and the United Kingdom. Other highlights include the alienation-themed “Limelight,” and the instrumental “YYZ.”

At the number one spot on our Top 10 Rush Albums list  is Rush’s fourth album from 1976 entitled 2112.  After the negative reception of the previous album 1975’s Caress of Steel, the band’s record company recommended that they did not continue with the more progressive direction and go back to the blues-based hard rock sound of the first couple of albums. However, Rush did not listen and instead produced an album that has a twenty-minute opening track!

With this album, Rush clearly looked at where they had gone wrong with the previous release and  took their writing, playing and production skills to an entire new level. It was received far more favorably gaining much critical acclaim and charting at number five on the Canadian album charts.

What makes this album so great is that is the first truly classic Rush album. After the first two more hard rock-oriented releases and the third which was an unsuccessful attempt to go more progressive, this album was the first to truly establish Rush as the Prog masters that they have been ever since.

The opening track takes up the entire first side of the album. The second half contains six tracks that are all brilliant with the best being “The Twilight Zone” and “A Passage to Bangkok.” A true Classic Rock Masterpiece.