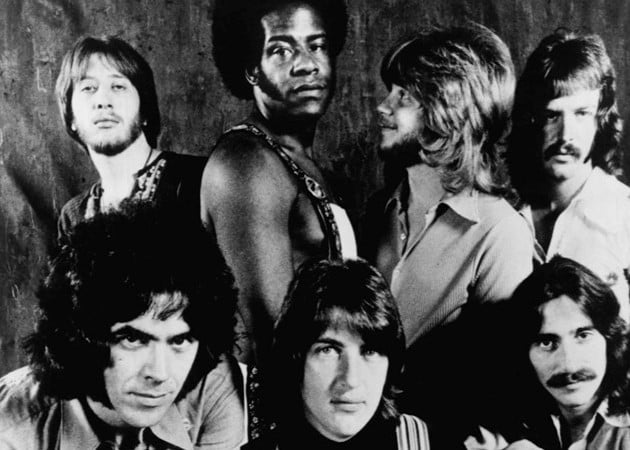 For most music fans, Three Dog Night represented a band who released a series of very successful singles in the late 1960s and 1970s. However the band also released a long list of great albums that have been overlooked as well as the great musicians that performed on those records. Can anyone mention a Three Dog Night instrumental? Well there’s a great one on the band’s Naturally album called “Fire Eater” that defined just how great a BAND Three Dog Night were. Three Dog Night consisted of the band’s three vocalists Danny Hutton, Chuck Negron, and Cory Wells. The band was defined by Joe Schermie on bass, Michael Allsup on guitar, Jimmy Greenspoon, and Floyd Sneed on drums. There were a few changes over the years, but for the most part that was the core group.

1974 was a weird year in pop culture as people were streaking across the nation while others purchased pet rocks in stores like Woolworth’s and McCorys. Three Dog Night took part in that madness with one of the strangest album covers we have ever seen gracing their 1974 record called Hard Labor. 1975 saw the emergence of Disco on the scene while punk was simmering in the background. None of it had an effect on Three Dog Night as they continued to pump out great rock and pop records. The band released one of their most underrated records in 1975 called Coming Down Your Way. The following year Three Dog Night released the album American Pastime. Founding member Danny Hutton only appeared on one track because he had been fired from the band. Three Dog Night broke up after the release of the American Pastime album. However, five years later they reunited. In 1983, Three Dog Night released the final studio album of their career entitled It’s A Jungle.

Since Three Dog Night was a band that specialized in cover songs, their performances really defined who they were. With that in mind, we have chosen to also include their live albums in the mix for choosing our ten favorites.

We open up our top 10 Three Dog Night albums list with we believe was the last great Three Dog Night album. The Coming Down Your Way album was released in 1975. This is pretty much the first Three Dog Night album that did not contain any big time hit singles. Nonetheless, we always loved the song “Til the World Ends,” which was the only single released from the record. The album contained all cover songs. Another favorite was the cover of Randy Newman’s “You Can Leave Your Hat On.,” Other great tracks included “Midnight Flyer,” and “Kite Man.”  This one had a very slick production with some great guest appearances by legendary musicians such as Ernie Watts, Victor Feldman  and Chuck Findley.

Continuing with our top 10 Three Dog Night Albums list we turn to the bands 1974 release Hard Labor. It was the bands eleventh studio album. The album cover was a bit controversial to say the least. It never made any sense since the band’s reputation didn’t seem to really warrant a controversial album cover. Nonetheless, Hard Labor has some great songs on the record including the big hit “The Show Must Go On,” freshly paired with some good old fashioned carnival music. Other standout cuts included the great John Hiatt penned song  “Sure As I’m Sittin’ Here” and Allen Toussaint’s “Play Something Sweet”

Cyan was Three Dog Night’s tenth album. By the time Three Dog Night released the Cyan album in 1973, the hits were starting to slow down. However, the Cyan album did present Three Dog Night fans and the rest of the world with a real big one. The album spawned the massive hit single “Shambala.” The album’s second single “Let Me Serenade You,” did not fair as well. Still, even though the album did not contain multiple hits, it was a strong record across the board that got a lot of plays on our 8 track player.

As we continue our Three Dog Night albums list we turn to their fabulous 1974 album Harmony. The album was highlighted by the bands wonderful single “Just An Old Fashioned Love Song.” That great song was written by Paul Williams. Even more popular. especially among die hard Three Dog Night fans was the albums opening track “Never Been To Spain.” Both songs were top five hits on the Billboard Hot 100 in 1971. WOW!

# 6 – Around the World with Three Dog Night

The second half of our Three Dog Albums list opens with the album It Ain’t Easy. The album was the band’s fourth release. It was issued in 1970. There Dog Night covered songs on this one written by some of music’s most cherished songwriters such as Randy Newman, Elton John, Barry Mann, Cynthia Weil and Paul Rogers. Standout tracks included the big hit “Mama Told Me Not To Come,” and fan favorites “Woman,” and “Out In The Country.”

Three Dog Night’s great Seven Separate Fools album was released in 1972. The album contained two of the most loved Three Dog Night songs of all time. Danny Hutton’s incredible passionate performance on the album’s lead single “Black and White,” stands as one of the best of his career. Chuck Negron also delivered a passionate and soul infused vocal on the beautiful song “Pieces of April.” Cory Wells once again recorded a great blues New Orleans style tune with that deep growl called “Tusla Turnaround.” This was a great Three Dog Night album. Every single song was a gem on this one.

As we close in on the top spot on our top 10 Three Dog Night albums list we turn to three great ones. Suitable for Framing  was an amazing Three Dog Night album that featured some of their biggest hits. The band was on fire on this record. Listen to those great drum and bass grooves that fueled all the album’s tracks. Joe Schermie and Floyd Sneed were the real deal. So many standout tracks on this great record. Our favorites were Laura Nyro’s brilliant song Eli’s Coming, Dave Mason’s “Feelin’ Alright” and the spectacular track “Easy to Be Hard,” which was from the Broadway play Hair.

We close out out top 10 Three Dog Night albums list with the great Three Dog Night Album Naturally. The album was released in 1970. It contained the band’s biggest hit of their career and the number one song of the year in 1970. It was the classic and most memorable track “Joy To The World.” Interestingly, they never expected the success of the song simply based on the fact that it was not the first single released from the album. Even more interesting was the fact that “Joy To The World,” was placed as the last song on the album. Nonetheless, the record was jam packed with so many great songs including standouts such as “One Man Band.” “Liar,” I’ll Be Creeping,” and “Sunlight.”