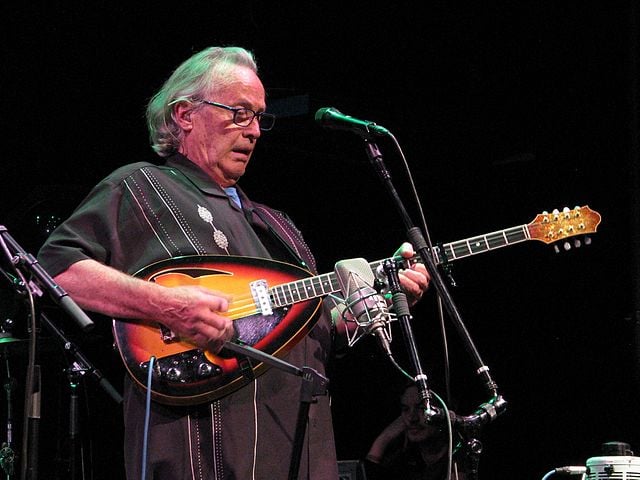 With our top ten Ry Cooder songs we look at a man of many talents who has worked as a musician, film score composer and record producer. His career started in the 1960’s with his first band being the unsuccessful pickup trio that he formed with Bill Monroe and Doc Watson. His first big break came when he played with Captain Beefheart on the 1967 album Safe As Milk. Throughout the rest of the sixties he worked as a session musician for the likes of the Rolling Stones and Randy Newman.

When the 1970’s dawned, Ry Cooder recorded several albums of his own which marked the point when he started to develop his guitar style. He would continue to collaborate with other artists throughout this decade including Van Morrison.

The 1980’s marked the point where Cooder became a frequent film composer. Films that he composed music for include The Long Riders, Southern Comfort, Streets of Fire and Brewster’s Millions. In addition to this, he would collaborate with several artists during the decade.

The 1990’s would be yet another progressive decade for Ry Cooder as it saw him recording two crossover albums of world music, a genre that he has been a champion of all of his life as a musician. In the years since, he has continued to be a prolific and successful artist.

Ry Cooder is rightly regarded as one of the greatest guitarists of all time with the biggest source of acclaim being his slide guitar style of playing which is heavily rooted in traditional American roots music. A top ten list of best songs is no mean feat for such a musical genius, especially on a site like Classic Rock which is frequented by a lot of diehard Cooder fans. However, this writer was up to the challenge so here we go…

Kicking off this list is a track taken from Paradise and Lunch released in 1974. It is a cover of an old folk song that is said to have been sang by field hands while they stacked bales of cotton. Here Cooder puts his own spin on it whilst at the same time being respectful to its origins. The entire album was made up of covers of traditional jazz, blues and American roots staples.

Up next is another cover version take from Ry Cooder’s self-titled debut released in 1970. The original version was by Blind Alfred Reed and appeared on the Victor Label in 1929. Other covers of it include the version by The New Lost City Ramblers in 1959 the more recent Bruce Springsteen version in 2006.

Here is another cover track which is the title track of Ry Cooder’s third album released in 1972. It is a track that really shows how Cooder can take a song and make it his own. The original version was released in 1929 under the different title of The Railroad Boomer and was by Bud Billings and Carlson Robinson.

Here we have a live track released in 1977 from the live album Showtime which is a combination of a Tex-Mex polka piece and a Woody Guthrie song. Ry Cooder’s cover of “Do Re Mi” was originally featured on his 1970 debut. Both of the tracks have a heavy political stance and date back to the 1940’s and 50’s.

Here is a number taken from the soundtrack to the movie The Long Riders released in 1980 which was directed by Walter Hill and starred David Carradine. Ry Cooder won the Award for best music score at that year’s Los Angles Film Critics Association Awards. The title track of the soundtrack is also great but this instrumental is the most beautiful track on it.

Here is a hit that Ry Cooder plays on that was written by Randy Newman for Eric Burdon and The Animals that put him on the map. There are also two well known covers: the first by Three Dog Night released in 1970 and the second by Tom Jones and the Stereophonics in 1999. It was taken from the album Eric is Here in 1967.

As stated in the introduction to this list, during the 1980’s Ry Cooder recorded several film soundtracks, the most notable being his work for the movie “Paris, Texas” in 1985. It is a crucial piece of work in Cooder’s back catalogue that really shows off his use of slide guitar. This particular piece had a big impact in Spain, so much that it used as the theme to the Spanish series “Documentos TV.”

Ry Cooder was a frequent collaborator with film director Walter Hill and the soundtrack to the film “Crossroads” released in 1986 also featured the talents of blues legend Terry Evans and harmonica player Sonny Terry. The song was originally by Robert Johnson, a player who Cooder had loved since his teens.

It is safe to say that Ry Cooder has been a part of many great collaborations during his career, but just off the top spot of this list is this somewhat overlooked masterpiece that he recorded with the Irish folk group The Chieftains in 1995 taken from the album The Long Black Veil. Band member Matt Molloy plays flute on this tracks to which Cooder’s eastern-style riff makes a wonderful accompaniment.

At the top spot is this track that Ry Cooder originally recorded for a Japanese television commercial in 1981. A year later, Cooder recorded it with Freddy Fender for the soundtrack to the film The Border. This version would later be included on the 1995 compilation Music By Ry Cooder which was a compilation of Ry Cooder’s film themes. Cooder would also record it again for the album Get Rhythm released in 1987 which featured guest vocals from actor Harry Dean Stanton. The song has been covered many times since by the likes of Willie Nelson and Bob Dylan and Bruce Springsteen have made unofficial versions of it.