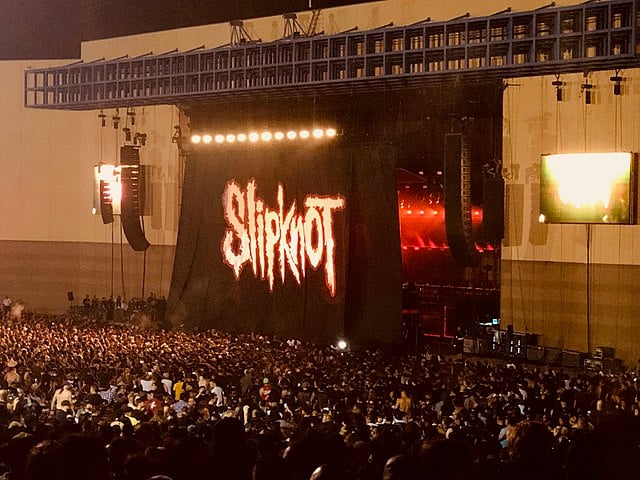 Our Top 10 Slipknot songs looks at one of the twenty-first centuries biggest metal bands who were formed in Des Moines, Iowa in 1995. These guys are nothing like Metallica or Megadeth or Iron Maiden, Slipknot have developed their own original sound and very unique and for some people quite scary stage persona. After several line-up changes they finally settled on a line-up which featured nine members. The three founding members were percussionist Shawn Crahan, drummer Joey Jordison and bassist Paul Gray. The rest of the band during their initial years was sampler and keyboardist Craig Jones, guitarist Mick Thompson, vocalist Corey Taylor, DJ Sid Wilson, percussionist Chris Fehn and second guitarist Jim Root.

They are known for their striking image where all of the members wear masks and the fact that their music is very heavy, aggressive, nihilistic and misanthropic for such a successful and mainstream band. Both of these things are key ingredient to their live shows which are known to be both theatrical and chaotic at the same time.

Their self-titled debut album was released in 1999. This was followed in 2001 by Iowa which was a massive success despite being very uncommercial in nature. Over the next couple of years the band took a brief hiatus during which several of the members embarked on other projects such as Murderdolls (Jordison) and Stone Sour(Taylor). The re-emerged in 2004 with their third album Volume 3 : The Subliminal Verses which showed a new and mature direction for the band which was met with much acclaim and success. Over the next few years, they would take another hiatus before releasing their fourth album All Hope is Gone in 2008 which topped the Billboard Chart. They would continue the tradition of releasing their albums sporadically with their next albums emerging in 2014 and 2019.

In total, Slipknot have sold over thirty million records worldwide and are one of the most successful modern metal acts of the past twenty years. Whilst they have faced their fair share or criticism and controversy, they nonetheless have a strong following of fans (known as “maggots”) who have remained very loyal throughout their career. So without further ado, let us look at what their ten best songs are from their career…

Kicking off our top ten Slipknot songs list is song taken from the band’s second album Iowa released in 2001. It was the second single to be taken from the album. The song was remixed by producer Terry Date to be included on the “Resident Evil” soundtrack. It reached number forty-three on the UK singles chart and was nominated for best Metal Performance at the 2003 Grammy Awards.

Up next we have a song from Slipknot’s third album Volume 3: The Subliminal Verses. The song showed a new direction from the band as it is slower and more melancholy in nature than what they were known for at the time. The album also included a song called “Vermillion Part 2” which was an acoustic song. It got to number two on the US Rock and Metal Chart.

This next song was the lead single from the band’s self-titled debut released in 1999. It usually the closing song of their live concerts. It was originally recorded as the lead track for the demo of the album. They initially attempted to re-record it but were unsatisfied with the sound so decided to insert the original recording on to the album.

Next we have a more recent song that so far there only single not to be included on an album although its was included on the Japanese version of the album We Are Not Your Kind. It had a music video directed by the band’s percussionist Shawn Crahan. It was the band’s first single in three years and was the last song to feature percussionist Chris Fehn before his dismissal from the band.

Ending the first half of this list we have a song that a lot of people would probably expect to be a little higher taken from Volume 3 : The Subliminal Verses released in 2004. As the album’s lead single, it marked a new era for the band after their return from their hiatus. It is one of the band’s biggest hits and one of the classic metal anthems of the 21st century.

Kicking off the second half of this list we have the band’s debut single which, as you can probably guess is taken from the debut album. It was commercially successful upon its release and is one of Slipknot’s signature tunes. It is one of the staples of the early era and was memorably performed on an episode of the British tv show “TFI Friday” to a rather stunned looking audience. The show’s host Chris Evans also wrongfully introduced it as “Bleed and Wait.”

Next up we have the lead single from Iowa. It was commercially successful, getting to number thirty on the US Billboard and twenty-four in the UK. In 2002 it was nominated for Best Metal Performance at that year’s Grammy Awards. It had a music which video received rather heavy rotation on music channels at the time of its release.

At number three we have single number three from album number three. It was nominated for a Grammy Award for Best Metal Performance in 2006 which it won. The song is based off a much earlier song from Slipknot’s career, the song in question being “Carve” taken from their demo days. The video was the first to have the band perform without their masks, although their faces were obscured.

Just off the top spot is the title track from the fourth Slipknot album released in 2008. It was also the lead single to be released from the album. In some ways it is a return to the earlier sound, with the apocalyptic themes and death metal-inspired riffs. According to drummer Joey Jordison the song was very much a collaborative effort between all of the members.

At the top spot we have the second single to be taken from Psychosocial. It was first released as a digital single in July of that year. It was nominated for Best Metal Performance at the 51st Grammy Awards and for Best Single at that year’s Kerrang! Awards. The song does show a more mellowed side to the band. This is the point in Slipknot where several members had worked with other bands in between and it would seem that their sound has perhaps become more varied as a result of that. It successfully charted high in several different charts across several countries.