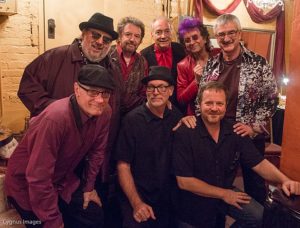 Our top 10 songs list from The Ides of March looks at the catalog of an American band that shared the spoils of the flourishing ’60s and ’70s rock scene. The band was founded in 1964 under the name “The Shon-Dels.” Without hesitation, the band hit the studio for the release of their first single, “Like It or Lump It.” The band would later change its name in 1966. A new title, The Ides of March, was suggested for the band by its bassist Bob Bergland. If the band’s name sounds familiar, you probably might have read (or heard) about Julius Caesar by Shakespeare.

Success came knocking at the doors of The Ides of March after the release of the hit “You Wouldn’t Listen.” The song saw The Ides of March enter the Billboard Hot 100 for the first time, with the song rising to number forty-two. Soon, the band decided to add trumpeter Steve Daniels to its lineup to add some glamor to its song’s instrumental vibe. However, Steve would be replaced by horn players Chuck Soumar and John Larsen only two years after playing with The Ides of March. Most of the band’s songs since then featured the horns prominently.

The band’s bassist Bob Bergland would take an extra role in the band, having him play the tenor saxophone. One of the biggest pillars to the band’s success was its vocalist and frontman Jim Peterik (also the founder of Survivor). Jim Peterik also penned lyrics to some of the best songs from The Ides of March. The band added Ray Herr from The Legends of Time to double up as vocalist and rhythm guitarist. Ray Herr would share the lead vocalist role alongside Jim Peterik, allowing Jim to have adequate time on the lead guitar.

The Ides of March and The Cryan’ Shames have one thing in common: Both bands received success initially without support from a major record label. Inspired by the band’s success in Chicago, Warner Bros. Records secured a recording contract for The Ides of March. What followed was a mainstream success, thanks to the release of the hit “Vehicle.” The song was at the time the fastest-selling single in the record label’s history. “Vehicles” reached number two on the Billboard Hot 100, unable to rise above “American Woman” by The Guess Who.

The newfound success had the band tour the US extensively alongside big names in the industry, including Led Zeppelin, Jimi Hendrix, and Janis Joplin. Ray Herr left the band in 1970 and later changed his name to Ray Scott, starting the group Orphanage. However, with the group not rising to mainstream success, Ray Scott relocated to Nashville, where he launched his career as a country musician. On the other hand, everything was going on well for the band.

The Ides of March released its sophomore album Common Bond (1971), which featured awe-inspiring hits such as “L. A. Goodbye.” While the song was not as successful as “Vehicle,” it managed position seventy-three on the Billboard Hot 100. After that, however, everything took a new twist, starting with the band signing with RCA Records. A change in the band’s sound was also noted with their new album World Woven. Sadly, none of the songs released under their new album was a hit.

Despite the attempts to revive their fame with Midnight Oil (1973), success in the flourishing rock scene proved to be a hard nut to crack. Eventually, the band went on hiatus in 1973. However, it wasn’t the end for everyone in the band. The disbandment was a blessing in disguise for Jim Peterik, who, after the split, went on to form the legendary rock band Survivor. Unfortunately, a union with The Cryan’ Shames would not resurrect the career for the band, which remained on hiatus until 1990, where the members decided to reunite. More than fifty years in the rock scene, the band is still making rock music thrive, just like the newly revived band ABBA. Here we present you with the ten best songs from The Ides of March.

Coming in at number ten is the upbeat hit “Girls Don’t Grow on Trees.” It is quite a shame that this ravishing hit received insufficient airplay. “Girls Don’t Grow on Trees” brings out the best of the band’s musicianship. Thanks to the insightful lyrics that the song hooks us from the beginning to the end. The Ides of March unleashes great instrumentation for this ballad which serves it right by adding a catchy vibe to its overall feel. Ray Herr (now Ray Scott) received his first appearance as a member of the band in this song.

The Ides of March might not have made a comeback like ABBA, but their song “Swagger” reminded us of a once reputable band from the ’60s and early ’70s. Decades of releasing no major hit, The Ides of March had something to pride itself with finally. “Swagger” finds the band teaming up with former Grand Funk Railroad guitarist and singer Mark Farner. The song brings the best of the attitude of a man whose determination keeps him on the move even in tough times. Mark Farner and The Ides of March take us back to the good old rock vibes of the ’70s with this stomping rocker.

Coming in at number eight is the hit “Home,” a pianissimo song from the album Vehicle (1970). The song features some of the best lyrics ever penned by the band. “Home” is delivered in awe-inspiring vocals over some great strings and horns. The term home is held in high regard by many. When the band wished to reunite after some long time in hiatus, the members had no better place to be than their hometown for their Summerfaire Concert. More than twenty thousand people attended the concert.

The Ides of March were quite a reputable act in the late sixties and early seventies, having them release top hits such as “Melody.” “Melody” is featured in the band’s album Vehicle (1970). What makes the song quite a hit is its expressive vocals backed up by some sublime instrumentation. The horn and the bass in this song adds to the song’s glamor making it one of the best releases from the band.

Number six on our top 10 songs from The Ides of March is the hit “Tie-Dye Princess.” The song features some heavy drumming that is quite unique. Jim Peterik mentioned in an interview that the drums on the song sound like cannons. Again, the horns in the song add some charm to the song. Just a few seconds after the song’s first minute, some awe-inspiring vocals are ushered in, having them followed up by absolutely captivating backing vocals. Prepare to dive in pure rock vibes from this eleven-minute song from The Ides of March.

“Roller Coaster” is a 1966 ballad that reminds us of the burgeoning rock scene in the mid-’60s. The song features hard-hitting and rattling guitars riffs that provide the song with a powerful melody. If you love massed vocal harmonies, then this upbeat hit might suit you well. “Roller Coaster” was quite a successful release having it reach number ninety-two on the Billboard Hot 100.

When the famous comic book was published back in 1939, the whole world got in the “Superman” hype. Many wished to be associated with some superheroes like superman. The Ides of March had their version of “Superman” back in 1970, credit to Jim Peterik, who penned the song. Jim just realized that he could spice up his romantic talk and chase for a woman by promising to be her “Superman.” If this worked for you back in the days, you probably should let us know! Five for Fighting, Eminem, Black Lace, and Goldfinger are some artists who have released a song under the same title (but different lyrics).

Jim Peterik was quite a force to reckon with back in the days when it came to penning lyrics to songs (he still can pull a surprise I am sure). He is the brains behind this vocal-driven hit from the band’s sophomore album Common Bond (1971). The best about this song is how the band presents to its fans and the rock scene with magnificent harmonies. Despite “L. A. Goodbye” being a sad ballad, Jim Peterik and the background vocals make it a great song. The song peaked at number seventy-three on the Billboard Hot 100.

Coming in at number one on our top 10 songs from The Ides of March is the hit “Vehicle.” The song was penned by Jim Peterik, having it released as the band’s lead single to the band’s 1970 album Vehicle. Its lyrics allude to a lady who Jim revealed used him to get to where she wished. “Vehicle” saw the band hit commercial success, having it termed as the then-fastest-selling song in Warner Bros. history. However, this horn-driven rock vibe was mistaken by rock fans to be a song by Blood, Sweat, & Tears, a popular act in the days. “Vehicle” was The Ides of March’s best performing song on the Billboard Hot 100, having it peak at number two.

Top 10 Songs From The Ides Of March article published on Classic RockHistory.com© 2021