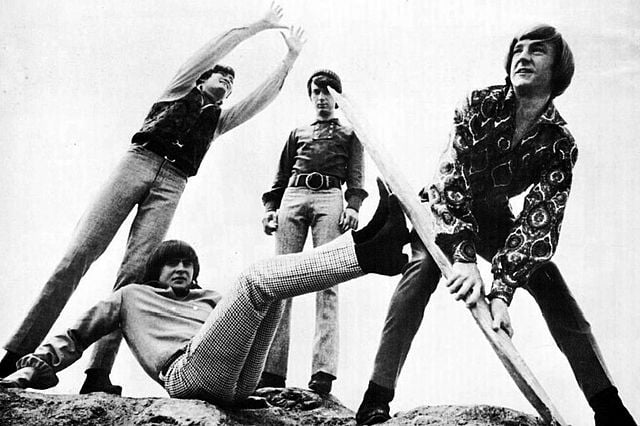 Our Top 10 Songs from the Monkees lists takes a look at one of the most fascinating stories in classic rock history. A group of actors and musicians were brought together to star in a television show about an imaginary band trying to become the Beatles. All set up by TV producers and music industry people. However a funny thing happened along the way, the imaginary band called the Monkees actually became a real band. But not just a real band, the Monkees became one of the biggest bands of all time. Four young men, Davy Jones Peter Tork, Mickey Dolenz and Michael Nesmith became four of the most popular names on both sides of the Atlantic in the late 1960s.

The Monkees broke up in 1970 but got back together in 1986. Over the years they toured the oldies circuit and released new music and compilation albums. However, the heart of their catalog stems from the late 60s. In 2020, only two members of the band are still alive. Both Davy Jones and Peter Tork have passed away. Currently, in 2020 Mickey Dolenz and Michael Nesmith have announced new tour plans for The Monkees.

Our top 10 Monkees song list as a tribute to the band. The list focuses on most of the material during the glory years in the late 60s from 1966 to 1970. We all have our favorite Monkees songs but these lists are put together for people who may not be too familiar with the band. It’s also always a great deal of fun to count them down and choose our favorites.

Well how can we compose a top 10 Monkees songs list and not include the legendary theme song from the Monkees TV show. For most of us, this was the first Monkees song we ever heard. If you were alive in the 1960s as a kid, as a teenager or even as an adult, this one will bring you back. You can’t escape it.

Continuing with our top 10 Monkees songs list we turn to a song written by Neil Diamond. If there ever was a songwriter that the Monkees would want to thank it would be Neil Diamond. They had some of their biggest hits with Neil Diamond songs. The great song “A Little Bit Me, a Little Bit You,” was released in 1967. The song went all the way to number two on the Billboard Hot 100. It hit number one on the Cash Box Hot 100.

The Monkees song “Porpoise Song (Theme from Head)” was released as a single in 1968. The song was written by Carole King and Gerry Goffin.  The song was featured in the movie Head. I just love the Psychedelic Rock feel of this one. Easily one of our favorite Monkees songs.

Looking back at the time period In which the Monkees had the most commercial success on the pop charts, one could see that the majority of their hits happened between 1966 and 1970. The Monkees single “Oh My My” was one of their last hits, but just barely made the top 100 in 1970. Still, a great song in which you can hear how the sounds of pop music were beginning to change. In 1970, soft rock music was starting to become very popular featuring artists such as James Taylor, Jim Croce, Gordon Lightfoot and many more.

“Randy Scouse Git” is one of the most interesting song titles that we have ever heard. And of course, it was a song written by drummer Micky Dolenz. (our favorite member of the band) Come on, he was so funny on the show! The song was a much bigger hit in the United Kingdom than it was in the United States. In the United Kingdom the song hit number two on the pop music charts. The song was released on the Monkees album Headquarters. The album was released in 1967.

As we continue on into the second half of our top 10 Monkees songs list, we turn to the fantastic song “Valleri.” The song was released on the album The Birds, The Bees & The Monkees. “Valleri.” was a the top 10 hit for the Monkees. The song peaked at number 3 on the Billboard Hot 100 in 1968. The song was written by Tommy Boyce and Bobby Hart. Davy Jones performed the lead vocals on the track.

The last four songs to appear on this top 10 Monkees songs list were the biggest songs of the band’s career. “(I’m Not Your) Steppin’ Stone,” was originally released as the B-side to “I’m a Believer.” However the song became a hit by itself as a B-side reaching number 20 on the Billboard Hot 100.

The big time hit “Pleasant Valley Sunday” was released on the Monkees album Pisces, Aquarius, Capricorn & Jones Ltd.  The album was released in 1967. It was the Monkees fourth studio album. The song “Pleasant Valley Sunday,” was written by Carole King and Gerry Goffin. It was a top 10 hit for the band reaching number three on the Billboard Hit 100.

In second place on our top 10 Monkees songs list we have a tie. We just could not decide between the two songs so we placed them together at number two. “Last Train to Clarksville” was the first single The Monkees ever released. They were off to a great start because their first single hit number one on the US Billboard Hot 100. The song was released in 1966. With the great John Stewart song “Daydream Believer” The Monkees had themselves another number one in 1967.

We close out our top 10 Monkees songs list with the legendary Neil Diamond song “I’m a Believer.” The song was released in 1966 and went straight to number one. The song stayed at number one for almost 2 months. It became not only the Monkees biggest hit ever, but one of the biggest selling songs in classic rock history. It was the number one selling song in 1966.