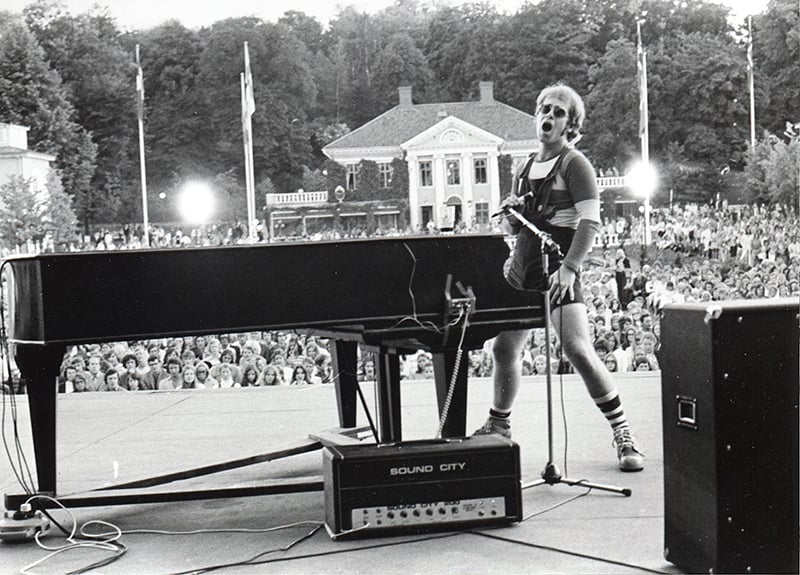 Creating a list of the 10 best Elton John b Sides is almost as difficult as creating a list of the 10 best Elton John songs, or even the top 10 underrated Elton John songs. Elton John has released almost more material than any other single artist in history. His output between 1970 and 1976 was unparalleled and astonishing. No one will ever come close to releasing as many great songs and albums as Elton John did during that amazing run in the 1970s. Some Elton John fans believe that fantastic run ended with Blues Moves. Of course some will argue it has never ended. Now as all Elton John fan know, Elton John’s career did not end in 1977 after Blues Moves, the gears just shifted. There were still many great albums and singles to come. 1983’s Too Low For Zero, The One in 1992, and the incredible album Songs from the West Coast in 2001 (hard to believe its been almost twenty years since that one was released) are some of our favorite Elton John albums of all time.

As of 2020, Elton John has released thirty studio albums since 1970. That does not include the seven soundtrack albums, four live albums and all the compilations. What is really amazing is that Elton John has released 133 singles throughout his career. That’s a massive amount of music to be released by a single artist and his lyricist Bernie Taupin. Of course, Elton John did use other lyricists at times, but most of his classic recorded output has been written with Bernie Taupin.

With a catalog of 133 singles, to choose from, picking ten is pretty much impossible. Buts that what we do here, its part of the plan and fun. The only condition we placed on this list was that the songs were b sides that were non album tracks upon original release. It still was not easy to do because there were so many great Elton John b sides. Nonetheless, we hope you enjoy our picks.

Opening up with our top 10 Elton John b sides list we turn to the song “Lonely Boy,” The song was the b side to the single “Too Low for Zero” which was also the title track to Elton John’s 1983 album Too Low For Zero. The song also appeared as the b side to the single “Passengers,” which was released on Elton John’s 1984 album Breaking Hearts. Many fans thought “Lonely Boy,” was recorded during the 1970s due to the feel of the song. It doesn’t sound like anything he was doing in the early 1980s. However, a close listen reveals that Elton John was playing keyboards that sounded more modern than anything he had played on in the 70s. In fact, they sound like the same keyboards he used on “I’m Still Standing,” which was released on the Too Low For Zero album.

I always thought that the flip side to “Little Jeanie,” was a better song. This great track “Conquer The Song,” was released in 1980 as the b side to “Little Jeanie,”  1980 was a strange year for music. New Wave Music was exploding. It seemed like that might be the thing for the rest of the decade. However it burned out rather quickly as hair bands and Metal became the dominant force in rock and roll. The great pop stars of the 1970s seemed lost for a while. You could hear it in Elton John’s first couple of albums of the 1980s like 21 and 33, The Fox and Jump Up. Good pop albums, but but they just could not compare to what he had done in the 1970s.

Elton John’s song “House of Cards,” was released as the B-side to the single “Someone Saved My Life Tonight.” The legendary single was released in 1975. The song “Someone Saved My Life Tonight.” was originally issued on the album Captain Fantastic and the Brown Dirt Cowboy. The greatest Elton John album of all time, at least in this writer’s opinion.

If one ever wanted to explore how much Leon Russell inspired Elton John, look no further than this great track “Sugar On The Floor.” The song was released as the b side to 1975’s “Island Girl.”The A die was the lead single from Elton Johns Rock of the Westies album. The first record Elton John had released with his new band.

Many of the best Elton John b sides and non album singles were released during the Caribou album release in 1974. Its incredible how affluent Eton John was during this time period. While Goodbye Yellow Brick Road and Captain Fantastic seems to usually get the highest praise for his best work, one cannot forget the incredible Caribou album and all the great singles, b sides, deep tracks and non album tracks that were released around this album.

This one should score a few points on your pinball machine. This great outtake from the Tumbleweed Connection sessions was released as a b side to the United Kingdom single of “Your Song.” Like many of Elton non-album track b sides of the 1970s, “Into the Old Man’s Shoes,” would be released in the 1990s on the Elton John remastered CD issues of his legendary albums such as Tumbleweed Connection.

Yes we know that Elton John did not compose this great Beatles song, but how in the world could we leave off a duet between Elton John and John Lennon recorded at New York’s Madison Square Garden in 1974. This one smokes. It was released as the b side to Elton John’s great non-album single “Philadelphia Freedom.” “I Saw Her Standing There,” was eventually released on the 1995 deluxe reissue of Elton John fabulous 1976 live album entitled Here and There.

We knew we would place this one at the top of our Elton John B sides list from the start. If your gong to cover a great Beatles song like “Lucy In The Sky With Diamonds,” it sure made sense to cover a John Lennon song on the flip side. The song “One Day (at a time),” was originally released on John Lennon’s Mind Games album. Lennon played guitar and sang backing vocals on Elton John’s fabulous version.

What a single release this was! Both songs were non album tracks. Two of the best covers versions Elton John ever recorded, both released on the same 45 rpm vinyl single back in 1975. If you find one of these old 45’s in a garage sale, chance are it will be pretty scratched up because it will have been played hundreds of times. Both sides!