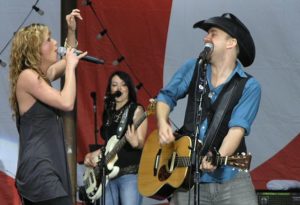 Our Top 10 Sugarland Songs introduce us to an award-winning duo famed for their exquisite country music. Founded in 2002, the group initially consisted of singer and songwriters Jennifer Nettles, Kristian Bush, and Kristen Hall. They all had quite a beautiful music career that helped them receive critical acclaim almost immediately with their 2004 debut album Twice the Speed of Life. While lead vocalist Jennifer Nettles was associated with Soul’s Daughter and Jennifer Nettles Band, Kristian Bush recorded two albums with the Billy Pilgrim duo. On the other hand, Kristen Hall had ventured into a solo career where she had recorded and released two albums.

Their lead-off single “Baby Girl” helped Sugarland gain a cult following, having the song peak at number two on the Billboard Hot Country Songs Chart. Despite the group’s instant success, Kristen Hall left Sugarland, citing the need to stay home and write the songs. However, some fans and critics believe that she was paid to leave Sugarland for image reasons. After quite a successful run, Sugarland went on hiatus in 2012 with Jennifer Nettles and Bush pursuing solo careers. Sugarland proved to be bigger than their solo careers having the two reunite in 2017, releasing the album Bigger less than a year later. The group now has four studio albums, one live album, and a Christmas album on their name. Our top 10 Sugarland songs list looks at the best of the group’s releases that prove Sugarland to be a rare gem in country music.

Ushering us to the top 10 Sugarland songs is the hit “Mother” from the duo’s 2018 album Bigger. The song is a celebration for our mothers who play a pivotal role in our lives, especially the importance of their love. Jennifer Nettles and Bush collaborated in writing the song’s lyrics to show that the mother’s unconditional love possesses lifelong implications. Bush was inspired to write the song about her late mother and what she was like. The song cut its way through to success in a time where religion and sexual orientation were the hot buttons for people proving that a mother’s love is superior.

“Settlin'” is one of the best Sugarland songs from the group’s 2006 album Enjoy the Ride. The song was written by Kristian Bush, Jennifer Nettles, and Tim Owens for the theme song for the 2007 ACC Tournament. “Settlin'” received massive airplay going forth to top the Billboard Hot Country Songs Chart. It would peak at number fifty-four on the Billboard Hot 100.

While Kristen Hall might have left Sugarland, she left quite a mark on the group with her songwriting skills. “Just Might (Make Me Believe)” is the only single released by Sugarland solely written by Hall. The song is featured on the group’s debut album Twice the Speed of Life. Sugarland performed the song on an episode of the American NBC TV series Las Vegas. The song featured quite a long list of outsourced personnel for its instrumental. The song peaked at number seven and sixty on the Billboard Hot Country Songs and Billboard Hot 100 charts.

Featured on the group’s 2008 album Love On the Inside, “Already Gone” is a mid-tempo hit famed for Jennifer Nettles‘ breathtaking vocals. The song is co-written by Sugarland and Bobby Pinson, who the duo outsourced help on other notable releases. Bush revealed in an interview that the song is about relationships that have ended emotionally long before the physical termination. The song describes the narrator’s relationship with her mum and her now ex-fiancée and their final happenstance before moving on. “Already Gone” debuted at number forty-seven, peaking at number one on the Billboard Hot Country Songs Chart.

“Baby Girl” is the debut single for the group Sugarland featured on its debut album, Twice the Speed of Life. Co-written by the original Sugarland trio and Troy Bieser, the song was the group’s breakthrough song. “Baby Girl” became the highest-peaking single by a country music group in over a decade, spending forty-six weeks on the Billboard Hot Country Songs. The song peaked at number thirty-eight on the Billboard Hot 100 Chart.

Number five on our top 10 Sugarland songs is the hit “Babe,” a collaboration between Sugarland and Taylor Swift. The hit is an acoustic breakup song that finds Jennifer Nettles and Taylor Swift chastising a cheating partner for ruining a relationship. Thanks to Taylor Swift and Patrick Monahan of the American rock band Train for the sublime lyrics to the song. The mid-tempo song peaked at number seventy-two on the Billboard Hot 100 Chart. “Babe” also saw Sugarland nominated for tons of awards, winning the 2019 Golden Boot Awards Collaboration of the Year Award.

Featured on the 2008 album Love on the Inside, “All I Want to Do” is a song composed by Jennifer Nettles, Kristian Bush, and Bobby Pinson. This upbeat song is a female-centred hit that has the narrator tell her male partner that all she wishes to do in this world is love him. The melisma in the song’s chorus was inspired by one of Bush’s home videos, which Nettles and Bobby got to watch. “All I Want to Do” was another of Sugarland’s number ones on the Billboard Hot Country Songs, peaking at number eighteen in the Billboard Hot 100.

“Stuck Like Glue” is the first single on Sugarland’s 2010 fourth studio album, The Incredible Machine. Co-written by Sugarland, Kevin Griffin, and Shy Carter, the song has the narrator state that she and her lover are connected or stuck like glue. While most of the group’s songs are majorly country, “Stuck Like Glue” features some magnificent reggae beats in the middle. The song peaked at number seventeen on the Billboard Hot 100 Chart selling almost three million digital copies.

Number one on our top 10 Sugarland songs list is the hit “Stay” from the group’s 2006 album Enjoy the Ride. Written entirely by Jennifer Nettles “Stay” is a cheating and betrayal song regarded by many as the best Sugarland song. Its lyrics tell of a woman having an affair with a married gentleman who promises her that he is going to trash his marital commitment to be with her. However, we realize that at the end of the song that the man seemed hesitant and would barely leave his wife; hence the lady tells him to stick to his wife. The song went ahead to win Sugarland several awards, including the Song of the Year award at the 2008 ACM Awards and two Grammys.