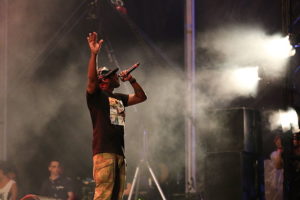 Our Top 10 Talib Kweli songs lots looks at one of the most respected hip hop rap artists in the music business who is sort of a hidden gem among the public. Most of the greatest rap artists who ever released music all started out as conscious rappers. In case we were to prepare a list of the greatest conscious rappers, Talib Kweli would be high on the list. Much of his music focus is on personal stories that inform people about their political and social strife. Over the last 20 years, Talib Kweli has emerged as one of the most politically insightful and one of the most lyrically gifted artists of our generation.

At his peak, the Brooklyn-based rapper could virtually rap over any instrumental that is put across him and tell captivating stories better than any rapper out there. Early in his career, Talib Kweli was in a group called Black Star, which featured fellow Brooklyn rapper Mos Def. Even after he left Black Star, Talib Kweli went on to have a successful solo career.

Over the years, he has to work with some of the biggest names in hip-hop such as Kanye West, Pharrell Williams and Just Blaze. In 2020, Talib Kweli released his latest album dubbed Gotham in collaboration with Diamond D. Talib Kweli is a hip-hop legend. Below are his top 10 greatest tracks.

Our top ten list of the greatest Talib Kweli songs starts off with the track “Hot Thing” from the album Eardrum which was released in 2007. Eardrum is the third studio album from Talib Kweli and it features guest appearances from the likes of Kanye West, Justin Timberlake and Musiq Soulchild.

“Upper Echelon” is the 13th single from Talib Kweli’s 2013 album Prisoner of Conscious. The song was released as a tribute to Masta Ace of “Born To Roll.” “Upper Echelon” has a modern electronic beat as compared to other songs in the album which have a more soul influenced beat.

Our number eight track on the list of greatest songs by Talib Kweli is the single, “Human Mic” from his album Prisoner of Conscious. This song shows how Talib Kweli was able to capture hip-hop purest and raw form with any kind of beat. Prisoner of Conscious got some incredible reviews from critics and featured guest appearances from some of the biggest names in hip-hop such as Kendrick Lamar, Busta Rhymes, Ryan Leslie and Nelly.

The most outstanding thing about Talib Kweli’ songs was that you could listen to them and have a good time and they could also start a train of thoughts in your head. “The Blast” is another song featuring Talib Kweli and DH Hi-Tek as the producer. The song was recorded in 1999 but was released in 2001. With vocals backed by Vinia Mojica, this track features some sombre and jazzy tunes that make it quite unique. The song has an extended video where Talib Kweli throws an extra verse. “The Blast” peaked at position 2 on the Billboard Hot Rap Tracks and position 49 on the Hot R&B and Hip-hop Charts.

The number six track in our list of the best Talib Kweli songs comes from his 2013 album Gravitas. The video of the song gives Talib Kweli’s fans a sneak peek into his life in rap. The video follows him from the backstage of a concert into the stage in front of a house full of screaming fans. The track shows the essence of working hard and climbing your way to the top while also highlighting Talib Kweli’s history-making moments that shaped his career to the MC he is.

The idea behind releasing “2000 Seasons” was to release a track that was extremely wordy and extremely lyrical. This track shows how good a lyricist Talib Kweli was. In an interview, Talib Kweli said that it would be hard for him to perform the lyrics to the song most times since it was so lyrical and so dense. The track is contained in Talib Kweli’s 2015 album Train of Thought.

The number four track in our Talib Kweli Songs list is the first track from his album Groundation, which was released in 1997. “Manifestation” contains some incredible lyrics with Talib Kweli’s Intelligence seen in each verse. The track is of utmost significance to Talib Kweli since it is the one that showed how much his group, Reflection Eternal had evolved to one of the most serious hip-hop groups of the time. With lines such as, “Through your tunnel vision I’m shinin light like a train” and “Supply and the demand it’s all capitalism,” this track is a hip-hop classic.

Narrowly missing out on the top spot is Talib Kweli’s 2010 song “Just Began.” It is the second single from the album Revolutions per Minute and it features some amazing verses from J.Cole, Jay Electronica and Mos Def. The song contains some samples from “We’ve Only Just Began” which was performed by The Singers Unlimited. The artists in the track complemented each other well with J.Cole evidently being at his peak.

The undisputed number one song on our list of the greatest Talib Kweli’s songs of all time is the single, “Get By” from the 2002 album Quality. The song was produced by Kanye West and it features some incredible background vocals from Kendra Ross, Chinua Hawk and Abby Dobson. Much like the song, the video portrays the struggles of low income people from diverse cultural and racial backgrounds.

The video, which was released in 2003 features Kanye West and was filmed in different locations in New York, Chinatown and Times Square. The song was also remixed by fellow Brooklyn rappers Busta Rhymes, Jay-Z and Mos Def. “Get By’ is undoubtedly Talib Kweli’s most successful song. It peaked at position 77 on US Billboard Hot 100 and at position 29 on US Billboard Hot R&B/Hip-Hop Songs.