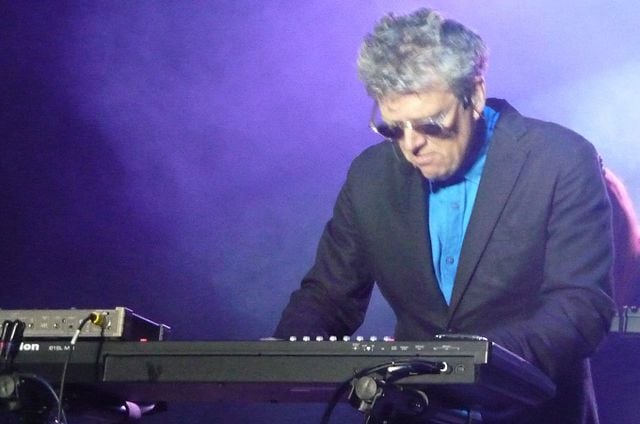 The Thompson Twins are a British pop band who were active from 1977 to 1993 when they renamed themselves Babble. When they first started they were a New Wave band but they soon became more mainstream pop-oriented which they had much success with during the 1980’s. When they first formed in 77 they were all living a very poor lifestyle on very little money and often squatting in abandoned properties. They had quite a lot of line-up changes in their early days and recorded their debut album A Product Of…(Participation) in 1981.

Their success came when they downsized to a trio the following year in 1982. Over the next few years they would start to have worldwide success, with their music going in a much more pop direction as opposed to the post punk sound of the earlier years. Then in 1986, they were downsized even more to a duo when member John Leeway left.

When they changed their name in 93 it was because they took their music in a different direction-going from pop to more dub-influenced music. They continued for the next three years before finally disbanding for good in 1996. Since then they have remained defunct, with there being no talk of any kind of reformation.

The Thompson Twins were one of the most successful acts of the eighties and had a lot of brilliant and successful hits. So here at Classic Rock, lets see what the ten best songs are…

Kicking off our Thompson Twins songs list is this single released in 1984 that is the partial title track of the album released the year titled Into The Gap. It was not released in the Twins native UK but it was successful in the US where it spent six weeks on the Billboard charts and peaked at number sixty-nine.

Up next is the Thompson Twins third single from Into The Gap. It is their highest charting single, getting to number two in the UK where it remained for eleven weeks. In the US it spent nine weeks on the Billboard 100 where it peaked at number forty-four. It makes use of a harmonics and also features a melodica solo.

This song is the Thompson Twins second single from their third album released in 1983 titled Quick Step and Side Kick which was re-titled Side Kicks in the US. The lyrics were originally written by band member Alannah Currie but were later altered to come from a male perspective as she was not the lead singer. In the Uk it was their first top ten hit where it got to number nine. In the US it got to number forty-five on the Billboard.

This track was released in 1986 and was written as part of the soundtrack for the movie of the same name starring Tom Hanks. It is notable as being the first successful hit for the Thompson Twins after they became a duo with the departure of Joe Leeway. It was written by Alannah Currie and Tom Bailey and got to number fifty four on the US Billboard.

This next track was released as the lead single from the Thompson Twins sixth album released in 1987 titled Close To The Bone. In the Uk it peaked at sixty-six in the charts and remained in the top 100 for four weeks. It was more successful in the US where it got to number thirty-one on the Billboard.

Up next we have the lead single from the Thompson Twins seventh album released in 1989 titled Big Trash. After Close To The Bone had not been very commercially successful, the Thompson Twins signed with Warner Brothers who gave them freedom creatively rather than demanding that they record another commercial pop album. As a single it was not very successful in the UK where it only got to ninety-seven in the Top 100. It did however fare much better in the US where it got to twenty-eight. However, it holds a notable place in the band’s discography as being their last number to enter the Billboard charts.

This is the third single from the Thompson Twins fifth album Heres To Future Days released in 1985. There are two version of the song, both of which have various remixes and different edits. The first is the British version which is more synth based and the second is the American version which is featured on the album and contains electric guitar. It was the band’s final Uk Top Forty hit where it got to number twenty-two. Like many of the Twins songs, it was more successful in the US where it got into the top ten at number eight.

This is the second single taken from Into The Gap. It was very successful in the United Kingdom where it got the number three as well as eleven in the United States. It was also successful in several other countries including Canada, Germany, Switzerland , New Zealand and South Africa. The album was produced by Alex Sadkin who had produced the previous album Quick Step and Side Kick.

Just off the top spot we have the Thompson Twins first single from Quick Step and Side Kick. Although it only got the number sixty-seven in the UK, it is yet another Thompson Twins single that did better in the US where it got to number thirty. It also topped the American Dance chart where it remained for two weeks.

At the top of this Thompson Twins songs list we have this song from Into The Gap which got to number four in the Uk becoming their biggest selling single and their first in Britain to get into the top five. It is also their most high charting single in the US where it got to number three and remained there for twenty-one weeks.