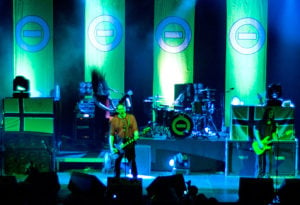 There are bands that produce lustful music, bands whose music is overly sensual, and then there is Type O Negative. After the break up of Carnivore, a New York-based crossover band, Peter Steele and Josh Silver joined up to form, Fallout, a short-lived band. The band added Kenny Hickey and Sal Abruscato to create Repulsion, which later changed its name to Type O Negative.

The band also changed their style of music from a ragtag hardcore act to a blend of goth metal, psychedelia, and gothic rock. In addition, Peter Steele’s love and adoration for women make them sound like they worship a goddess of female sexuality. The band’s first album, Slow, Deep, and Hard, which was released in 1991, was a continuation of where their former band had left off. However, their breakthrough album would come two years later, in 1993. Although most of their fans expected more abrasive punk songs from the album dubbed Bloody Kisses, they got something totally different.

The album featured tracks that had a blend of Black Sabbath with a sprinkle of Beatles-inspired pop. Although the songs were incredibly catchy, they were somehow multifaceted and a bit elliptical. Some songs like “Christian Woman,” ran for over seven minutes, although the track was later edited. Nevertheless, the album was unique, and the way the music flowed with little hidden messages proved that the guys were geniuses.

The album also became the first for their record label (Roadrunner Records) to be certified platinum by the RIAA. Another album dubbed October Rust, which explored the themes of sexuality and nature, followed. Although the album was not quite as successful as Bloody Kisses, it was certified gold and made its debut on the Billboard Top 200 at position 42, making it their first album to achieve that feat.

Until Peter Steele’s death in 2010, which signified the death of the band, they had released seven albums and done several tours across the globe. We have come up with a list of the band’s top 10 tracks, which is guaranteed to send blood rushing through your ears. Here are the top 10 Type O Negative songs.

Even after his death more than ten years ago, Peter Steele would be glad knowing that although he died and the band disbanded, their music still lives. And what a great song “Everything Dies” is. According to Peter Steele, the track is quite personal, and he always has a hard time performing it since he has to disassociate himself. The song’s video is shot in a shipyard, similar to where his father worked as a shipyard supervisor.

9. Love You To Death

What I love most about this track is its heavy metal sound, which is so addictive. The track contains a mixture of The Beatles, a haunted piano, and some gothic sounds. “Love You To Death” is the lead single off the band’s album, October Rust. If you’ve never listened to any of the band’s songs, this would be a perfect introduction to the band.

This track contains one of the most colorful metal video clips ever. Peter Steele’s deep vocals are absolutely amazing in this song, and the instrumentals are out of this world. In the song, he describes a polyamorous relationship and how he feels about it. The song has a lighthearted mood and is contained in the band’s 1996 album, October Rust.

7. In Praise of Bacchus

This track features some female vocals from the female choir by Val lum. In the song, which was released in 1997, Peter Steele talks about how his girlfriend hates him to the extent that he wants him burned. The song is quite underrated and one of my favorites from the album, October Rust.

If you are a fan of WWE, you probably know that this song was supposed to be Kane’s entrance theme song. However, WWE never used it. The song is quite haunting, and the immediate riff is a bit intimidating. If WWE had used this theme song, Kane’s character would probably have been three times more evil.

The most unbelievable thing about this song is that its lyrics were dedicated to a cat. The cat named Venus was Peter Steele’s most beloved pet for around 17 years before she passed away. “Bloody Kisses” is contained in the band’s 1993 hit album, Bloody Kisses.

Many Type O Negative fans might disagree with the inclusion of this song at number four. And honestly, I agree with them. The interlude and outro of this song are outstanding, and Peter’s vocals are so deep that he sounds as if he is doing some death metal growls in some parts. The song contains two videos and is inspired by a woman who was involved romantically with Peter Steele.

“Anaesthesia” is one of the band’s most liked songs ever. The track is contained in their 2003 album Life Is Killing Me. The grand piano melodies and Peter’s vocals, especially at the end of the track will give any goth metal fan goosebumps. The song is about being in a dark place to the extent that you become insensitive to pain hence the name “Anaesthesia.”

The number two song in our list of the best Type O Negative songs is the song “Wolf Moon,” which is contained in the band’s 1996 album, October Rust. The song is an absolute masterpiece, and it shows how good the band was at singing amazingly dark romantic music. The howl towards the end of the song is incredible and will send shivers down the spine of any goth metal fan that listens to the song.

The top song on our list is a track that Peter Steele apparently wrote while driving a garbage truck. “Black No. 1 is the band’s ultimate “anthem.” The track features some well-developed lyrics, and the video features Peter Steele playing an acoustic 12 string guitar while the keyboardist wails on a grand piano.