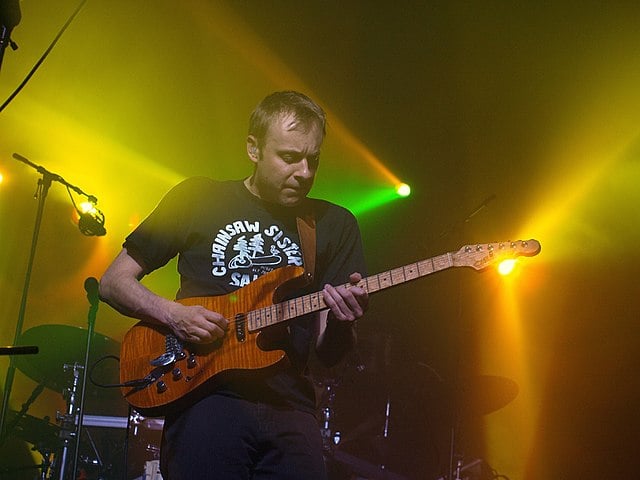 Our Top 10 Umphrey’s McGee songs list looks at an American jam band from Indiana whose music combines rock, metal, funk, jazz, blues, and folk. Umphrey’s McGee were first formed in 1997 when they were all students at the university of Notre Dame and released their debut album Greatest Hits Volume 3 a year later. The album was very hastily put together and has been long out of print. This was followed in 2002 by Local Band Does OK which is their first proper recording. After this they nearly broke up when drummer Mike Miro left to attend medical school. After hundreds of auditions they recruited Kris Meyers as his replacement. The next album was released in 2004 and was titled Anchor Drops. After the recording of this album the band scored a distribution deal after which their second and third albums were widely available in chain stores.

The fourth album Safety in Numbers which featured vocal contributions from Huey Lewis was released in 2006 and was followed a year later by the double album The Bottom Half. The next album Mantis came out in 2009. This album had a unique marketing campaign which saw the band offer bonus material to fans who pre-ordered the record. The more pre-orders it received, the more bonus material the fans would get.

The next two albums were Death By Stereo in 2011 and then Similar Skin in 2014. In between these releases they launched a project called Headphones and Snow cones which was a service offered at their concerts which enabled fans to experience the music via a set of headphones plugged in to a wireless recorder.

From the years of 2011 until 2018, Umphrey’s McGee released a yearly “Hall of Fame” album which was a collection of songs voted for by the fans which are considered to be the best from the respective years live shows.

In 2015, they released their ninth album The London Session. This was followed in in 2016 by the remix/covers album ZONKEY. 2018 saw the release of both their eleventh and twelfth studio albums Its Not Us and Its You.

Kicking off our top ten Umphrey’s McGee songs list is this track from their eleventh album Its Not Us released in 2009. The song is a mixture of progressive rock, funk, and jazz. The song is rather reminiscent of Primus. All in all, it is a very good song that has very effortless flow to it and is very well played.

Next up is this track from Zonkey from 2016 which is a mashup of the song’s “Sad But True” by Metallica and “Clint Eastwood” by Gorillaz. The whole album was a collection of mashups of covers of various songs which were all performed by the band. Other artists covered on the album to name a few are Nirvana, Bob Marley and Phil Collins.

Up next is the title track of Umphrey’s McGee’s eighth album released in 2014. The album was recorded at IV Lab Studios in Chicago Illinois and was the first album to be put out on the band’s own record label Nothing Too Fancy Music. Although the album still has elements of the jam band sound it also has elements of more conventional rock and pop.

Next up on our Umphrey’s McGee Songs list is a track from the band’s seventh album released in 2011. This song, which has its own music video is a very funk-influenced number and shows a more mellow side to the band. It is reminiscent of a lot of seventies funk and soul and is also rather jazz influenced as well. It is another very good track that really shows how diverse Umphrey’s McGee can be.

Here we have the very long title track from the band’s sixth album released in 2009 which is over eleven minutes long, being a true example of their progressive side. When the album was announced for pre-order, it was also announced that the album would be released with bonus material and that the more pre-orders that were made, the more bonus content would be “unlocked.” This was praised as a brilliant way to start a pre-order campaign. The band continued to offer more bonus content by releasing it online through PUSH entertainment. To access this content, the cd is used as a “key” on the PUSH website. The content, which includes live and demo material, is still updated every month even today. This album is also unique in that it is the only one in the band’s catalogue comprised entirely of songs that had not previously been performed live.

Kicking off the second half of this Umphrey’s McGee Songs list is the title and opening track from Umphrey’s McGee’s fifth album released in 2007. The album was recorded during the sessions of their previous album Safety in Numbers during 2005-2006. It is a double album with the first disc comprising of songs that were left off the previous album and the second featuring demos and outtakes.

This track is taken from UM’s fourth album released in 2006. This track features a guest appearance from Huey Lewis. This album is much more accessible than most of their other work featuring a much more stripped back approach and with little progressive or jam band elements. It got to 186 on the Billboard 200.

At number three is the title track of Umphrey’s McGee’s third album released in 2004. This album was the debut of drummer Kris Meyers. This album is a mix of prog, folk, jam, metal, and electronic music. The album features a horn section which includes saxophonist Karl Denson on the track “Wife Soup.”

Just off the top spot is this track taken from the second album Local Band Does OK which was the first album to feature Jake Cinneger and Andy Farag. It is also the final album to feature original drummer Mike Miro. The album is very progressive rock  oriented. It is the earliest album in the band’s catalogue that is still available and in print.

At the top of this list, we have this track taken from the band’s debut album Greatest Hits Volume 3 released in 1998. The album was recorded only eight months after the band formed and was done hastily for them to get local gigs. The first pressing was limited to 400 copies and the band’s name was misspelled on the CD’s spine. Despite this, it successfully sold out within three months of being released. After this a larger second pressing of 1000 copies was put out. This is the only album to feature the original four-piece line-up. Even though the album is long out of print, several of its songs remain in the band’s live sets.