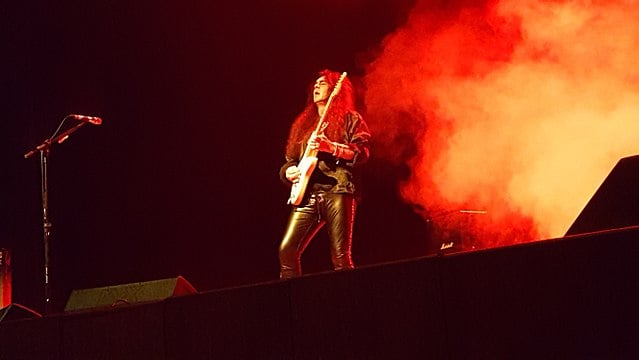 Our Top 10 Yngwie Malmsteen song list looks back at a guitarist from Stockholm, Sweden who stands as one of the greatest guitarists of all time. Known for his neoclassical style pf guitar playing, Yngwie Malmsteen has released over 20 studio albums throughout his career. Before the release of his first solo studio album in 1984, Yngwie Malmsteen had played with bands such as Alcatraz and and Steeler. Yngwie Malmsteen’s solo studio albums have involved a rotating lineup of musicians in his band called Rising Force. He has gone through various lead singers throughout the years as well as drummers, bassist and keyboardists, Yngwie Malmsteen’s catalog is filled with a mix of instrumental and vocal music echoing the metal sounds of the 80s and 90s made famous by bands like Iron Maiden. However no guitarist has ever sounded like Yngwie Malmsteen who mixed the concepts of metal and neoclassical that produced a sound very unique and original. Most fans have always referred to him as Yngwie Malmsteen. But all his records have always been credited Yngwie J. Malmsteen. We will use both names in this article out of respect for the artists and the fans.

We wanted to open up our top 10 Yngwie Malmsteen Songs list with one of his best. Many fans would argue this is his best. Whatever side your on, there is no denying how fantastic this piece of music is. From its opening to the end, it smokes,  it burns, it scorches everything in sight. Yngwie Malmsteen’s “Far Beyond The Sun,” was released on his debut album entitled Rising Force. The album was released in 1984.

Continuing with our top 10 Yngwie Malmsteen Songs songs list we take a listen to the very slick production of “Demon Driver.” This one sounds a little different from the rest of Yngwie Malmsteen’s catalog. That is until Yngwie Malmsteen is unleashed with one of his most out of the world guitar solos of his career. There’s just something about this one that we have always loved. The live versions of this song are incredible. You won’t be able to get this one out of your head.  “Demon Driver,” was released on the album entitled Eclipse. The record was released in 1990. This one featured Göran Edman on lead vocals, Mats Olausson on keys, Michael Von Knorring on drums and Svante Henryson on bass guitar.

Don’t you love the sound of dual guitars?  That’s what you get on the opening to this famous Yngwie Malmsteen song “I Am A Viking.”  This warrior style track was released on Yngwie Malmsteen’s second album entitled Marching Out. The album was released in 1985. The album featured the musicians Jeff Scott Soto on lead vocals, Jens Johansson on keys, Anders Johansson on drums and Marcel Jacob on bass.

Breaking into the second half of top 10 Yngwie J. Malmsteen Songs songs list we turn to the majestic track Seventh Sign. Listen to Yngwie Malmsteen’s guitar solo at the five minute mark. Unbelievable!  The track was released on the album titled The Seventh Sign. The album was appropriately titled as it was Yngwie Malmsteen seventh album release. This was his biggest selling album of his career. It’s his only album to go platinum. The album was released in 1994. The album featured Michael Vescera on vocals, Mats Olausson on keys and Mike Terrana on drums.

At number four on our top 10 Yngwie Malmsteen Songs songs list we present the heartbreaking turn your life upside down inside out ballad “Dreaming.” The song was released on  Yngwie Malmsteen’s forth album entitled Odyssey. The lead vocals on the track were song by the fabulous legendary vocalist Joe Lyn Turner who had also sang lead vocals in Ritchie Blackmore’s band Rainbow.

This is one of the best metal songs ever released. It’s right up there with the best of bands like Iron Maiden, Dokken, Dio and all those metal groups with vocals. Mark Boals sings vocals on this phenomenal track. Jens Johansson  plays keyboards. Anders Johansson plays the drums. Yngwie Malmsteen unleashes one of his greatest guitar solos of his career on this one.

At number two on our top 10 Yngwie Malmsteen Songs songs list is one of Yngwie Malmsteen’s s most popular recordings. “Black Star,” was released on Yngwie Malmsteen’s debut album entitled Rising Force. This is an incredible piece of music that’s not just full speed ahead all the way through. Its dynamic, it’s emotional it’s just simply brilliant,