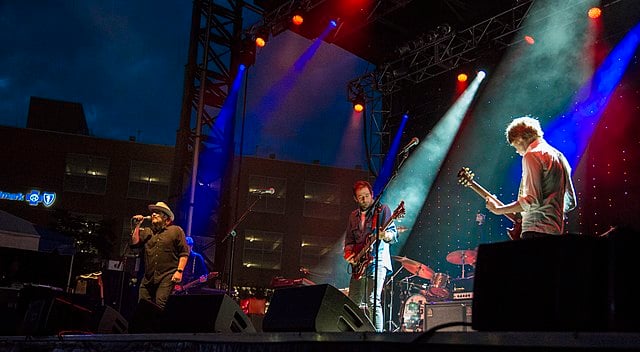 Our top 10 Wilco songs introduce us to an American rock band formed after the split of Uncle Tupelo, an alternative country group. With the departure of singer Jay Farrar, Wilco was established, with the band redefining itself from time to time as its lineup changed. However, influential singer Jeff Tweedy and bassist John Stirratt have stood with the band since its inception till date. Notably, the band boasts up to eleven studio albums and a double album. Wilco has sought inspiration from the musical style of famous artists such as The Beatles and Bill Fay while influencing tons of rock acts of the modern era. The band, therefore, brings harmony between rock music in the 60s and 70s and modern rock hence playing a pivotal and reputable role in the rock music genre. Here are the top ten Wilco songs we can barely forget.

Starting off our list of the best of what Wilco offered the world in their prime years is their song “I Must Be High.” Coming from their 1995 debut album A.M. the song is a contemplative acknowledgment of a romantic misjudgment. The song follows Tweedy’s romantic misjudgment template for most of the songs he wrote for the band. Here, the persona acknowledges having lost his mistress in quite some great lyrics accompanied by an infectious melody. With the song being in their debut album, “I Must Be High,” it makes one of the songs that attracted quite some audience to the newly formed Wilco band after the breakup of Uncle Tupelo.

The song “Ashes of American Flags” is regarded by many as the emotional centerpiece of the band’s most popular album. Wilco’s 2002 album Yankee Hotel Foxtrot is probably the band’s most significant record having it feature remarkable songs. In fact, many Americans found quite some solace in the song following the 9/11 attacks thanks to its melancholic tone and theme of alienation. The song speaks volumes about the feelings of helplessness that many people experienced in the wake of the 9/11 tragedy. However, in the midst of despair for everyone chasing the American dream lies some optimism.

Coming from Wilco’s 1999 album Summerteeth, the song “A Shot in the Arm” remains one of the band’s greatest songs, thanks to its evocative lyrics. All credit to Jeff Tweedy, to whose lyrical prowess the song’s success is credited. Contrary to what some might think the song addresses, ‘a shot in the arm’ is just a desperate wish for peace or rather a spot of encouragement. All the persona needs here is some encouragement to love a woman even though she is not the same girl he fell in love with since she’s changed. In a great way, this song borrows much from The Beatles, “I’m Looking Through You,” which also addresses a girl who changed too.

Coming also from Wilco’s 1999 album Summerteeth is a chilling murder ballad released in the reflection of the dark side of the existence of human beings. The song starts off with some provocative lines of how the persona dreamt of killing someone. As if this wasn’t enough to spark the thought of the human nasty dark side of murder, the band added some imagery in the following line on how the cold blood of the murdered ran to the sea. The song finds a balance between the band’s acoustic side and their daring, experimental tendencies in bringing out songs that we can emotionally relate to.

“Handshake Drugs” is a great ballad from the Wilco band where Jeff Tweedy poses as a lyrical genius for the band, having him question himself on who he has become on this druggy tune. The song’s first line, ‘I was chewing gum for something to do,’ might bring quite some lazy effect to the jam. However, thanks to the adventurous saxophone tunes that the song makes quite some great comeback to the hearts of many rock lovers. With the song being about being someone you might not be for the sake of others, you will definitely fall in love with the jam and Tweedy’s sense of exasperation in his voice too.

Yet from the band’s most popular album Yankee Hotel Foxtrot is the song “Poor Places.” Notably, the song explores ways in which we all feel quite disconnected from everyone else. This is despite the ‘connectedness’ that mass transportation and technology offer us. The speaker talks about how he finds himself caring about what’s happening around him. However, Wilco offers quite some optimistic belief that we can still overcome the bad feeling and danger that is generated by growing apart in this complex world.

With the song “Misunderstood,” the band takes us back to their alternative country roots under the name Uncle Tupelo. The song is the opening jam from Wilco’s opener from their album Being There. However, the song is also included from their live record Kicking Television with the ballad proving to be one of the greatest of their release. The song tells a narrative of a musician who gets back to his former hometown just to find he is barely appreciated by his former friends. This leads to their unforgettable line, “I’d like to thank you all for nothin’ at all.”

Even when the world seemed to have started appreciating new rock artists, Wilco fans could barely get enough of what the band has to offer. Thanks to the great support, that band has kept releasing music with their song “Impossible Germany” from their 2007 album Sky Blue Sky making it big on the airwaves. Recorded in Jeff Tweedy’s rehearsal space, Tweedy’s performance matches up to his creative lyrical prowess. For most Wilco fans, the song speaks much about unrequited love.

Coming in at number two is the song “Jesus, Etc.” from Wilco’s popular album Yankee Hotel Foxtrot. You ought to love this ballad by Wilco owing to their ability to create some poignant musical moments with quite some solidarity that few songs can barely match. It is the song’s minor key and mid-tempo shuffle that combine with Tweedy’s surreal vocals to make one of the band’s greatest jams. The song summarizes everything to the fact that “Our love is all we have,” as depicted by its lyrics.

As is all from the album Yankee Hotel Foxtrot wasn’t done, we have Wilco’s song “I’m Trying to Break Your Heart,” the band’s greatest song of all time. It might feel like a cliché, but Wilco put in quite some great effort in their 2002 album, having most of their great songs come from it, thanks to the emotions the songs get to evoke. Notably, this ballad is all about a delusional man who tries to connect up once more with an ex during a drink-filled night. You ought to love Glenn Kotche’s drumming skills in the song, as well as the lyrical prowess of Jeff Tweedy in this jam.