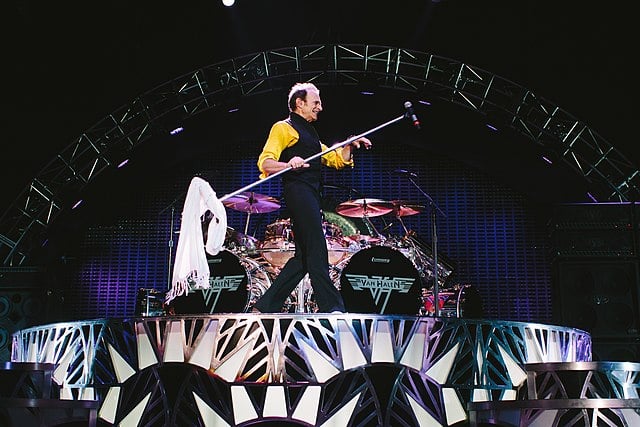 Like we wrote in our Sammy Hagar Van Halen albums ranked list, we are a fan of both singers. Both Sammy Hagar and David Lee Roth brought their own unique perspective and talents and rock and roll to create great music with the Van Halen family and Michael Anthony. Still, we are keenly aware of the old school Van Halen fans that only loved the David Lee Roth years. So this article is for them.

We open up our David Lee Roth Van Halen albums ranked list with Van Halen’s 1982 album entitled Diver Down. For many Van Halen fans Diver Down was a major disappointment. There were 12 songs recorded for the album or should we say 12.  tracks. Out of the twelve tracks recorded for the album, five of them were cover songs. Of the seven remaining tracks, three of them were one and half minute instrumentals. There was actually only four new full length original Van Halen songs on the album. And the longest one was only three minutes and forty seven seconds long. Were all the tracks great? Yes, of course, but a new studio album with only four new full length tracks was more of a letdown for fans than anything else.

I was not expecting this album to be as good as it was. Sure, many of the songs were heard before in bootlegs, but not in this quality. I think the last thing Van Halen fans were expecting in 2012 was a new Van Halen album with David Lee Roth on lead vocals. The standout tracks on this one included the roaring track “China Town,” which should have been the first single instead of “Tattoo.” And of course we all loved “She’s the Woman.” The album contained thirteen full length tracks. One of the album’s most distinctive qualities is that it is the only Van Halen studio album without original bassist and the very much loved Michael Anthony.

It is really tough to rank these Van Halen albums because we love all of them so much. Yet, it is a lot of fun to do and it’s just what we do here. Van Halen’s Women And Children First is a killer album. It was very different from their first and second albums for two reasons. Women And Children First was the first Van Halen album to contain no cover songs. It was time to say goodbye to their years of nightclub work. The group had established themselves as a major rock and roll band on the scene and it was time to just deliver only original music. The second reason was the band sounded much heavier on this record. A sound that would really come to fruition on their next album entuited Fair Warning. This is a great one!

Van Halen’s second album simply titled Van Halen II sounded very similar to their first record. It almost sounded like both albums were recorded at the same time. They were released only a year apart as Van Halen I came out in February of 1978 while Van Halen II was released in March of 1979. The album contained only one cover song in the album’s opening track “Your No Good.” So many classic Van Halen songs were released on this one including the album’s debut single “Dance The Night Away,” which was certainly written to be a hit. Other favorites include “Beautiful Girl,” “Somebody Get Me a Doctor,” “Bottoms Up,” “D.O.A.” and “Light Up the Sky.

The arrival of the Oberheim OB-Xa  on the musical instrument market would have a profound effect of the change of sound on Van Halen’s 1984 album release entitled 1984. It really should have not been a surprise for those who knew that Eddie Van Halen had grown up taking classical piano lessons. The 80s was the decade of keyboard oriented music, but no rock band utilized the synthesiser as well as Eddie Van Halen did on in the 1984 album. The combination of that big OB-Xa sound and Eddie Van Halen’s virtuoso innovative guitar playing resulted in the band’s only number one single of their career in the track “Jump.” Yet, there were many more outstanding tracks on the album that blew up all over the world in 1984.

“Hot For Teacher,” stands as one of the best tracks Van Halen has ever recorded. And how could we forget the song “Panama,” or “I’ll Wait,” which resulted in songwriting credit by Michael McDonald who was brought in to help out on the track by Ted Templeman. This album got lot of spins on everybody’s turntables.

At number two on our David Lee Roth Van Halen albums list stands the band’s debut album simply titled Van Halen. The album was released in February of 1978. Van Halen’s debut album in 1978 presented rock fans with one of the last new great rock bands of the 1970s.  In the late 70s when Punk and New Wave Music were really ruling the airwaves, it was great to have a new rock and roll band hitting the market. And no one had ever sounded like Van Halen before.

We are not going to list standout tracks because every song and recording on this album is amazing. Side one just blew everybody away. Opening with “Running With the Devil,” and then “Eruption,” which is one of the greatest guitar instrumentals of all time, fans were out of breath before they even got to the third track. And the third track “You Really Got Me,” was the band’s hit single. It was a killer rocking version of The Kinks classic tune. Which then ran into “Ain’t Talkin Bout Love,” which stands as one of their all-time greatest rock and roll songs they ever released.

And there’s just so many more great songs on their debut album. We go back and forth with this one on and Fair Warning. In fact, on our first top 10 Van Halen Albums list when we combined both David Lee Roth and Sammy Hagar Van Halen albums and published it almost seven years ago, Van Halen I was our number one choice.

We think most Van Halen fans or at least the old school Die Hard Van Halen fans would agree with us that Fair Warning was their best album. From the albums’ opening track “Mean Streets,” to the last cut “One Foot Out The Door,” Van Halen’s Fair Warning rocked harder and more heavier than any of the Van Halen album ever released. There was no shenanigans with this one, no jokes, no comedy, no cover songs, this is just pure heavy dark rock and roll. There’s a bit of a Black Sabbath style on this record. A band that Van Halen once opened up for. Fair Warning was not a big seller. There were no big time hits with the exception of the airplay that “Unchained,” received. And that’s alright with us, because this was Van Halen sounding as powerful as they have ever sounded.