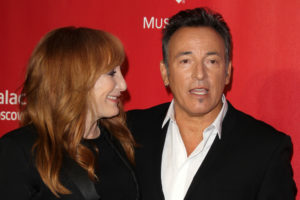 Sony’s Purchase Of Springsteen’s Catalog for five hundred million dollars that was just leaked has turned many heads in the industy while shocking long time Bruce Springsteen fans who have always been proud of the Boss for pretty much not allowing his songs to be used for commercials. It was a shock when he did the Jeep commercial at last year’s Super Bowl, but at least it was done in an artistic way. Well, we should have known something was up because of that. Does Sony’s purchase of Bruce Springsteen’s catalog serve as a prelude for hearing songs like “Born In The U.S.A,” sell Fords, Buicks and Chevrolets? No one is saying yet, but we doubt that a major cooperation like Sony would spend 500 million purchasing a music catalog and be told that they are limited as to what they could do with it.

Bruce Springsteen is  not the first legendary classic rock star to sell his catalog to a huge cooperation. Bob Dylan made huge headlines last year when he sold his entire musical catalog to Universal Music for three hundred million dollars. It’s interesting and very telling that Bruce Springsteen supposedly has gotten two hundred million dollars more than Bob Dylan received. Bob Dylan has a much bigger catalog than Bruce. Yes, we know the reference your all thinking right now.

It’s not just Bob Dylan and Bruce Springsteen that have sold their legacies, Neil Young just recently sold his catalog to Hipgnosis Songs Fund Limited. However, Neil Young only sold fifty percent of his rights to the company and there is supposedly an agreement that Neil Young’s music cannot be used to sell products. Besides purchasing Bruce Springsteen’s catalog, Sony music also recently purchased Paul Simon’s catalog. Springsteen, Dylan and Simon have been longtime Sony artists. In 1988, the Sony Corporation purchased CBS music which owned Columbia Records which was the oldest still in business record company in existence having been around since 1887.

The biggest question everyone will have now is will Sony use Bruce Springsteen’s music to sell products. For fifty years rock and roll fans have had to endure hearing some of their most loved songs turned upside down by advertising agencies using classic rock songs to sell anything from jeans to cars. There is nothing worse than hearing a song that had so much meaning at one particular point in your life suddenly become a shill to sell you a product. From  Steppenwolf’s “Born to Be Wild” being used to sell a can of Pepsi to the classic Johnny Cash song “I Walk the Line,” persuading you to buy a pair of Levis, hearing those songs selling products does some pretty intense damage to their legacy for hardcores rock fans. Yet, that damage if there is damage, won’t really last that long for one simple reason…..we are all getting pretty old.

Its sad, but true, most of Bruce Springsteen’s long time hard core fans, the ones that would get the most upset at “Cover Me,” being used to sell Reynolds Warp are all 55 and older. Dylan’s hardcore audience is even older with most of the extreme fans in their 70s and above. Just think about how long Columbia Records was around. Sony Music is thinking big picture here. Actually they are probably thinking motion picture. While owning Sony Music, Sony also own Sony Pictures. Song placement in motion pictures is big business. Expect to see many Springsteen songs being placed in motion pictures produced by Sony Pictures because the only entities Sony will have to pay the rights to use the music in their movies will be themselves.

The younger audience that they are hoping to use these catalogs with have grown up with artists constantly selling products with their music. Snoop Dogg sells just about everything. Hi rap for Corona Beer is just about the worst thing we have ever heard.  Many of the current hip hop artists are pretty much just products themselves selling glamour and fame over substances.

There is no new music being released that will have the lasting impact that the songs in the catalogs of Springsteen, Dylan, and Simon have. These are musical treasures. Hopefully the executives at Sony understand the power and importance behind these songs. The problem is executives come and go. With each new generation that takes power in the corporate world, the artistic value of a Springsteen song will become less and less important while the potential earning of a song’s value will. Roll Over Bruce Springsteen, and tell Bob Dylan the News….