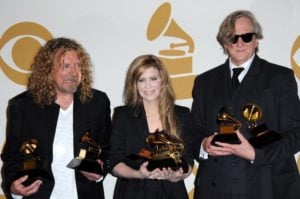 The pairing of Robert Plant & Alison Krauss seemed very odd at first fourteen years ago to many people. Yet anyone who really understood the work of Robert Plant would truly understand the depth of his art. Even during his Led Zeppelin days its wasnt all “Whole Lotta Love,” and “Rock and Roll.” Just take a listen the music he composed on Led Zeppelin III and the celtic melodies and lyrics that have always resonated throughout his songwriting. There has always been connections to country and bluegrass music. Of course the art or rock and the blues lent itself more to improvisation than traditional bluegrass standards that stick to the melodies and lyrics without deviation, but as an artist, Robert Plant has always seemed to be someone to embrace the art that certain musical traditions are defined by.

On the new album Robert Plant & Alison Krauss push the envelope of their musical arrangements by hiring some brilliant musicians to play on the album. By hiring the renowned guitarist Bill Frisell to play on the album, the two were assured to embrace some extraordinary sounds from a guitarist who sounds like no one else in his utilization of a sort of avant garde jazz country style approach to playing The man is a guitarist’s guitarist whom is known for crossing boundaries that have not yet been explored. Marc Ribot is another guitarist who was hired to play on the album that offers an original approach to guitar playing that has made him a mainstay to working with artists that like to push boundaries such as Tom Waits, Elvis Costello and John Zorn.

The very underrated David Hidalgo of Los Lobos also plays on the record.Robert Plant also brought along his guitarist Buddy Miller to play on the album. Playing bass on the record is Dennis Crouch who has played with everyone from Elton John to John Mellencamp to Diana Krall. Manning the drums is Jay Bellerose who is one of the most sought after drummers in music having recorded with hundreds of well known artists. Both Dennis Crouch and Jay Bellerose played on the Raising Sand album.

Eleven of the twelve tracks on the album are cover versions. The album contains only one original song credited to songwriters Robert Plant and T-Bone Burnett entitled “High and Lonesome.” Most of the songs on the record that have been recorded by Robert Plant & Alison Krauss come from the 1960s, The two cover The Everly Brothers classic “The Price of Love” that was originally released in 1966 by The Everly Brothers. The great Bobby Moore and The Aces are covered with their 1965 song “Searching for My Love.” Robert Plant’s love for the music of Bert Jansch shows up as the two cover the spectacular Bert Jansch song “It Don’t Bother Me.” The album’s first single release called “Can’t Let Go,” was composed by Randy Weeks and was released by Lucinda Williams on her legendary album Car Wheels on a Gravel Road back in 1998.

Even though it has been fourteen years since Robert Plant & Alison Krauss released Raising Sand, T-Bone Burnett has been quoted as saying that they all kept in touch over the years talking about songs with the idea that they would eventually do it all again. And why not? Raising Sand was such a phenomenal success on both an artistic and commercial level. It was loved by critics and won six Grammy Awards. Only time will tell if their new album Raise The Roof will repeat that same success. We can’t wait to find out.