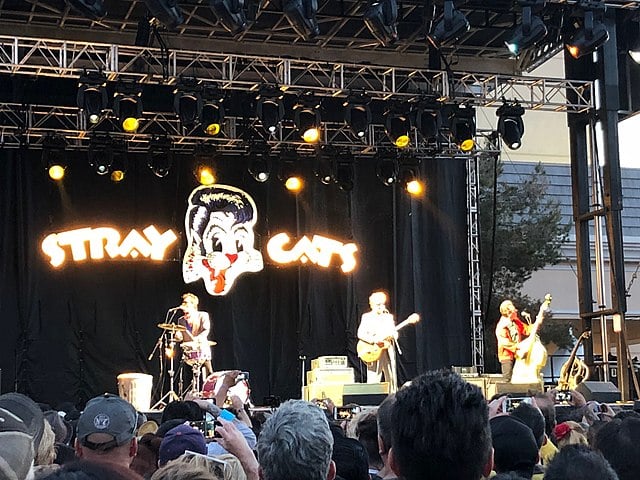 Our Stray Cats Albums Ranked list takes a look back at all the great Stray Cats albums released during the band’s swinging rock and roll career. The Stray Cats released their first two albums in the United Kingdom in 1981 and 1982. The band’s third album entitled Built For Speed would become their debut in the United States and would turn the group into a household name actually around the world. The Stray Cats broke up in the early 90s as Brian Setzer embarked on a solo career performing with the big band he put together together called the Brian Setzer Orchestra. In 2019, Stray Cats returned once again to release their most recent album entitled 40

In 2019 The Stray Cats returned with a fantastic album entitled 40. The album title came from the band being together for 40 years since they started performing in 1979. This was a rocking swingin album that featured some great new songs. All three original member were on board including Brian Setzer, Slim Jim Phantom and Lee Rocker. The highlight of the album was the great track “Cry Danger.”

The great Stray Cats album Choo Choo Hot Fish is one of those albums that simply got away. Choo Choo Hot Fish was the band’s seventh studio album. The album was released in the spring of 1992. A time when bands like Nirvana, Soundgarden and Pearl Jam were dominating rock and roll radio. It just wasn’t a time for bands like the Stray Cats anymore. Nonetheless, this was a great Stray Cats album. The record featured some really great recordings such as the album opener “Elvis on Velvet.” Other standout tracks included the single Cry Baby and the great Santo & Johnny song “Sleepwalk.” One of our favorite songs on the album was the Brian Setzer tune “Cross of Love,”

Gonna Ball was the Stray Cat’s second album released in the United Kingdom. It was not released in the United States. However five of the songs were released on the band’s US. debut album Built For Speed a year after this album was released. The band’s second album featured a guest appearance by the great Ian Stewart who was one of the founding members of The Rolling Stones but wound up becoming their road manager instead. The great Ian Stewart played on many Rolling Stones tracks and was the piano player who played that rocking eighth note piano lick on Led Zeppelin’s “Rock and Roll,”

The band’s third single released from their debut album in the United Kingdom become another stray cat classic entitled “Stray Cat Strut,” which hit number 11 on the United Kingdom music charts. The Band’s debut album also contained  some other great songs such as Rumble in Brighton and the songs “Jeanie, Jeanie, Jeanie,” and Double Talkin’ Baby.” The album was produced by the great rockabilly musician Dave Edmunds.

In the number two position on our Stray Cats album list is the bands phenomenal album Rant n’ Rave with the Stray Cats. The album was released on August 15th 1983. It was the Stray Cats fourth studio album release and second one in the United States. As the third album shared a great deal of material from the first two albums, the band’s fourth album was really the first new Stray Cats album of all new material. Sales of the album were fueled by the success of the album’s big time hit single “(She’s) Sexy + 17.” The song was a top ten hit in the United States peaking at number five. Other standout tracks on the album included the song “I Won’t Stand In Your Way,” and “Look At That Cadillac,” both hits that broke into the Billboard top 100. Once again, the album was produced by Dave Edmunds

We close out our Stray Cats albums list with the band’s U.S. debut album Built For Speed. The album would become the band’s most popular album of their career. This album was huge when it was first released in the United States. Fans of the band in the United Kingdom had already heard all the material on this album as six songs on the album had been previously released on the Stray Cat’s debut album in the UK called Stray Cats. Another five songs on the Built For Speed album were taken from the Stray Cats second UK album Gonna Ball.

The Built For Speed album hit number two on the United States Billboard Top 200 album charts. It went all the way to number one on the US Cashbox album charts. The album has since sold one million copies in the United State and two million copies in Canada. The album did not chart in the United Kingdom because it was not released in the UK. All the big hits from their two UK albums were on the record including the songs “Baby Blue Eyes,” Rock This Town,” “Stray Cat Strut”, “Rumble in Brighton”, “Runaway Boys”, “Double Talkin’ Baby” and “Jeanie, Jeanie, Jeanie””Little Miss Prissy”, “You Don’t Believe Me”, “Rev It Up and Go” and “Lonely Summer Nights”)