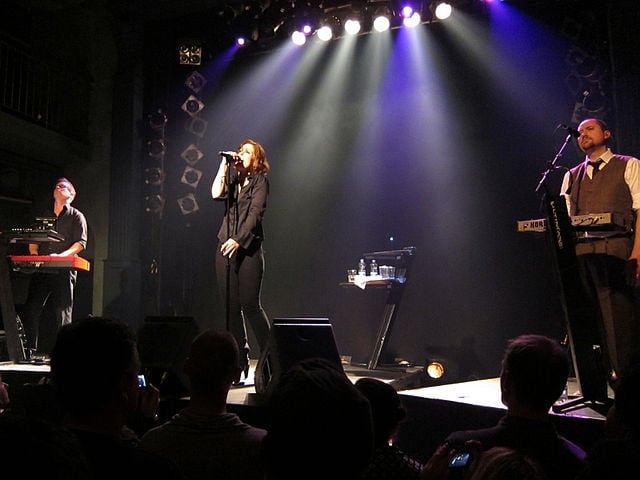 Our Top Alison Moyet Songs list takes a look at the fabulous musical career of one of the finest pop singers of the past four decades. We first became fans of Alison Moyet when we heard her on the radio singing the classic Yaz song “Don’t Go.” After recording two amazing records as a duo with  Vince Clarke formally of Depeche Mode, Alison Moyet went out on her own and released her first solo album in 1984 entitled Alf. From that point on, Alison Moyet would celebrate a very successful musical career with exceptional success in the United Kingdom. While she never broke that big in the U.S, she still sold considerably well enough to release major label albums on a worldwide basis. Our top 10 Alison Moyet songs list presents a variety of songs from her solo career. This list does not include any of the Yaz (Yazzo) songs she recorded with Vince Clarke. Those classic tracks will be presented in a separate article.

We open up our top 10 Alison Moyet songs list with a really great track called “When I Was Your Girl.” Truthfully, we didn’t know whether to open or close this Alison Moyet songs list with this great song. Like an album opener, you want to capture the listener instantly, and that is why we opened up this list with this fabulous song. “When I Was Your Girl,” was released on the 2013 album The Minutes. It was released as the lead single from the album. This was an incredible record by Alison Moyet and stands as one of the best of her career.

As we continue our top 10 Alison Moyet songs we turn to the first of two standards included on this list. Interestingly, Alison Moyet’s version of Allan Roberts and Doris Fisher’s standard “That Ole Devil Called Love,” would wind up being the highest charting single of Alison Moyet’s career. The song reached all the way to number two on the UK Singles Chart in 1985. It did not even chart in the U.S. The song was originally written in 1944

The song “This House,” was released on Alison Moyet’s third album entitled Hoodoo. We choose this heart wrenching ballad to present to those only familiar with Alison Moyet’s up beat tempo tunes just how versatile a singer Alison Moyet has always been. But its more than just versatility that defines Alison Moyet; it’s her ability to make you feel every note, and every beat of the heartbreak she sings so expressly about. It’s all here in “This House.”

Alison Moyet’s version of the classic song “Love Letters,” was the second biggest hit of Alison Moyet’s solo career. The song peaked at number four on the UK Music Charts in 1987. The song had been around for a while. The song was originally released in 1945. “Love Letters,” was written by Edward Heyman and Victor Young. The song was released as a non-album track single by Alison Moyet in 1987. Continuing a trend of pop stars singing standards that was started by Linda Ronstadt in the early 1980s, Alison Moyet celebrated her greatest commercial success at least in the UK from covering these classic standards.

The song “Weak in the Presence of Beauty” was the second single released from Alison Moyet’s sensational Raindancing album. Like the first single released from the album, entitled “Is This Love,” “Weak in the Presence of Beauty” was a top 10 hit in the UK peaking at number six. This song took a lot of hits from critics and even Alison Moyet herself who said she disliked the song, but the fans loved it. Here at Classicrockhistory.com we consider ourselves fans, not critics and that’s why it’s at number five on this Alison Moyet songs list.

“Right As Rain,” and “Changekling,” are the second and third tracks from her great 2013 album The Minutes to be listed on our top 10 Alison Moyet songs list. All three songs that have appeared on this list from that fantastic album are distinctively different from each other in terms of melody, feel and arrangements. Yet, all three of them contain a euphoric passionate energy that was what first brought us to love the vocal style and artistry of Alison Moyet. Sorry for the tie, but we had to include both of these.

Our favorite Alison Moyet song of all time was her great hit single “It Wont Be Long.” This is not the same song The Beatles released in 1963, but it does seem to pay tribute to The Beatles at times within the song’s arrangement. The song was released on the album Hoodoo. It was Alison Moyet’s third solo album. It was the lead single released from the record. Hoodoo.was released in 1991 right smack in the middle of the grunge movement when bands like Nirvana dominated radio and pop culture. The song “It Won’t Be Long,” was nominated for a Grammy Award. The song was written by Pete Glenister  and Alison Moyet.