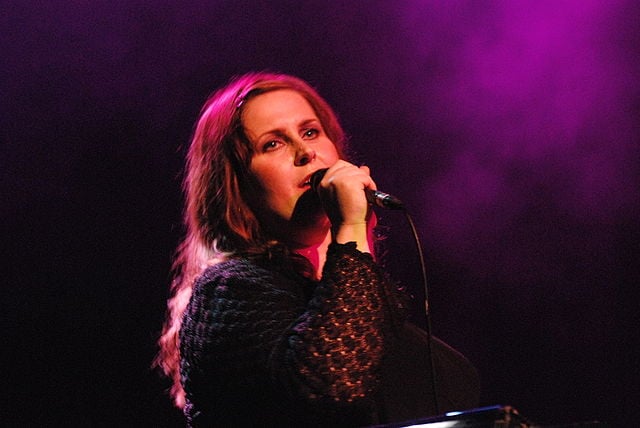 Our Top 10 Yazoo Songs list takes a look at a band formed in 1981 that featured two great musical artists in vocalist Alison Moyet and ex Depeche Member Vince Clarke. Sometimes called Yaz especially in the United States, we have always referred to them as Yazoo The two artists came together and formed a group they called Yazoo. The band would release only two albums together, but the music they released would capture a significant audience that would remain fans of the band for many years into the future. Yazoo stood out among all the other techno new wave bands at the time for two very significant reasons. The first being the songs were extremely well written, produced and extremely captivating and addictive. One never got tired of listening to their two great albums. The second reason was the voice of Alison Moyet.

We open up our top 10 Yahoo songs this with the great song “Mr. Blue.” This one was written by Vince Clarke. The song appeared on Yazoo’s second album You And Me Both. Vince Clarke’s keyboards dance around crisp and clear, happy and somewhat joyous even though the song is entitled “Mr. Blue,” and it has political undertones seeping through. This is one of those songs that sounds happy but it’s actually kind of a sad song. Yet, Alison Moyet sings beautifully as she always does in this great song that is just so perfect to open up our top 10 Yazoo songs list with.

Continuing with our Yazoo songs list return to their first album entitled Upstairs At Eric’s. This fabulous album was released on August 20th 1982. In the ninth spot we present the song ‘Two Pieces.” The song was placed at the second track on side one. Two pieces was written by Vince Clarke. This is a great track featuring a fun Vince Clarke happy synthesizer intro popping all over the place

Continuing with our Yazoo songs list we take a listen to another great song written by Alison Moyet. The song “Ode To Boy,” is a sort of a dark song into voyeurism from the female perspective. Alison Moyet’s vocal on this one is both chilling and seductive at the same time. Vince Clark’s sparse keyboard work on this one adds a somewhat eerie psychological feel that is very effective. The song was released on the album You And Me Both.

In the number seven position on our top 10 Yazoo songs list is the great dance track “State Farm.” The song was originally released as a non album track. It did not appear on the first two albums. It was released as the b side to the single “Nobody’s Diary.” It has appeared on various Yazoo compilations. This is a great one!

This great tune entitled “Goodbye Seventies,” is one of the bigger produced songs on the album Upstair At Eric’s. There is definitely a 1970s disco vibe happening on this one. Alison Moyet lights up the vocal in the chorus section. This one should have been released as a single. Love the backing vocal tracks on this cool tune.

At the halfway point on our top 10 Yazoo songs list is the big time dance to entitled situation. I think this is where Madonna got her laugh from. “Situation,” represents the best of the early 80s electronic dance music. However, Yazoo took dance music from the early 80s to a whole new level because of the incredible vocals by Alison Moyet. The song “Situation,” was released only on the US albums. The song was actually released as the band’s debut single in the US although it really didn’t chart that high.

Yazoo’s second album was eagerly awaited by many fans of the band. The song “Nobody’s Diary,” would be released as the album’s first single. The band’s second album You and Me Both was released in 1983. This one defined sound of Yazoo that we all fell in love with on their first album. Perfect pop music delivered via Vince Clarke’s electronic keyboards and Alison Moyet’s wonderful vocals. “Nobody’s Diary,” would become Yazoo’s third number one single on the US Billboard Dance Charts. The song would hit number 3 on the UK pop charts.

Listen to the sound of those opening keyboards and the notes Vince Clarke is playing. They’re so perfect, they almost sound like their singing vocal lines. The song “Don’t Go,” was Yazoo’s first number one hit in the United States as it peaked at number 1 on the US Billboard Dance charts. The song did not break into the Billboard top 100. However it was a big hit in the United Kingdom. The song also hit number one in Belgium. The only thing that we didn’t like about this song was the pretty bad video they put together for it. However the production of the video is definitely a reflection of the early period of video making.

“Only You,” is that Yazoo song that helped most people first discover the great duo of a Alison Moyet and Vince Clarke. This is one of the great songs of the early 80s. It’s definitely the band’s most popular song and most loved song among most of their fans. It’s just such an exceptional piece of music. It’s the band’s highest charting single in both the United Kingdom and the United States on both country’s mainstream pop charts.

We close out our top 10 Yazoo songs list with the heartbreaking song “Midnight.” While the song was never released as a single and it was in no way as popular as the songs ‘Only You,” and “Don’t Go,” it was by far the standout track on the album. It all begins with Alison Moyet’s desperate plea for forgiveness at the start of the song sung in an acapella performance that just cuts your heart in two pieces. Vince Clarke then works his magic and wraps his wondrous keyboards around the beauty of Alison Moyet’s beautiful voice. This one is really special.