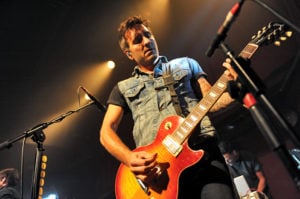 Our top 10 Anberlin songs introduce us to an American band that has been quite notable in the alternative rock and emo music genres. Initially, the original members of Anberlin had in 1998 formed a band SaGoh 24/7, where they released two albums. However, they would disband to establish a new band, with the new name ushering a change in musical direction for the members. The band used the money they had obtained from the few successful shows from their former band to record several demos for their new journey teaming up with producer Goldman. Anberlin would later rework three of the demos they had recorded for their debut album. However, they would have producer Aaron Sprinkle who had helped Acceptance with its demos.

While the band’s debut album might not have charted, several songs, including “Readyfuels,” gained positive reception. The band took on tours with other bands to market their art, a gamble that paid off. However, the band would have some lineup changes, with former rhythm guitarist Joey Bruce headed in a different direction than the other Anberlin members replacing him with The Mosaic guitarist Nathan Strayer. Nathan would later amicably leave Anberlin to return to his former band, leaving Anberlin to take in Acceptance guitarist Christian McAlhaney to take up the role. After successful album releases, Anberlin members stated in 2014 that they were disbanding to celebrate what the band had become. However, the band reunited later, performing several shows worldwide.

Anberlin’s musical style has had critics, and fans characterize the band as a Christian band. However, the band lead vocalist Stephen Christian stands on the claim that the band is not a Christian rock band even though his faith impacts a lot that happens in his life. Our top 10 Anberlin songs list looks at the best of the releases from the band’s seven studio albums.

Ushering us into the top 10 Anberlin songs is “Readyfuels,” a hit song from the band’s album Blueprints for the Black Market. Written by the band members, the song is a sublime rock song that helped Anberlin gain quite some attention despite their debut album not charting. Thanks to the song’s sublime guitar riffs help the band establish itself as a reputable rock and roll band.

“Stranger Ways” is a rhythmic first single off the band’s 2014 album Lowborn. The song is an original composition by Anberlin band members, having frontman Christian state that it entails more of what the band will remember for by the fans and critics. “Stranger Ways” draw influence from rock and roll from the 1980s fused with enchanting melodies and dark dactylic lyrics. The song’s dark theme helps bring to life Lowborn’s eclectic and chaotic feel.

Featured on the band’s 2012 album Vital is a superb alternative rock ballad, “Someone Anyone.” The song was written by Anberlin, with its lyrics alluding to a movement against war and violence. “Someone Anyone” brings out the fact that anyone can start a conflict. However, human beings seem to have developed the ability to solve all their conflicts in a civilized manner. The song was inspired by Egypt’s Arab Spring Revolution.

When the rhythm guitarist Joey Bruce left Anberlin, many knew that he took a different direction than the rest of the other members. However, Christian revealed that Bruce was ejected from Anberlin owing to his love for sex and drugs. The song “Godspeed” has its lyrics allude to how rockstars destroy their lives with too much pleasure as Bruce did and arrogance. One of the song’s verses reminds us of the Sex Pistols Sid Vicious who died of heroin abuse.

Number six on our top 10 Anberlin songs is the nostalgic ballad “Inevitable.” Featured on the band’s album Cities, the song’s lyrics allude to the purity of young love. Anberlin describes a time when people would barely hide or lie about their insecurities and so much more. While that might feel lost, Christian helps us realize that we can reclaim the purity of young love with the phrase “I want to be your last kiss.”

If all of were honest about what we have in mind, very few people would describe happiness in the current state of their life. Most people would talk of their problems, especially the fears and worries what tomorrow carries for them. “The Unwinding Cable Car” has its lyrics allude to a person (read most of us) who is so obsessed with fixing problems of the future rather than enjoying the present moment. Initially, the song was written as a segue between two songs only to be turned into a full song featured on the band’s 2007 Cities.

Anberlin is a perfect description of what artists are having them craft the song “Unstable” from reworking and experimenting with what used to be just acoustic guitars. The result was a poetic song that alludes to acting and reasoning from your mind rather than inspiration from other people. “Unstable” probably motivates one to listen to their inner self rather than rely of much on what other people might have to say, be it friends, family, or even the ever analytical society.

While Never Take Friendship Personal might not have been the band’s best release, “Paperthin Hymn” found a way in people’s hearts to become one of the best Anberlin songs. The song took inspiration from the death of Milligan’s sister. Only twenty-nine years of age, Milligan’s sister succumbed to cancer, leaving a son barely two years old, something that affected the band. Even at the recording time, the band felt it too much to handle, making the song one of their most touching.

“Impossible” is an album-titled ballad that takes us into some philosophy classes. The song’s lyrics draw a parallel to the philosophies of the author of Sun Tzu’s warrior creed. “Impossible” features some philosophical takeaways on how to maintain relationships. Quite a tough thing to relate with, but hi, most of our answers in life are just banked in ancient philosophy only that most of us are too lazy to take a read. The song was featured on the band’s album Dark Is The Way: Light Is A Place.

Number one of our top 10 Anberlin songs is the ballad “The Feel Good Drag” from the band’s album New Surrender. The song became the best Anberlin song owing to its massive airplay more than any of the band’s songs, having its peak at number one on the Billboard Under Hot 100 Singles chart. Christian revealed in an interview that the song’s theme is about heading into a relationship that you know will not work, probably what most of us have done or will do before settling to marry someone!