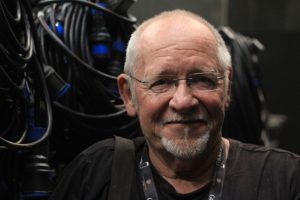 Eric Bogle, though born in Scotland and never losing his accent, is considered one of Australia’s best folk singer-songwriters. He moved to Australia in 1969 when he was 24 and still lives there. He even won the Order of Australia medal. Although many of his songs are directed to Australians and reflect Australia’s history and way of life, many of his songs have resonated with listeners around the world. Like many folk songwriters, his songs are better known by their cover versions than for his own version.

Although best known for incredibly sad songs sung with overflowing emotion, Eric Bogle has written some funny songs, many full of gallows humor. Topics he’s written about include Star Trek, cats getting killed by traffic, dogs getting killed while having sex and humpback whales generally getting killed. Other awards he’s won include a UN peace medal for his anti-war songs. He recorded seventeen studio albums and eight live albums, to date. He retired from touring in 2016. We hope you enjoy the challenging music of Eric Bogle in our top ten list.

Although Eric Bogle put out a compilation album in 1994 called Just the Funny Stuff, most of the songs are not very funny as in ha-ha, but are funny as in peculiar. This one is funny ha-ha. The singer, striving to make a name for himself as a folk singer, is urged by everyone to play Bob Dylan, but keeps on refusing. Until one day. It appears on The Eric Bogle Songbook, Vol. 2 in 1992. This version is from his 2005 live album At this Stage.

This is one of many Eric Bogle songs covered by other artists, such as the Dubliners, Jean Redpath, Fraser Bruce and Martyn Wyndam-Read. The first known cover version was done in 1977 by June Tabor for her album Ashes and Diamonds. Although the song is about the problems of Australian farmers, nicknamed Cockys (short for cockatoos, since they scratched the ground the same as the farmers), it appealed to English, Welsh and Irish folk singers. Although the farmer sings of his rough life, he also sings that he has come to terms with it. Eric Bogle did a few versions of this song, which originally appeared on his 1980 album Now I’m Easy.

Although the song is not specific about why the singer was leaving “my Nancy-O”, Eric Bogle would say in interviews that it was about his own departure from Scotland. It’s a sweet, simple, almost waltz-like song about saying goodbye. It became one of Eric Bogle’s most popular songs, especially among Irish folk singers. The first version came out in 1979 by the Fureys. Eric Bogle’s version came out a year later on Now I’m Easy. It’s also been covered by the Clydesiders, Danny Doyle, Foster and Allen and the Ennis Sisters.

This seems to be the sequel to “Leaving Nancy”, although we could not find any information online to confirm this. Everyone has a dead loved one, so this song has universal appeal. The lover of Nancy is a sympathetic Everyman that sings just about what everyone grieving goes through, “Things aint been the same since Nancy died.” This also came out on Now I’m Easy.

Eric Bogle wrote a lot with fellow folkie John Munro. The album this song appears on, Voices, came out in the same year John Munro died, 2016. This remains the last Eric Bogle studio album to date. In this song, an old man muses about what he will miss when he’s dead – and what he won’t. If you don’t agree with his list, he doesn’t care, ‘cause he’ll be “fucking dead”. It shows a different side to the usually sad or morbid Eric Bogle. Not many songs use the word “carcinogens.”

So, what’s life like in modern Australia? Pretty much the same everywhere else. People own a house, a car, a color TV which plays American shows, dress in Korean clothes and listen to “overseas crap on the radio”. He also mentions “The damn recession won’t go away,” which can still apply today. It’s a happy-sounding song about bleak futures which can apply to just about any country. He sings, “This used to be my home. Now I’m a stranger here.” This feeling of being an alien in your home country is universal, as well as the line, “They’re turning my country into crap – But don’t you worry about that.” Find this song on Eric Bogle’s 1993 album Mirrors.

This collaboration with the late John Munro is a beautiful song about an ugly subject — the life of an alcoholic’s wife. She sings to her baby boy a lullaby with words that would keep the kid awake all night, if he could understand her. She’s abused by her husband. She’s blamed by him for everything “as usual.” Anyone who’s lived with an alcoholic can relate to this poor woman’s plight. She says, “But then I’m used to bleeding.” It’s scarier than most horror movies. This originally appeared on the 1981 album Plain and Simple.

This is Eric Bogle’s best-known song. It’s been covered by groups as diverse as the Dubliners, Joan Baez, the Skids and the Pogues. It’s even been done in different languages. In interviews, Eric Bogle said that he chose to center on the Battle of Gallipoli from World War I, rather than the then-current Vietnam War, since that’s the battle best known to Australians. He wrote it in 1971, just three years after moving to Australia. He attended an Anzac Day parade in Canberra. World War I was far more real to the Australians he met than Vietnam. The original song was over twelve minutes long, but Eric Bogle had the good sense to edit it. He entered a Brisbane songwriting contest with it and won the grand prize – an Ovation guitar. The first version came out in 1975 by John Currie. Eric Bogle’s versions can be found on a few albums, starting with Now I’m Easy.

This is one of those songs that’s so popular, it gets different titles. Eric Bogle’s title is “No Man’s Land”, but it’s also known as “Willie McBride” and “The Green Fields of France,” which was the title the Fureys gave it when they covered it. In a 2016 interview with the BBC, Eric Bogle said that the song was thought to be a traditional World War I-era ballad, and not a folk song written in the 1970s. The song was inspired by a trip Eric Bogle and his wife made to France, where he visited some military cemeteries. When he saw photos of the soldiers, he was amazed at how young they were. Although a ballad for a World War I soldier, it could easily apply to any conflict. Eric Bogle’s version appears on 1982’s Scraps of Paper.

If anyone could make misery into an art form, it’s Eric Bogle. This is a song with very bittersweet lyrics, but with a deceptively beautiful melody. This song also features one of Eric Bogle’s best vocal performances, filled with longing but not over-the-top. He also reveals a little of himself in the song by adding, “Writing my tired old rhymes, trying to turn back time.” People of all nations and all generations can identify with the chorus, “If wishes were fishes, we’d all cast nets in the sea.” This is yet another song that can be found on Scraps of Paper.