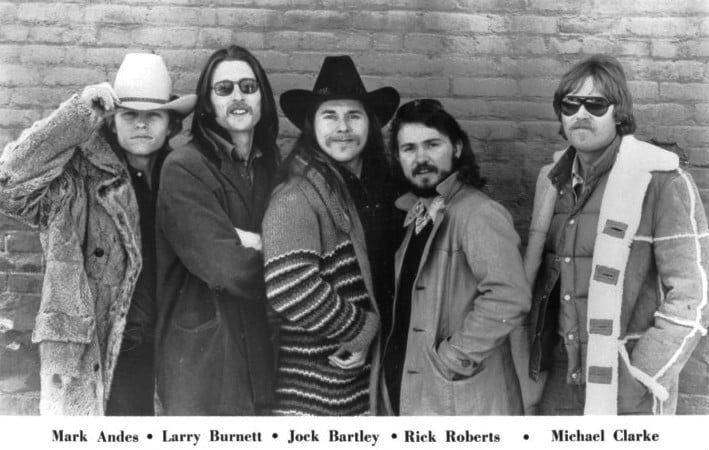 Our Top 10 Firefall Songs list takes a look at a band that crossed the genres of pop, soft rock and southern rock in a manner that proved commercially successful. Sounding somewhere between America, Poco, and at times Crosby Stills & Nash, Firefall was defined by a penchant for writing memorable pop songs performed by a group of excellent musicians. The band’s original lineup consisted of Rick Roberts on vocals and guitars, Jock Bartley on lead guitars, Larry Burnett on rhythm guitars and vocals, Mark Andes on bass and Michael Clarke on drums. That lineup lasted for the band’s first five albums. Their first album was released in 1976 entitled Firefall. The band followed up their debut album one year later in 1977 with a record called Luna Sea. The following year in 1978, Firefall released what we believe was their greatest album of their career entitled Elan. Most of the band’s hits were released from those first three albums. However the same lineup produced two more records both in 1980, entitled Clouds Across the Sun and Undertow.

After the release of the Undertow album in 1980, Michael Clarke and Mark Andes both left the band. It wasn’t long before Rick Roberts also left the band. The defections from the band’s original lineup would fuel a revolving door of musicians in Firefall for the rest of the band’s career. The group released six more albums over the next twenty years with many different lineups. The band never had another big hit. There were tours and reunions, but the glory years of Firefall ended basically in 1980.

Our Top 10 Firefall songs list centers mostly on the band first five albums with most of the attention paid to the first three. The band first three albums were loaded with great songs. We highly recommend picking up the first three instead of the greatest hits which still though is a pretty nice package. Firefall was a great band that was too harshly criticized at times for their sweet sounding pop hits. In the end, these guys wrote great songs produced with beautiful vocal harmonies, great musicianship, and perfect productions. Just take a listen……….

We open up our top 10 Firefall songs with this very interesting track “Sweet And Sour.” This great song was released on the Elan album. It was the second track on the album. It just seemed to fit perfectly following the album’s lead off track “Strange Way.” We wouldn’t be surprised if some people who heard this song for the first time might think it was Crosby Stills Nash & Young. It sounds just like them. The song was written by Jock Bartley and Rick Roberts.

Continuing with our top 10 Firefall songs list we turn to the band’s fifth album entitled Undertow.  The song “Love That Got Away,” was released as the album’s first single. It wound up being the lowest charting single the band had released in the past four years. However it did find success as a top 10 hit on the Billboard Adult Contemporary charts in 1980 peaking at the number nine position. The Undertow album was the last great Firefall album to feature the band’s original lineup of musicians.

Firefall’s killer song “Mexico,” was released on the band’s debut album Firefall. The album was released in 1976. The song was written by Rick Roberts. The song was never released as a single but it did receive substantial airplay on FM album oriented rock.

In the seventh spot on our top 10 Firefall songs list is the title track from the album Clouds Across the Sun. This great song sounds like it could have been released on Elan. The song’s great minor chord changes and melody defines a great song that should have been a hit. What is even more special is the guitar work on the song. The guitar solos stands as some of of the best ever put down on tape by Firefall.

Firefall shows off some of its southern roots in this great song “Cinderella.” This superb song was written by Firefall’s fantastic guitar player Larry Burnett. The song was issued on the band’s first album entitled Firefall. The record was released in 1976. The song “Cinderella,” was released as the third single from the album. The song did well breaking the Billboard Top 40 in 1977.

As we move into the second half of our top 10 Firefall songs list, we take a look at the band’s biggest hits. While there are so many great deep album cuts on the first five albums, we just can’t ignore the hits if we are doing a top 10 list. Starting off this section is Firefall’s big hit “You Are The Woman.” The song was released on Firefall’s first album entitled Firefall. It was the album’s second single release. However, it was the biggest hit from the record as it reached the top 10 of Billboard’s Hot 100 Singles chart making it Firefall’s only top 10 hit.

Livin’ Ain’t Livin’ was Firefall’s first single release. It was issued on their first album entitled Firefall back in 1976. Firefall’s music was split on many their albums. There were the sweet county folk pop songs written in major keys that seemed to celebrated love and happiness. Then there was the dark sides that used minor chords and focused on lost love and heartbreak while also tilting  a little more towards the jazzier side of things.

While this one may not be as sweet as “Just Remember I Love You,” it does stand as our favorite Firefall song of all time. Its dark, a bit heavy, incredibly melodic, passionate and simply just a great song. Strange Way was released on the Elan album in 1978. The song was written by Rick Roberts. The song was a success for the band as it just missed the Billboard Hot 100 peaking at number eleven.