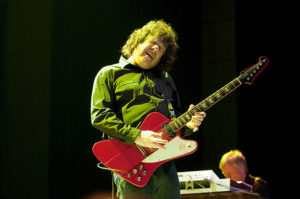 Our Top 10 Gary Moore Songs list presents the work of one of the greatest rock and roll guitarists to ever grace the concert stage. All too often Gary Moore is ignored on the list of the top 10 guitarists. That’s a shame because if you know this man’s music, you will understand that he stands as one of the most ferocious, brilliant guitarist to have ever lived. The man had magnificent techniques like an Eric Clapton but he also played with the soul and spirit of a Stevie Ray Vaughan.

Before embarking on a solo career in the late 1970s, Gary Moore played with several bands, perfecting his skills with time. Thanks to his father’s influence, Gary Moore ventured into music at an early age. It would all start with his father inviting him onstage to sing with a showband at a gig he had organized when he was six. Almost four years later, his father would purchase him a guitar which he forged quite a deep relationship. Gary Moore would later move to Dublin, where he joined the Irish band, Skid Row. However, Gary Moore would later leave the band to begin his solo career.

In 1974, Gary Moore would join the legendary rock band Thin Lizzy as a replacement for Brian Robertson who had injured his hand. Robertson eventually returned but quit the band a few years later and again was replaced by Gary Moore. Nonetheless, Thin Lizzy’s partying was too heavy for Gary Moore’s who declined to become a permanent member and eventually left the band again. Moving to London, Gary Moore signed with Virgin Records, where he released an album, Corridors of Power. Despite not being so successful, the album made an appearance on the Billboard  Top 200 album charts. The album featured Whitesnake bassist Neil Murray and Deep Purple drummer Ian Paice.

One of Gary Moore’s most distinguished works was his legendary album entitled  Still Got the Blues. Many classic rock guitarists point to this album as one of the most inspirational albums of the classic rock era for rock and roll guitar players. The album was released in 1990 as an album that would stand in stark contrast to the grunge scene that was just unfolding.

Our Top 10 Gary Moore songs list celebrates the musicianship of one of rock’s greatest guitarists. Gary Moore was a guitar player so respected that even the renowned guitar companies Gibson and Fender would  honor him with signature model guitars. If you’re unfamiliar with Gary Moore’s songs, this list should turn you on to one of the greatest guitarists of all time.

We open up our top 10 Gary Moore songs list with the raging song “Cold Day in Hell.” The song was featured on Gary Moore’s 1990 album  After Hours. The track’s explosive opening hits the listener straight in their rock and roll blues hearts with a blaring horn section and a screeching guitar solo by the magnificent Gary Moore. B.B King is an obvious influence on Gary Moore’s playing. The blues legend even makes an appearance on the After Hours album. The album also features an appearance by the great blues guitarist Albert Collins. If your a fan of blues guitar, this album should be right at the top of your collection.

Back to the Blues marked Gary Moore’s return to his electric blues vibes with which he found fame and success in the music industry. “The Prophet” is one of the best Gary Moore songs that take us back to his awe-inspiring thirteenth solo studio album. When you listen to this song, you will understand why Gibson and Fender went all the way to honor Gary Moore with signature guitar models. It’s the scorching guitar riffs that evoke quite an emotional feel and vibe within this song.

Featured on his 1987 album Wild Frontier, “Over the Hills and Far Away” is one of Gary’s best songs ever released. The song is about a guy who got framed for a murder he didn’t commit. In prison, this guy kept dreaming of the day he would get out and return to his woman who was waiting for his return. The song was also covered by Domain back in 2004 on their tribute album Give Us Moore.

This incredible Gary Moore song “Oh Pretty Woman,” has nothing to do with the original Roy Orbison classic. This is an entirely different song. Just like Gary Moore’s “Over The Hills and Far Away,” was a completely different song from the Led Zeppelin classic. Listen to Gary Moore’s guitar solos in this rip roaring rocker. This great blues song was written by A. C. Williams. Gary Moore released it on his 1990 album Still Got the Blues. The song also featured an appearance by the legendary Albert King on guitar.

Number six on our top 10 Gary Moore songs is the ballad “Empty Rooms” from his 1983 album Victims of the Future. Everyone who has ever had a broken romance will identify with the song. The song is a slow blues song tune that delivers a great Gary Moore guitar solo at about the three minute mark. The song closed out side two of the album. It was also released as the third single from the record.

Featured on his compilation album Ballads & Blues 1982-1994, “One Day” is an outtake from the supergroup BBM’s album Around the Next Dream. The supergroup featured Gary Moore, Jack Bruce and Ginger Baker. It was kind of like a version of Cream for the 1990s with Gary Moore replacing Eric Clapton. This is one of those super groups that many rock fans may have missed or are unfamiliar with. The band only released one album in 1993, The grunge scene was so dominating rock at the time, this group sort of got overlooked.

In the number four spot on our top 10 Gary Moore songs list we present the stunning track entitled “The Loner.” This monumental track was released on the album Wild Frontier. The album was released in 1987. The sound of the guitar and Gary Moore’s playing seemed to serve as an inspiration for a guitarist like Joe Satriani who had not yet released his first album. This is just a phenomenal recording. When people talk about guitarists that could make their guitar cry, this is what they are talking about.

At number three on our top 10 Gary Moore songs list is “Out in The Fields” from his 1985 album Run for Cover. “Out in The Fields” is one of the commercial rock ballads credited to two of the greatest Ireland music icons Gary Moore and Phil Lynott. The great Phil Lynott of Thin Lizzy sang lead vocals on the tune along with Gary Moore. This anti-war song went on to chart at number five on the UK Singles Charts. This is just smoking stuff.

In the number two spot of our Gary Moore songs list is his breathtaking song entitled “Parisienne Walkways.” This one always reminded us of Santana’s “Europa,” in the guitar soloing that Gary Moore lays out. His playing is so emotional on this recording. There are many versions of this incredible piece of music. We always felt the ultimate version was captured on the Blues Alive album released in 1983. The original version was issued on his studio album Back on the Streets released in 1978. The guitar note Gary Moore hits at about the two minute and twenty five second mark and holds for close to a minute may be the greatest note ever played in rock and roll.