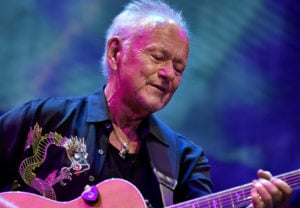 Our Top 10 Jesse Colin Young Songs introduce us to an American songwriter and musician who has left a unique mark in multiple music genres, including rock, country, folk, and jazz. Born in New York, Jesse Colin Young had his music career inspired by his parent. Jesse Colin Young had his parent passionate about classical music, encouraging him to play by gifting him a piano. His singing qualities have been majorly enthused by his mother, a violinist and a singer with perfect pitch. Jesse would later win a scholarship to study classical guitar at a young age only to broaden his musical taste when he was older, living behind a record store. He would later become a full-time musician releasing his debut album, The Soul of a City Boy, in 1964. Meeting guitarist Jerry Corbitt would have Jesse Colin Young think of forming a band.

The two united to form the Youngbloods, a name inspired by Jesse’s second solo studio album Young Blood. However, Jesse Colin Young would in 1970 build a recording studio next to his home where he recorded his solo album Together two years later. With the album receiving critical acclaim, he left the Youngbloods to embark fully on his solo career. His music career has taken much influence from country blues artist Lightnin’ Hopkins and folk singer Pete Seeger among others. Jesse Colin Young would take a break from releasing and performing music in 2012 after he was diagnosed with Lyme disease. However, his son’s graduation recital by Berklee College of Music musicians inspired him to start performing again in 2016. Jesse would record a new solo record with a band from the school, having it released in 2019. Here are the top 10 Jesse Colin Young songs from a string of hi solo albums.

Ushering us to the top 10 Jesse Colin Young songs is the ballad “Before You Come” from his album Songbird. In a Facebook post, Jesse revealed that the song was given to him in a dream after he walked through the Black Hills of South Dakota. The walk was after the siege of Wounded Knee in 1973, having him release the song in 1975. He went on to say that the song was like a gift from Spirit to help him comprehend the struggle that First Nation’s People went through. “Before You Come” was offered in support of those who gathered at Standing Rock to protest for the protection of future generations.

“Get Together” is a classic peace anthem that brings the best of Jesse Colin Young’s vocals. Initially, the song served as the Youngbloods’ signature song, only to have Jesse tag it in his 1993 album Makin’ It Real. Jesse teamed up with Steve Miller to release a new version of “Get Together” to celebrate the 50th anniversary of the Youngbloods version, which hit number one on the Billboards back in the years. The song was also released in collaboration with WhyHunger for their SongAid campaign.

Featured on the album Light Shine “Grey Day” is yet another awe-inspiring from Jesse’s primes. The song is one of the best folk-rock songs ever performed by Jesse Colin Young. “Grey Day” is loved by many thanks to its uplifting lyrical content having it regarded to be among the sublime and exceptional compositions by Jesse.

Light Shine proved to be among the most sublime albums by Jesse Colin Young, thanks to songs featured on it. You know it’s about time to let it shine when you hear the album’s song “Light Shine.” We all have some light within our souls, and Jesse found this as the perfect song to call on everyone to bring out the best they have within themselves. His vocals are so powerful that they evoke some emotions of passion and togetherness, making this one of the best songs from this album.

Number six in our top 10 Jesse Colin Young songs is “Rye Whiskey” from his album The Soul of a City Boy. Let’s talk booze; let’s show our love for some alcohol! But in specific, let’s talk about the emotions that rye whiskey brings to its lovers. It’s not the best of the feelings when Jesse fails to get some rye whiskey. One question for you; what’s your rye whiskey in life? Probably, that is a deeper way not to judge Jesse Colin Young in his cravings and remind ourselves that we are all addicted to something!

While many artists are out there praising the beauty and sexiness of women attesting to how they need a chance with them, Jesse Colin Young decided to do it differently. “Sunlight” is a perfect way to appreciate the nurturing nature of women in love. In itself, the song carries a deep and affectionate message about our women who are worthy of some love. You’re not alone-she cares!

Jesse Colin Young’s music career had quite a number of songs from his solo career borrowed from songs he wrote for the Youngbloods. A perfect example is “Darkness, Darkness,” which was initially featured in his former band’s 1969 album Elephant Mountain. The song finds a balance between folk-rock and psychedelic rock, spicing Jesse’s album Sweetwater with the glamour of his early composition skills. “Darkness, Darkness” remains to be one of the most covered songs by Jesse Colin Young.

“Song for Juli” is a hit from Jesse Colin Young’s sophomore solo album after the Youngbloods disbanded. He penned the lyrics to the song about his daughter Julia after the birth of Cheyenne, his son. The song was inspired by how Julia felt robbed of attention now that the family had a newborn. “Song for Juli” was written for her to make her feel special, proving how much of a great dad Jesse might have been.

Featured on this list is one of Jesse Colin Young’s most recent songs, “Lyme Life,” from his 2015 album Dreamers. Jesse wrote this song about his fight with Lyme disease inspired by other people who struggled with the disease. His son’s graduation from music school also had quite some stakes in having Jesse Colin Young get back to the studio and record the song.

Number one on our top 10 Jesse Colin Young songs list is “Ridgetop,” which is by far the highlight of his solo music career. Featured on his 1973 album Song for Juli, “Ridgetop” is about a home in California that Jesse termed as ‘Ridgetop.’ He had bought the home after moving into the area with the Youngbloods back in 1967. Sadly, ‘Ridgetop’ was razed down by wildfires back in 1995, taking away his safe haven.