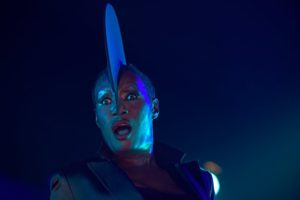 Our Top 10 Grace Jones Songs introduces us to a rare gem in the music industry whose appearance on stage was correspondingly contentious as the auditory flexibility of her music. And if you thought Grace Jones was just a musician, you are wrong! Grace Jones has earned her respect as an iconic songwriter, record producer, model, and actress, becoming an influential figure in the entertainment industry. As a model-musician, Grace Jones influenced the cross-dressing movement of the 80s, inspiring major artists such as Lorde, Lady Gaga, Solange, Annie Lennox, and Rihanna, to name but a few.

The Jamaican-American’s life changed when their family moved to New York when she was a teenager. Without a struggle, the 5′ 10″ lady beat all odds to become among the few black models to appear on covers of Vogue and Elle, working for major fashion houses Kenzo and Yves St. Laurent. In 1977, Grace Jones decided to surprise the world with her amazing musical talent, where she, without a struggle, signed with Island Records, becoming a New York star imminently. Thanks to her interaction with tons of music genres over the years that Grace Jones’ new wave drew on post-punk, funk, pop, and reggae music. Grace Jones release tons of albums that featured smashing hits that helped strengthen her foundation in the entertainment industry as an undisputed icon. Her music style has inspired tons, including Beyonce, Lady Gaga, and Madonna, who seem to have taken quite a junk of pages from Grace Jones’ playbook. Grace Jones must have made a larger cabinet for her endless awards in music which include career achievement awards. Without further ado, let’s have a look at our top 10 Grace Jones songs list that helped create one of the most awe-inspiring icons in music history.

Opening our top 10 Grace Jones songs list is the hit “Nipple to the Bottle” from her sixth studio album, Living My Life. Thanks to Sly Dunbar, with whom Grace Jones penned the lyrics to the song. “Nipple to the Bottle” brings back the true funk vibe from the 80s, delivered in splendid vocals by Grace Jones. You ought to love the song’s spectacular bass that gives the song’s instrumental a catchy rhythm. And true to the lyrics, Grace Jones doesn’t need to give in or feel guilty about her magnificent musical talent, which sends other artists back for music lessons. Success for this song was guaranteed, having it reach the top 20 on the Billboard R&B and Dance charts

When almost everyone else thought that was past her prime owing to the new blood in the music industry, Grace Jones dropped her 2008 album Hurricane, which took the world by surprise! Featured on this album, “Williams’ Blood” is an autobiographical ballad inspired by Grace Jones’ family in a touching rumination. Here, Grace Jones talks about how she took after Williams, her beloved mother, rather than her strict dad, Reverend Robert Jones. No better way would Grace Jones express how tough days it was growing up with her dad, but thanks to her mother’s musical genes, she found redemption, not by the gospel preached by her dad.

Featured on her album Warm Leatherette, “Private Life” is a hit song that brings the best of Grace Jones’ 80s music. The song is about dismissing another person’s life drama with an offhand mock. Initially, the song was penned down by Chrissie Hynde of The Pretenders for the band’s eponymous album. Upon listening to Grace Jones’ version, Chrissie Hynde admitted that it was a masterpiece, and this was how the song was supposed to be performed!

When you take on music performed by other musicians, you’d better top their performance to be on the safe side of the unforgiving critics. However, Grace Jones didn’t have to struggle with topping Australian band Flash and the Pan’s ballad “Walking in the Rain” when she did the cover to the song. The song was such a fine release that it was featured in Grace Jones’ music documentary A One Man Show.

“My Jamaican Guy” was not only one of the best Grace Jones songs ever but a revelation of why Grace Jones had tough days with her father. Featured on her album Living My Life, the Caribbean music-inspired reggae-sounding song was penned about Tyrone Downie of Bob Marley and The Wailers. This was in reference to his handsomeness though he was with somebody else when she wrote the song. A supportive parent is all you could ever dream of in your career, and Williams, Grace’s mom, was so great that she provided backing vocals to this hit song. However, she wouldn’t get credit for this since she upset the church elders as a pastor’s wife.

The world had not forgotten the song “Love is the Drug” from Roxy Music when Grace Jones decided to cover their song. She would make a few changes to the lyrics to have the song suit her musical style, which made it a special release. The song features art on another level, as depicted in the video, while still impressing through the artist’s deep funk vibes and awesome vocals.

Featured on her album Portfolio, “La Vie En Rose” is the signature song of Edith Piaf. Grace changed not a bit about the song while she tried top Edith Piaf’s version. While this might have been a long shot to make, Grace was impressed yet again on a cover, making the song sound like an original release. Edith Piaf’s version was so great that it received a Grammy Hall of Fame Award in 1998.

Number three in our list of the top 10 Grace Jones songs is “Slave to the Rhythm” from her 1985 album under the same title. The song was written by producer Trevor Horn, Bruce Woolley, Simon Darlow, and Stephen Lipson. “Slave to the Rhythm” was initially projected for Frankie Goes to Hollywood but ended up being done by Grace. The song is about the music industry and how it exploits artists.

Number one in our top 10 Grace Jones songs is “I’ve Seen the Face Before,” a reworking of “Libertango” by Astor Piazzolla. Both Jones and Barry Reynolds wrote the new lyrics to the song. “I’ve Seen the Face Before” is a description of the darker side of Parisian nightlife. Notably, the song was featured in key instants in the film Frantic. The song remains a highlight of Grace’s musical career and nightclubbing life.