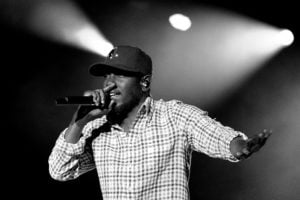 Kendrick Lamar is a young rapper from Compton, California. He made himself known by dropping a classic album called Section 80 back in 2011. Now he’s one of the biggest rappers out thanks to his work on Good Kid, M.A.A.D City  and To Pimp A Butterfly which just won a Grammy Award for Best Rap Album of 2015 against all odds. Because Kendrick’s been so prolific over the past four years, many people have a hard time recognizing a top 10 best songs list from him, but I’m going to give it my best shot here.

I like to say that Kendrick doesn’t make songs. He tells stories with his music. This is an example of the storytelling that I was talking about. It’s a song that has received critical acclaim and even political praise because of its inspiring message about staying positive in the face of adversity. The beat switches up multiple times throughout the track, which keeps you on your toes along with Kendrick’s infectious flow.

The song starts with a laid-back, reflective mood. This is where Kendrick uses the childhood story from his famous project to introduce us to the concept behind this track: feeling like an outsider and how to deal with peer pressure. He clarifies that he’s not telling everyone to do drugs but rather showing you what happens when you don’t say no; we get a pretty good picture since we see these kids doing drugs while driving and then getting into an accident due to intoxication. This song is about making your own decisions in life and hiding the fact that you’re “sober” (mentally) by acting like other people who are leading lives without rules or consequences. However, there should always be consequences for everything you do.

This is another example of Kendrick’s storytelling abilities. It tells the story of a depressed kid with a dream to be something big and how he can’t do it by himself. The instrumental, produced by Rahki, is beautiful, and the background vocals from Bilal, Anna Wise & Thundercat are beautifully haunting. Kendrick raps over this beat flawlessly and brings life to the song.

Another track from Compton’s own uses his influence for good rather than evil this time around. In this song, he meets a homeless man who turns out to be God himself. Kendrick spends the rest of the song questioning his own beliefs and figuring out what he should have done in that situation. The production of this song is also incredible, as usual.

This was one of my favorite songs off of TPAB when it was first released, but over time this has become an all-time classic for me personally. It’s a great song to play during any season because it never fails to make you feel good. You can’t help but bounce around to this track even if you are feeling down! It speaks on continuing the fight even though things seem dim now and staying hopeful for tomorrow—beautiful message well-delivered, Kendrick.

This song caused me so much anxiety when I first heard it back in high school because the lyrics warn about what drinking can do to you if you let it get out of hand. That said, this is still one of my favorite party/drinking songs to play when I’m hanging with friends at someone’s house getting ready for a night on the town! The beat used for this track was initially made by Tyler the Creator, and although Kendrick didn’t end up using it for “Bastard,” he figured he would save it for another opportunity like this one. It also features Jay Rock, who I love, and the two of them blend their flows flawlessly.

Another track features Jay Rock! He provides excellent backup vocals on this song as Kendrick talks about two different situations from his past. He makes a poor decision to get money for his family’s immediate needs rather than thinking long-term about what is best for them. The production of this song is fantastic as well, with a bouncy beat provided by THC & Sounwave, which fits perfectly with the theme of the lyrics and functions as an excellent backdrop for Kendrick’s flow, especially during the first verse when he spits 16 straight bars without stopping. This is one of my all-time favorite Kendrick songs.

I don’t think I’ve ever listened to this song without shedding a tear, but it’s okay because you should cry about the world’s injustices sometimes. This is one of my favorite songs on TPAB because of how personal it feels and how much anger pours out through his lyrics. It deals with how African-Americans are treated in today’s society and makes people like myself start thinking about race relations within our country for the first time in their lives. One of Kendrick’s best songs lyrically that will go down in history as one of the essential hip hop tracks of all time.

This song is from Kendrick’s most personal album, in my opinion, and it takes a look at two different scenarios from his past where he wasn’t there for his friends when they needed him the most. In each situation, Kendrick raps from both sides of the story to show empathy for both parties involved and how their choices significantly affect others around them beyond just themselves. The hook on this track is also compelling, with a significant contribution from Anna Wise. She supports Kendrick throughout the second verse and fantastic backing vocals that perfectly express what Kendrick is trying to convey.

If you don’t get hyped when this song comes on, I’m not sure we can be friends. I still remember the first time I heard it because every single second of that song is fantastic, even the seemingly useless intro that leads into the beat drop, which then leads into that “sucker-punch” of a verse. The lyrics are incredibly clever, and it has an unforgettable hook belted out by Bilal, who kills it with his screaming vocals! Also, who could forget about the cheeky reference to “Smooth Criminal” at 2:23? Overall there’s not much negative to say about this track except perhaps for the skits throughout, but even those aren’t enough to make me dislike this song.