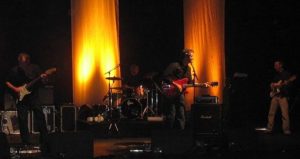 Take notice, Sheena Easton. You have competition as Scotland’s greatest rock music contribution to the world’s stage. A great argument can be made for the ‘Modern Girl’ singer. But, this top 10 focuses on another Glasgow-centric musical influence, Lloyd Cole and the Commotions, and their inventory of sound.

Forming in 1982 in Glasgow, the jocks came on strong from humble beginnings. With Bob Dylan’s music on their minds, they released their first studio album in 1984, Rattlesnakes. Ric Ocasek of The Cars helped mix some of the songs from this first album. They wrote the songs at Glasgow Golf Club, where Cole’s father worked. There were two decent-sized hits from the album, ‘Perfect Skin’ and ‘Forest Fire.’ Bob Dylan’s ‘Subterranean Homesick Blues’ was the catalyst for Perfect Skin, Cole said.

Cole is the chief composer, lyricist and vocalist of the band. He used a lot of comedy and tragedy mixed with romance as his chief inspirations for many of the songs he wrote for the band. Albeit, it was a brief career for the band, with only three albums released, but the melodies and harmonies they brought to the studio were distinctive. The band was mostly upbeat with their use of guitars, keyboards, drums and some string/brass arrangements. I always liked the smooth sound of the band, like jazz without a lot of strong brass presence.

The second album, Easy Pieces from 1985, became the band’s best-selling album, but it wasn’t as well connected with the critics as Rattlesnakes. Still, there were some hits.

Mainstream was the last studio album the band did together in 1987. Stewart Copeland from The Police was part of the process for one of the songs. The album stayed true to the strengths of the band and their particular sound. The press liked it better, and it also provided some hits.

Cole would often find references from contemporary popular culture, like…”read Norman Mailer or get a new tailor” to infuse into the lyrics. And, he has been quoted as saying films are influences for him as a songwriter. He mentioned ‘Bright Lights, Big City’, ‘My Beautiful Laundrette’, and ‘Five Easy Pieces’ as some that have inspired songs for the band.

After the breakup, Cole embarked on a solo career. He scored well in his solo career, but never became a superstar. Interestingly, he stayed in good shape with his old bandmates, using them on occasion as sources of collaboration during his solo journey. I don’t think his solo songs compare as well to those years when Lloyd Cole and the Commotions hit their stride and high marks with their three albums from the 1980’s.

From the middle album Easy Pieces, ‘Brand New Friend’, blends backing vocals from The Commotions with Lloyd Cole’s silky smooth voice. This song invites us all to seek out new friends with lots of synth and a constant drum beat. Lots going on in this song, and yet it all comes together as a great pick me up melody. It’s a great, direct way to introduce the band’s sound.

The first album, Rattlesnakes, had this same titled song. It is a sleeper on the album. The hook comes as Cole pronounces “love is all you need.” Sound familiar? Rattlesnakes are a metaphor for all the guys coming around in a beautiful girl’s life. She needs a gun to protect herself, he says, from all the rattlesnakes.

From the third album, Mainstream, ‘My Bag’ is an upbeat melody from the start telling a story of how one’s life is with all their baggage, and then Cole asks ‘what’s your bag?’ They mix the synths with their voices, and then Cole raps on. The guitar picks on through to the end. Apparently, it was a big dance song in its time in Brazil according to some comments on Youtube.

The last album entitled Mainstream also produced this gem, ‘From the Hip.’ Relaxing from the beginning, and then the song creeps up with its rhythm to impose itself as a declaration of growing up with all the psychology of life constantly around. The band had its way of driving their guitars to make their point alongside the lyrics.

The second album, Easy Pieces, was the band finding its form, experimenting some, and not giving up their principles of mixing their sound with story form lyrics. ‘Perfect Blue’ gives us some of the same, but always catchy with their chord changes, and finding a way to be different. Lloyd Cole and The Commotions prove again and again their brand of rock belongs in the history books.

Again, the second album doesn’t disappoint. ‘Cut Me Down’ brings us right along as a song we should probably be listening to with the windows down in our cars. Cole mentions he is “achin all Summer” and “wasted all my Summer.” We realize what it might be like in Scotland cruising along the countryside looking at all the green grass and ocean side views.

Their first hit and our introduction to who Lloyd Cole and The Commotions are was ‘Perfect Skin.’ It’s all about a girl, of course. Right away, we know this is a band who knows who they want to be with their sound, and the lyrics are otherworldly poetry…”She’s got cheekbones like geometry and eyes like sin.”

Easy Pieces comes through again with its very best song, ‘Lost Weekend.’ With an infectious sound, the unforgettable lyric that gets the song off to such a good start is “It took a lost weekend in a hotel in Amsterdam.” If you’ve ever been to Amsterdam, you can probably relate. A lot of people can’t remember much of their days there sometimes.

Rattlesnakes, the debut album, proved itself with a variety of offerings by the band. ‘Forest Fire’ is the longest song in this top 10 topping out over five minutes long. It is well worth the whole listen. In some respects, this is the band showing all of their skills sonically. What is so great is how the mood of the song stays ambient like a forest fire throughout so that the music itself with the lyrics create the metaphor for love.

From the debut album, ‘Are You Ready To Be Heartbroken?’ is a classic. It is a song that can only be summed up as perfect. Analyzing the lyrics could belong in a college lit class. You just have to listen. But, I guarantee you will not be able to only listen to it one time in succession. You will press the replay button. This is why we love music.