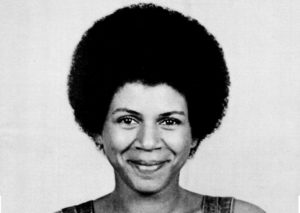 From 1962 until 1979, American singer-songwriter Minnie Riperton entertained the fans with her versatile music career that catered to the genres of disco, jazz, R&B, and soul. Originally, Riperton hailed out of Chicago, Michigan as the youngest of eight children within a family that was heavily involved in music. When her parents recognized her vocal talent even at a young age, she was encouraged to pursue a career in music. Riperton’s schooling includes her attendance at Chicago’s Lincoln Center for the Performing Arts.

While with the Rotary Connection, a Chicago-founded band best known for its experimentation of psychedelic-infused music, Riperton earned enough confidence and experience as a vocalist where she would carve a name for herself as a solo artist. While with Rotary Connection, Minnie Riperton performed as the lead vocalist from 1966 until 1968, where she and the band often served as the backing band to Muddy Waters while he was on tour, promoting his 1968 album, “Electric Mud.”

Once Riperton went solo, she recorded and released her first studio album, “Come to My Garden,” which was first released in 1970 under the label of GRT Records. The album would be released again in 1974, this time under the Janus label, which occurred the same time as Riperton’s second album, “Perfect Angel.” When Riperton chose to embark on a singing career, the heavy music style she had while with Rotary Connection was dropped in favor of a jazzy orchestration of soft pop that seemed best suited to accompany Riperton’s operatic voice.

Not only did 1970 serve as Riperton’s breakthrough year as a solo artist, but it also marked the beginning of a 9-year marriage with music producer, Richard Rudolph, who also wrote many songs with her throughout her musical career until it was put on hold due to Riperton’s breast cancer diagnosis. On August 24, 1976, Riperton went public about her condition, admitting she had already undergone a mastectomy and was now contending with the spread of cancer as it reached into the lymphatic system. Prior to her death on July 12, 1979, Riperton had been a spokesperson for the American Cancer Society.

Before the tragic outcome of Minnie Riperton’s cancer that cut her life short, the singer-songwriter brought forth a total of six studio albums, each of them realizing chart succession the US Billboard 200. When cancer claimed the woman’s life in 1979, a number of artists recorded and released their own music as they paid tribute to Minnie Riperton-Rudolph. Stevie Wonder, who worked closely with Riperton and was her mentor, was the first to pay homage in September 1979. In Wonder’s 2005 single, “Positivity,” Riperton’s name was mentioned prominently. From 1981 until 2001, there were six compilation albums released, all in memory of Minnie Riperton-Rudolph.

While Minnie Riperton was still with Rotary Connection, she performed the cover song “Respect,” which was originally recorded and released by Otis Redding in 1965. While Riperton’s performance didn’t achieve the chart-topping success as Aretha Franklin’s 1967 rearranged version, the intent wasn’t to cover Franklin’s version, but Redding’s. This song is included in the compilation album, “Petals: The Minnie Riperton Collection,” which was released in 2001. The album pooled together most of Riperton’s work as a performer from the start of her recording career until its end.

The final album recorded by Minnie Riperton before her cancer would catch up to her in 1979, was “Minnie.” The song, “Dancin’ & Actin’ Crazy,” features her children, Marc and Maya, whom she had with her husband, Richard Rudolph, singing in the background. The voices of a mother and her children singing together before the crippling effect of cancer taking her life seemed to add a bit more fun to a song that was designed to be as upbeat as it sounded.

The third studio album, “Adventures in Paradise,” was recorded around the time frame where Minnie Riperton would first learn she has breast cancer. The single, “Simple Things,” was the second of three hit singles that would chart in 1975. On the US Billboard Adult Contemporary Chart, it peaked at number forty-five while on the US Billboard Hot R&B/Hip-Hop Songs Chart at number seventy.

Coming from the 1977 album, “Stay in Love,” the single, “Stick Together,” originally starts out as a song lasting six minutes and eighteen seconds. This third studio album recording by Minnie Riperton was her first attempt at performing disco music at a public level as a means to partake in a trend that heavily influenced American pop culture at the time. The single peaked at number twenty-three on the US Billboard Dance Club Songs, which would be the one and only time a song from Riperton would appear. It also charted at number fifty-seven on the US Billboard Hot R&B/Hip-Hop Songs Chart.

Minnie Riperton’s final studio album, “Minnie,” was a recording she was determined to compete before cancer would claim her life. “Light My Fire,” which was originally recorded and released by The Doors in 1967, sticks out as a song where Riperton was at her most lively self, despite the painful cancer condition she was enduring. It’s also noted Jose Feliciano’s voice doesn’t participate in the song until the ladder half as he was originally in the recording studio as Riperton was performing it and was inspired enough to pop in and join her.

The fifth and final studio album Minnie Riperton would personally record was released two months before cancer that spread throughout her body would claim her life in 1979. “Minnie” features the hit single, “Lover and Friend,” which peaked on the US Billboard Hot R&B/Hip-Hop Singles Chart at number twenty. The song is an emotional piece that served as an ode to the relationship Riperton shared with her husband, Richard Rudolph.

“Memory Lane” served as the leading track for Minnie Riperton’s final studio album, “Minnie,” which was released in 1979, two months prior to her death. A music video was shot on May 25, 1979, just over a month before Riperton died due to the complications cancer is known to impose upon its victims.

The sixth album coming from Minnie Riperton featured a duet with Peabo Bryson, “Here We Go.” On the US Billboard Hot R&B/Hip-Hop Songs chart, it peaked at number fourteen in 1980. This song, along with the rest of the album, was recorded by Riperton during her 1978 during vocal sessions, not long before cancer would claim her life and rob the world of one of the most influential vocalists of its time. This album was recorded and released in memory of Minnie Riperton where her vocal contribution towards its track lineup is featured throughout. A number of artists collaborated together to put forth what’s really more of a tribute album as their way to pay homage to a songstress they each felt close to in their own way.

Coming from the third album, “Adventures in Paradise,” the single, “Inside My Love,” peaked as high as twenty-six on the US Billboard Hot R&B/Hip-Hop Songs Chart in 1975. It also appeared on the US Billboard Hot 100 at number seventy-six. According to music critics, including BBC Music, Inside My Love served as a standout track as it illustrated ambiguously for its sensuality while at the same time the innocence of Riperton’s voice made it so appealing.

The breakout single for Minnie Riperton was “Lovin’ You,” which is the artist’s signature song. Coming from her second studio album, “Perfect Angel,” the US Billboard chart-topper served as Riperton’s official notice she had what it took to become a successful solo artist. On the UK Singles Chart, the song peaked at number two while in Canada and on the US Billboard Hot R&B/Hip-Hop Songs chart at number three. Riperton also realized chart success for Lovin’ You in Australia as its Kent Music Report charted the song at number five. In the number of copies sold, Lovin’ You also became certified Gold by the Recording Industry Association of America (RIAA) and was certified Silver with the British Phonographic Industry (BPI). The album was also certified, as Gold for having over 500,000 copies sold.