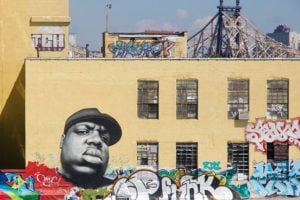 Notorious B.I.G was a renowned American rapper and songwriter considered one of the greatest rappers of all time. He was a major figure in the hardcore hip-hop culture widespread in the ’90s. Even though his real name is Christopher George Latore Wallace, he is known by other nicknames such as Biggie, Notorious B.I.G, or Biggie Smalls.

Christopher Wallace started rapping as a teenager as Biggie Smalls. During the time, he recorded one demo with DJ 50 Grand, which caught the attention of Big Daddy Kane’s DJ, Mister Cee. After Cee introduced his demo into the industry, Biggie Smalls was signed by Uptown Records.

Whe Puffy left Uptown Records, he left with Biggie to start his record label called Bad Boy Records. Biggie Smalls changed his name to “The Notorious B.I.G” in preparation for his debut album. In 1994, he released his debut single “Juicy” and later his album Ready to Die. Biggie was shot in 1997 after attending a party in L.A. His double album Life After Death was released two weeks after the incident and recorded platinum sales.

“I Got a Story,” to Tell was one of the songs from the album Life After Death. Unlike his other rap songs, this one takes the form of storytelling. B.I.G tells his experience with a woman involved with someone from Knicks. The fellow is playing against Utah Jazz that same night walks in at the wrong time and a robbery ensures. In the rest of the song Biggie explains to his friends his encounter. The song became popular due to the barbershop-conversation style popular at the time.

“Things Done Changed,” is the first song on the Ready to Die Album. The song was released in 1994 by the Bad Boy Record Label. Here, Biggie sings about the changes in the street games, including his own. He talks about the evolution of fashion and lifestyle from when he was a kid until he is a grown man. Additionally, he notes how the streets have become dangerous over the years. This song can be interpreted as how cocaine made American cities into war zones in the ’90s.

In 1997, Notorious B.I.G released Notorious Thugs, a gangsta rap song featuring Bone Thugs-N- Harmony, under the Bad Boy Record label. This was unlike the normal style laid back flow listeners were used to hearing. Even though the fast flow was new, Notorious B.I.G flowed effortlessly with Bone Thugs-n-Harmony.

7. I Love the Dough (featuring Jay-Z)

In this song released in 1997, Biggie and Jay-Z refute the common notion that money cannot buy happiness. They talk about the advantages of being rich as opposed to having little fortunes. Some of the perks they enjoy include classy women, expensive alcohol, and opulent jewelry. The song contains excellent quotes and sharp internal rhymes. The song also featured Angela Winbush on vocals.

This banger was released in 1994, one month after Tupac was shot which brought bad blood between the two artists. Even though B.I.G argues that the song had been recorded months before the incident, Tupac was convinced that B.I.G and Puff Daddy had set him up. In his verses, Biggies issues threats with a certain biblical intensity and his producer Nashiem Myrick brings out the song well. Tupac interpreted the song as a message from Biggie and now considered him an enemy. Later, Tupac released a diss track focusing of Biggie, and Puff Daddy.

“Big Poppa,” was the second single in Notorious B.I.G’s album dubbed Ready to Die, and it was based on one of his nicknames. In this song, Puff Daddy’s efforts to smooth out Biggie’s grit are evident. Unlike his other hardcore songs, this one takes a smooth West Coast style that was loved by many. It was released in 1994 and recorded immense success by selling over 1 million copies. The impressive performance made the single to become certified platinum licensed by the R.I.A.A. In 1996, “Big Poppa,” was one of the songs nominated for Best Rap Solo in the year’s Grammy Awards. Additionally, the song won the Billboard Music Awards.

As Ready to Die was in the final stages of the recording sessions, Biggie convinced DJ Premier to put together this beat for $5,000. Even though DJ Premier knew it costs more than that to make a beat, he agreed to make one for Biggie because he liked his talent. Notorious B.I.G wanted to integrate street realness through the song, and he did that pretty well.

Notorious B.I.G’s album Life After Death mostly focuses on the consequences of excess. The song “Mo Money Mo Problems” featuring Mase and Puff Daddy was released in 1997 and is based on the problems with affluence. Additionally, it includes a part of the Diana Ross hit “I’m Coming Out” that makes it unique. In 2000, the song rose to be his first #1 pop hit. After selling over 10 million copies, Life After Death was awarded the diamond certificate by R.I.A.A.

Second on our list is Biggie’s “Hypnotize” which was released some few weeks before he died in March 1997. It was his first single from the album Life After Death. The song is filled with pop culture references, pick-up lines, and various boasts. Its beat is based on a sample from Herb Alpert’s “Rise.” “Hypnotize” exhibited immense success, becoming the second single to debut among the top on the Billboard’s Hot 100.

Juicy is undeniably the best song by Notorious B.I.G. that established him as a titan in the music industry. Also, it is the first single from his 1994 debut album Ready to Die. The song became popular because it talks about the rise of a rapper from nothing to the top. Biggie got the song’s name from Mtume’s hit called “Juicy Fruit,” released in 1983. Even though Biggie used some concepts from Mtume’s hit song, he brought a new twist that shows his musical genius. The success of “Juicy” is attributed to its use of people’s biographies in a way that expresses the American Dream.