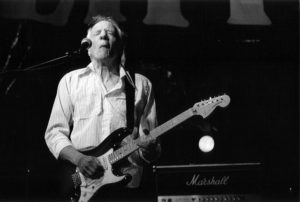 After finding fame with Procol Harum, Robin Trower broke free of the band in 1971 to launch a solo carer. After roping in singer/bassist James Dewar and drummer Reg Isidore (who soon got dumped for Bill Lordan) as his backing band, he released his solo album, Twice Removed from Yesterday, in 1973. No one noticed. Undeterred by the lack of success, he pushed forward with his sophomore output, Bridge of Sighs. And that’s when things changed. Although Trower’s style was very much his own, the album bore enough resemblance to Jimi’s Hendrix’s Electric Ladyland to send it soaring up the charts. Nearly 50 years on, Trower’s mid-70’s heyday may be far behind him, but his masterful blues-rock guitar playing is still drawing fans. Here’s our pick of the top 10 Robin Trower albums of all time.

Robin Trower’s guitar playing has only got better with age. It’s richer, bluesier, and more well-traveled than ever. Surprisingly enough, so are his vocals. In 2009, he assumed sole lead vocal duties for the first time ever on the sublime What Lies Beneath. Sounding like a cross between J.J. Cale and Mark Knopfler, his earthy, weathered drawl tackles standout tracks like the triumphantly funky “Skin and Bone” and the aggressively hooky “Freefall” with ease. Warm, emotional, and gorgeously mellow, it’s a deeply satisfying effort.

1977’s In City Dreams might not be able to compete with some of Robin Trower’s earlier masterpieces, but it’s still a supremely funky affair. Trower’s decision to prioritize accessibility over authenticity might not have won him any points with the critics, but there’s plenty to like here if you dig deep enough. The raucous blues of “Further On Up the Road” is a delight, as is the sweetly childlike “Bluebird.” “Sweet Wine of Love” is delicious, with a straightforward, hummable melody and a gorgeously uplifting guitar solo. Newcomer Rustee Allen’s punchy bassline adds a party vibe to the funky “Somebody’s Calling,” while James Dewar’s soulful vocals are as strong as ever throughout.

Victims Of The Fury is an underrated gem. Released in 1980 as the last LP to feature the combined majesty of the Trower/Dewar/Lordan lineup, it was a record out of time. There’s zero concession to the times, with no hint of disco and not even a whisper of new wave. And thank heavens for that. Trower skips from one great song to the next, defiantly ignoring whatever else was going on in the charts to create an album of raw, primal power. From the heavy rock of “Jack and Jill” to the breathtaking beauty of “Only Time,” there’s barely a misstep to be heard. It might be over 40 years old, but Victims Of The Fury is still compulsory listening for Robin Trower enthusiasts.

2004’s Living Out Of Time sees Trower team up once again with Dave Bronze on bass, Davey Pattison on vocals, and Pete Thompson on drums. It wasn’t quite the dream team (the absence of the late, great James Dewar will always be a sore point) but it’s as close as dammit. Robin Trower is in particularly fine form, with tracks like the soulful “Please Tell Me” and the languid “I Want to Take You With Me” proving as much a showcase for his songwriting talents as his guitar playing. It’s not perfect (Pattison is in fine form vocally, but his delivery occasionally lacks confidence), but it’s a supremely solid offering nonetheless.

Over 40 years after releasing his debut album, Trower proved he’s still as capable of delivering the goods as ever on 2016’s Where You Are Going To. After a relatively disappointing opener (the radio-friendly but ultimately unmemorable “When Will the Next Blow Fall”), the album blossoms into a laid-back, groovy affair peppered with an assortment of songs that recall Trower’s mid-70s heyday. Like a fine wine, Trower’s vocals have only improved with age. His guitar playing, meanwhile, is as wonderful as ever.

On Long Misty Days, Trower moves away from the raw, blues-rock-dominated sound of his earlier output and embraces a more upbeat, mainstream style. The result isn’t entirely successful, but when it works, as it does on songs like the insanely catchy “Same Rain Falls” and the hugely enjoyable rocker “Caledonia,” it’s sensational. It might not be quite as memorable as Bridge of Sighs or Twice Removed From Yesterday, but it’s still a confident, assured album. The title track, in particular, is delivered with enough grace and power to rival anything in Trower’s back catalog.

If For Earth Below has a problem, it’s that it tries a little too hard to replicate the winning formula of Bridge of Sighs. It doesn’t quite succeed, but it’s still a very solid effort. From hereon in, Trower would slowly begin to stray from the gritty, bluesy rock that dominated his early output to a smoother, more mainstream style. For now, however, blues rule the day, even if the overall sound is a little more velvety than usual. James Dewar and Bill Lordan provide able support, with the latter’s intricate drums rolls on “A Tale Untold” deserving a special mention. Trower’s detailed playing is spectacular, particularly on the mesmerizing opener “Shame the Devil” and the hypnotically intriguing “Gonna Be More Suspicious.” The understated but still heavenly titular track draws the album to a very satisfactory close.

Robin Trower Live should be mandatory listening for any artist or band intent on releasing a live album. Recorded at a stadium show in Sweden in 1975, it gives us Trower in his mid-70s prime. There’s no fat, no unnecessary frills, just one blistering song after another. Trower’s Stratocaster licks are as fine as ever, but credit also has to go to Bill Lordan’s powerhouse drumming and James Dewar’s soulful vocals. Songwise, there’s not a single dud to be found. All the classics are here, from “Little Bit of Sympathy” and “I Can’t Wait Much Longer” to “Too Rolling Stoned” and “Daydream.” Although Trower doesn’t stray too far from the studio versions, everything sounds a little bit funkier, a little bit denser, and a little bit more rocket-fuelled than before. The Robin Trower Band might not have done frills, but they did kick ass – here, they kick it harder than ever.

Following Jimi Hendrix’s death in 1970, people spent three long years wondering who his successor would be. And then along came Robin Trower with his debut album, Twice Removed From Yesterday. After that, there was no more wondering. That’s not to say that Trower was nothing more than a Hendrix facsimile. He wasn’t. Neither was he another Eric Clapton or Jeff Beck. He lacked the flamboyance, the unpredictability, and the earthiness of either one. But what he had was just as special. He bought a clarity and a solemnity to the blues that few (if any) of his peers could match. On tracks like “Daydream” and “I Can’t Wait Much Longer,” his creativity and melodicism are almost hypnotic. And then there’s the psychedelic rock of the titular track, a song that proves Trower’s strength as a songwriter as much as his talent as a guitarist. The whole thing is mesmerizing. While it would take his next album to fully realize his ambitions, Twice Removed From Yesterday was a delightful way to say hello. ,

The problem with being constantly compared to Jimi Hendrix is that you’re always going to come up short. Or at least, you are unless you’re Robin Trower, who, on the phenomenal Bridge of Sighs, takes the comparison and owns it. On an album of 13 tracks, there’s not a single misstep. Trower’s quicksilver guitar can take most of the credit for that, but James Dewar’s whiskey-soaked vocals deserve a round of applause in their own right. From the opening riff of “Day Of The Eagle” through to the breathtaking finale of “Little Bit of Sympathy,” the entire thing stands up as a timeless tour de force. If you only have space in your collection for one Robin Trower album, make it this.