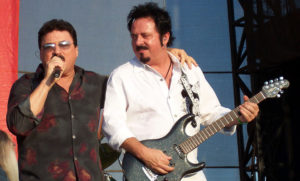 Our top 10 Toto albums list takes a listen to a band fueled by some of the greatest rock ‘n’ roll musicians of all time. Much was made when the band first hit the scene in 1978 that the group was composed of legendary studio musician who would just make soulless records. Nothing could be further from the truth as the band Toto has released album after album of records filled with songs full of groove and brilliant playing as well as songs that were highly addicting to listen too. Since their debut album in 1978, Toto has released fourteen studio albums. The band’s original members consisted of Bobby Kimball on lead vocals, Steve Lukather on guitars, lead and backing vocals, David Paich on keys, lead and backing vocals Steve Porcaro on keyboards and  vocals, David Hungate on bass and the late Jeff Porcaro on drums. Lead singer Bobby Kimball has been in and out of the band over the years as the group went through a handful of singers in between Kimball’s absences. Steve Lukather has been the one constant member as the sound of his guitar and playing became a trademark of the Toto sound.

We open up our top 10 Toto Albums list with the group’s twelfth studio album entitled    Falling in Between. From the albums very first opening notes, Toto fans heard a very different sounding band as Greg Phillinganes plays keys on the album. There is also some very heavy sounding guitar work through the album that is pretty intense. The group almost sounds like Dream Theater on the opening cut. Another standout track is the rocking “King Of The World.” This is a Toto album full of surprises that we highly recommend to check out. Falling in Between was released in 2006.

Continuing with our top 10 Toto Albums list we present the Toto album entitled Turn Back. The album was released in 1981. Turn Back was the band’s third album. The group took a marked change in direction on this one. It’s definitely the most basic hard rocking album the group ever released. There is a lot of open space in the mix which is kind of cool because the band never sounded this raw before. Unfortunately for the record company and I suppose the band too, the album didn’t do too well on the sales charts. But so what, it’s a great rock and roll record that has always been one of our favourite Toto albums. Listen to Steve Lukather’s solo on “Goodbye Elenore.” Jeff Porcaro also seems to be having a lot of fun on this album.

In the number eight spot on our top 10 Toto Albums list is Toto XIV. This was the bands fourteenth album. This was not an album with intentions for commercial pop radio succes. This one was all about the playing as the group tears it up on this record. This is one of the most fun Toto albums to listen to if you’re a fan of the group’s musicianship which most Toto fans are. Michael McDonald sings on three tracks. The young phenomenal bass player Tal Wilkenfeld is also featured on the album. You may not be familiar with this record, but we highly recommend it. The album was released in 2015.

In the number seven position on our top 10 Toto Albums list is the groups sixth album release entitled Fahrenheit. The album was released in 1986. For this album, the band fired their lead singer Fergie Frederiksen who had replaced Bobby Kimball on the groups Isolation album. Once again, the band introduced a new singer in Joseph Williams. The album spawned two hit singles with the songs “Without Your Love” and  “I’ll Be Over You.” The Fahrenheit  album also featured guest appearances by Michael McDonald and David Sanborn.

Landing in the number six spot on our top 10 Toto Albums list we present the album Isolation. This is a very interesting album in the band’s career as the group had to continue on with the loss of Bobby Kimball as their lead vocalist. The group would eventually hire a new lead singer named Fergie Frederiksen who was a journeyman lead vocalist having sung lend in the band Angel, (remember the Frank Zappa Punky Meadows story?) Survivor, Trillion and LeRoux. The band still sounded fantastic, the songs were great especially “Angel On Fire,” and “Stranger In Town,” and all seemed well except for the critics who loved to give Toto a hard time.

At the halfway point on our top 10 Toto Albums list is the band’s album titled Hydra. The Hydra album was released in 1979. It was their follow up album to their stunning self titled debut album. The album did not have the commercial success that their debut album had, but overall it was a great rock and roll record with many progressive overtones especially on the title track. The band could could sound like UK on a track and then suddenly sound like Earth Wind & Fire. The band did score a top 40 hit single with the song “99,” sung by Steve Luthaker.

At the number four spot on our top 10 Toto Albums list we present an album that many people may not be familiar with. The Toto album Mindfields was released in 1999. Toto’s original lead singer Bobby Kimball, had left the band in 1982 but returned for this wonderful new album in 1999. There was a nice loose groove on this album that one  could easily hear on tracks like “Mysterious Ways,” where the thunderous playing of Steve Lukather’s guitar solos meets the soulfulness of Bobby Kimball’s vocals and backup singers. The great Simon Phillips plays drums on the album as an able replacement for the late Jeff Porcaro. One of the albums highlights is the ten minute slow blues tune “High Price of Hate.” Bobby and Steve just tear it up on the smoking track. The keys played by David Paich are on fire. Yeah baby!

In the number three spot on our top 10 Toto albums list we present the stunning Toto album entitled The Seventh One. The album was released in 1988. Obviously titled after the point that this was the band’s seventh album release, this fantastic album was only released on CD and cassette at the time. It blew us all away at how sonically great this album sounded. It all began with the album’s opening track entitled “Pamela.” If you ever want to showcase a great drum sound on CD, play this track. The rest of the album consisted of strong songs that were performed with the utmost brilliant musicianship because these guys were the best in the business. The album also had some guest appearances including backing vocals form Linda Ronstadt on the track Stay Away and the awe inspiring voice of Yes in Jon Anderson on the track “Stop Loving You.”

Just of the top spot on our top 10 Toto Albums list we take a look back at the mega successful Toto IV album. This is the album that most fans may choose as their favourite for two reasons. Those reasons would be the songs “Africa,” and “Roseanna.” It’s amazing how the song “Africa,” seems to keep coming back into pop culture every couple of years. It’s popularity in 2021 might just be even bigger than it was in 1982. The Toto IV album spawned five single releases. However, it was the album itself that was a great success as it won the Grammy Award for Album Of The Year in 1982. After their second and third albums were pretty much commercial failures at least in Columbia Records eyes, Toto IV proved that Toto was still a major force to reckon with in the music world.

We close out our top 10 Toto Albums list with Toto’s debut album entitled simply Toto. This album blew everyone away when it was first released in 1978. The album’s debut single as well as the band’s first single ever released entitled “Hold That Line,” sounded incredibly original, It’s piano opening was so unique one could never get tired of listening to it. Those of us who brought the album based on the single alone were very much surprised to find that the rest of the album was equally as good if not better than the single.

These guys were like a cross between Boston and Steely Dan. Bobby Kimball had the vocals talents of a Brad Delp, Steve Lukather had the big sounding guitar power of a Tom Schultz but with way better chops, while the rest of the musicians in Toto all sounded at the same level of the musicians of those legendary Steely Dan albums which in some cases they actually were the musicians on those high end Steely Dan albums. This was a great rock band that was originally too harshly criticized by rock journalists who for whatever reason needed to find something bad to say about Toto because the music was just so well recorded, written, produced and performed , they didn’t seem to like that a band could be that good.

There are just so many great tracks on this album including the songs “I’ll Supply The Love,” the raging “Goodby Girl,” that opened side two, the cranking jazz influenced  “Georgy Porgy” which would become a concert highlight with it’s extended jams and smokin grooves, and many more. In a decade that saw the release of countless debut albums from bands that would become legendary, Toto’s debut album released in 1979 stands as one of the best.