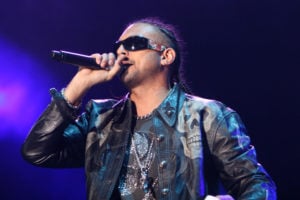 Our top 10 Sean Paul songs list looks at the body of work of the leading Jamaican dancehall singer on the US charts. Born in 1973, Sean Paul met his first producer Jeremy Harding in his studio when he showed up for a piece of musical career advice. While in the studio, producer Harding took his time to listen to Sean Paul’s vocals. During these sessions, the song “Baby Girl” was born, prompting the producer to collaborate with this promising artist.

Sean Paul continued working with producer Harding releasing several tracks that gifted the artists some following locally. In 1998, he made a cameo appearance in the American crime drama movie, Belly. Sean Paul collaborated with dancehall artist Mr. Vegas and rapper DMX in releasing the hit “Top Shotter,” which was featured on the film. Without a doubt, the collaboration was a definitive moment for Sean Paul’s music career. Soon after featuring on the film, he started working on his debut album, Stage One (2000).

The big break for Sean Paul was soon coming thanks to the massive effort put in by producer Harding and Atlantic Records for his sophomore album, Dutty Rock (2002). Dutty Rock (2002) received critical acclaim upon release thanks to “Gimme the Light,” which sparked the world, promising even greater music from this Jamaican dancehall artist. The album also featured “Get Busy,” Sean Paul’s first number one song on the Billboard Hot 100. “Get Busy” was nominated for a Grammy Award in the Best Rap Song category. On the other edge, Dutty Rock (2002) won a Grammy Award for the Reggae Album of the Year.

The Trinity (2005) tried so hard to replicate the success of his Grammy Award-winning sophomore album. Luckily, songs on the album earned him four nominations at the 2006 Billboard Music Award. His hit song “Give It Up to Me” helped him earn the Favorite Pop/Rock Male Artist Award in the 2006 American Music Award ceremony outclassing Nick Lachey and Kanye West. Sean Paul later embarked on a fully Jamaican-produced project Imperial Blaze (2009), which reached number one on the Billboard Reggae Chart.

Sean Paul would soon release Tomahawk Technique (2012) which received a Grammy Award nomination for the Best Reggae Album. “She Doesn’t Mind” and “Got 2 Luv U” were the most popular songs from the album, with Sean Paul featuring Alexis Jordan’s vocals in the latter. His sixth studio album, Full Frequency (2014), was quite a success, having it blend Sean Paul’s dancehall style with pop and hip hop vibes. Guest appearances from Juicy J, Damian Marley, Konshens, 2 Chainz, Nicki Minaj, Iggy Azalea, and Nyla of Brick & Lace added glamour to the album. In the same year of this album’s release, Sean Paul was featured on the English version of Enrique Iglesias’ hit “Bailando.”

Sean Paul chose to leave Atlantic Records to pursue music as an independent artist. He would soon come back stronger, having him featured on successful hits by Clean Bandit, Sia, and Little Mix. However, he would soon sign with Island Records, where he released the EP Mad Love The Prequel in 2018. Sean Paul surprised his fans with his seventh studio album, Live N Livin (2021), under his record label, which he named after his Grammy Award-winning album. Currently, he is working on his eighth studio album, which might get released soon.

Ushering us to the top 10 Sean Paul songs is the hit “We Be Burning’.” The song is featured on the album The Trinity (2005). “We Be Burnin'” had its lyrics initially allude to smoking marijuana while stating some compelling reasons why the drug should be legalized.

The original song finds Sean Paul outlining the benefits of using marijuana while advising people to trash harder drugs such as cocaine. However, Sean Paul had to make some lyrical changes for the radio release, with marijuana use not legalized in most places at that time. The song peaked at number six on the Billboard Hot 100 Chart.

“Like Glue” is one of the musical gems you will find in the Grammy Award-winning album Dutty Rock (2002). Initially, the song’s lyrics featured on the intro of Sean Paul’s breakthrough hit “Gimme the Light.” Thanks to Toby Kelly, with whom Sean Paul turned the intro to a song by penning its full-length lyrics. Amazingly, the song outshined many singles from this dancehall artist, including his breakthrough song “Gimme the Light.”

The song’s lyrics allude to Sean Paul’s carefree attitude to people’s perceptions having him reaffirm his commitment to his lover. “Like Glue” would soon be among Sean Paul’s songs to enter the Billboard Hot 100, having it reach a peak position of number thirteen.

The Diwali Riddim by the Jamaican artist and producer Lenky was quite popular in 2002, with lots of songs sampling it. Sean Paul hesitated not to release a song using the riddim. The result was “Get Busy,” a party anthem released on his album Dutty Rock (2002). “Get Busy” performed great on the Billboard Hot 100 Chart, reaching number one. At the same period, Sean Paul enjoyed a number one song on the Billboard Hot 100 Chart, with Beyoncé’s hit “Baby Boy,” which he was featured.

Sean Paul is an artist who has pushed the limits of his music career. His EP Mad Love the Prequel is enough proof of how resilient he has been throughout his long-lived career. “Mad Love” is one of the shining stars in the Mad Love the Prequel EP. The song finds Sean Paul teaming up with producer David Guetta while featuring guest vocals of Becky G in releasing this splendid dancehall track.

Number six on our top 10 Sean Paul songs is the masterpiece “(When You Gonna) Give It Up to Me.” Sean Paul initially released this dancehall song on his album The Trinity (2005). However, a collaboration with Keyshia Cole on the song was released to promote the film Step Up made it even bigger. The song rose on the Billboard Hot 100 Chart reaching a peak position of number three.

Tomahawk Technique (2012) saw Sean Paul evolve into a dancehall artist who prominently featured trance and dance vibes in his songs. The energy and trance vibes of “She Doesn’t Mind” were rare in most of the songs by Sean Paul in the previous albums. “She Doesn’t Mind” is a work of art by Sean Paul, award-winning songwriter Benny Blanco, and mega-producer Shellback. Sean Paul gives ladies giveaway tips on attracting the attention of a gentleman on the dance floor.

Few dancehall artists can replicate Sean Paul’s success on the US charts. “Temperature,” featured on The Trinity (2005), was his third single to reach the number one spot of the Billboard Hot 100. While the song only spent a week at the number one spot, it set a record of seventeen weeks on the top 10 in the Billboard Hot 100. However, the record would soon be erased by the marvelous hit “Promiscuous” by the famous Canadian artist Nelly Furtado featuring Timbaland. Blending dancehall and pop helped the song emerge as a reputable international club hit.

“Got 2 Luv U” might not have been a monster on the US charts like most of our top 10 Sean Paul songs. However, its fame grew slowly, becoming one of the best Sean Paul songs over time. The song was penned by Sean Paul, Stargate, and Ryan Tedder of Onerepublic, while featuring American artist Alexis Jordan on the vocals. Despite only reaching a peak position of number eighty-four on the Billboard Hot 100, “Got 2 Luv U” was a number one hit on singles charts in Australia, Romania, and Switzerland.

Number one on our top 10 Sean Paul songs list is the collaborative hit “No Lie.” The song was written by Sean Paul, Emily Warren, Andrew Jackson, Pip Kembo, and Sermstyle. “No Lie” is featured on the Mad Love the Prequel EP. Sean Paul collaborated with legendary singer Dua Lipa in the song’s vocals. The song finds Sean Paul narrating about a woman he met in a club. Sean Paul feels like this is the type of lady that complements him and wishes to have her for himself. The song is not far from hitting a billion views on YouTube, a rare feat by a dancehall artist.