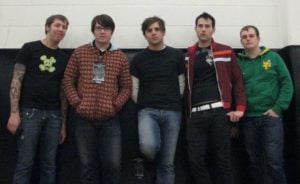 Our Hawthorne Heights Albums Discography take a look at the catalog of a band out of Dayton Ohio that stand as one of the most melodic metal pop bands of the 21st century. The group mixes some of the elements of metalcore and thrash into their sound but the low pitched shouting screams of metalcore are not what dominates this band’s music. There sound seems more inspired by 90s bands like Blink-182 and Sum 41 than many of the metalcore bands of the 200s and 2010s like Killswitch Engage and Every Time I Die. However the band’s origins as the group As I Lay Dying definitely tilted more towards the Metalcore sound.

With the end of the band As I Lay Dying, the new group  named Hawthorne Heights released their first album in 2004 entitled The Silence in Black and White. It was a brilliant album that still stands as the band’s hallmark moment. Still, the group has continued to release breathtaking albums that have earned them a loyal fan following and critical praise.

Opening up our Hawthorne Heights Albums Discography Ranked List we present the album entitled Skeletons. This was a really good album although it’s probably our least favorite among the bands stellar studio albums. The Skeletons album was released in 2010. It was Hawthorne Heights fourth studio album release. The Skeletons album hit number fifty on the US Billboard Top 200 Albums Charts. The album featured JT Woodruff on lead vocals, guitar and piano,piano, rhythm guitar, Micah Carli on lead guitar and vocals Matt Ridenour on bass and Eron Bucciarelli on drums.

End of the Underground

In the number seven position on our Hawthorne Heights Albums List is the dazzling album entitled The Rain Just Follows Me. This is the band’s most recent album and it’s fantastic. The title track is just a pure pop gem that balances some 70s pop elements with 90s punk pop for a perfect blend that sounds fresh in 2021. The album was released in  September of 2021.

The Rain Just Follows Me

Thunder In Our Hearts

At number six on our Hawthorne Heights Albums List is the raging album entitled Bad Frequencies.  The album was released in 2018.  By this time in 2017 the band consisted  of JT Woodruff on lead vocals and guitar, Mark McMillon on lead guitar and screaming, Matt Ridenour on bass and Chris Popadak on drums. The album hit number ten on the US Billboard Indie Albums Charts.

The Perfect Way to Fall Apart

Straight Down the Line

At the number five spot on our Hawthorne Heights Albums List we present the album entitled Fragile Future. This is Hawthorne Heights only album to chart in the United Kingdom. The album was released in 2008. The album hit number twenty four on the US Billboard Top 200 Albums Chart which is quite respectable for a band with their sound. On the US Billboard Indie charts it was a top 10 hit peaking at number four.

The Business of Paper Stars

Until the Judgment Day

Sugar in the Engine

Let Go of Everything You Know

Moving along on our Hawthorne Heights Albums List we present the album entitled Zero  The album was released in 2013. Interestingly the album was released on a label owned by a video game publisher named Red Entertainment. The album hit number 118 on the US Billboard Top 200 Albums Charts.The album also broke onto the US Billboard Top R&B Albums Charts peaking at number thirty five. The band on the album Zero consisted of JT Woodruff on lead vocals, Micah Carli on lead and rhythm guitars and shouting, Mark McMillon on guitars, Matt Ridenour on bass, Eron Bucciarelli on drums.

Put Me Back Together

Lost in the Calm

Taken by the Dark

Over and Out (Transmission 2)

In the number three  spot on our Hawthorne Heights Albums List we showcase the album entitled If Only You Were Lonely. The album was released in 2006. This was the band’s second album and their only album to hit number one. The record nailed the top spot on the US Billboard Independent Charts. The album hit number three on the US Billboard Top 200 Albums Charts making it their highest charting album of their career on the mainstream charts. It was also the band’s second Gold album.

This Is Who We Are

We Are So Last Year

Dead in the Water

I Am on Your Side

Where Can I Stab Myself in the Ears

# 2 –The Silence in Black and White Acoustic

In the number two spot on our Hawthorne Heights Albums List we present the exhilarating album entitled The Silence in Black and White Acoustic. The album was released in 2014. We were not sure where to out this one at first because it’s an acoustic version of what we believe is the band’s best album. At times we actually prefer some of the acoustic versions better. Yet, their first album still is just such an incredible record we had to put the original at number one.

Ohio Is for Lovers (Acoustic Version)

Speeding Up the Octaves (Acoustic Version)

We wrap up our Hawthorne Heights Albums List with the grand album entitled The Silence in Black and White. The raging album stands as the band’s debut record under their new name Hawthorne Heights. It stands as there most popular album they ever released. The band celebrated this one with a 10th Anniversary issue of the record done acoustically which we just took a look at. The original album was released in 2004. The album hit fifty six number on the US Billboard Top 200 Albums Charts. The album also broke onto the US Billboard Indie Albums Charts peaking at number three. It is the band’s biggest selling albums of all time and their only record album to go platinum in sales.

Ohio Is for Lovers

Speeding Up the Octaves