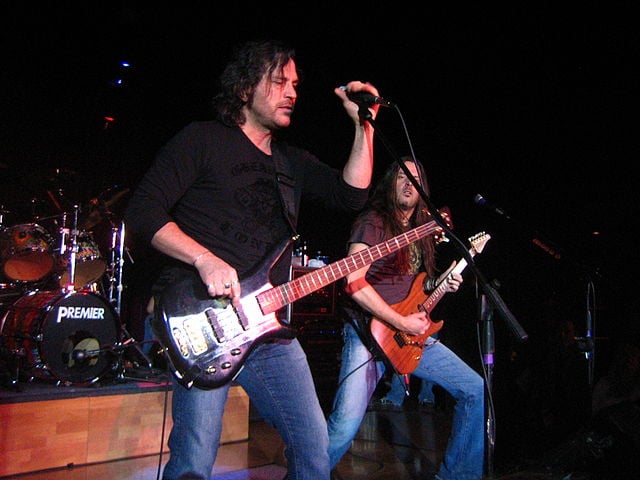 Our Top 10 Winger Songs list looks back at the music of a great late 80s early 90s rock and roll band fueled by great musicianship. Glam Metal, also referred to as hair metal, pop-metal, and hair bands began to emerge in the early to mid-1980s. They were famous for not only their music but the long (sometimes big) hair, spandex, and killer voices. Glam metal is a subgenre of heavy metal that incorporates kicking guitar riffs and pop-influenced hooks. In the early 1980s, this new music style was pioneered by “hair bands” such as Ratt, Quiet Riot, Twisted Sister, Motley Crue, Bon Jovi, and others.

I was in middle school when some of the above bands first emerged. I fell in love with the music and the bands. The guitar riffs, the raspy voices, and the hair (what girl wouldn’t love the hair). The sound and style were similar but different. Each band was unique in its own way. As a pre-teen and teenager, I was mesmerized. Thirty-five years later, I still love my 80s hairband music. Some of my favorite bands from that era; Poison, Whitesnake, Warrant, Skid Row, Motley Crue, and Cinderella. I don’t know of any “hair bands” that I didn’t really like.

One of the bands that were popular during this era of music was Winger. Though not quite as popular as some of the other bands, in part, because they came out later in the 1980s when things were starting to fade out. But Winger had its extremely loyal fans, me being one of them. The members of Winger, who formed in 1986, were; Kip Winger (lead singer/bass), Reb Beach (lead guitar/backing vocals), Rod Morgenstein (drums/backing vocals), Paul Taylor (keyboard/backing vocals), and John Roth (rhythm guitar/backing vocals). Every member of the band played multiple instruments, which made them unique. Winger was together from 1986 to 1994, except for Paul Taylor, who left the band in 1992. At that time, Winger recorded three albums. In The Heart of the Young, their second album was released in 1990. They then went on a 13-month tour, over 230 dates, with Extreme, Slaughter, Kiss, Scorpions, and ZZ Top.

Winger’s first album was released in August of 1988. Winger achieved platinum status in the United States and gold status in Japan and Canada. In February of 1989, the album hit number 21 on the top 200 charts (Billboard 200) and was in numerous spots on the chart for 63 weeks. In 1990 Winger was nominated for “Best New Heavy Metal Band” by the American Music Awards.

In 1990 they released their second album. This one reached 1 1/2 platinum in the United States and reached gold in Japan. As mentioned above, they did a 13-month world tour. Their 3rd album, Pull, was recorded in 1992 and 1993. This album was produced by Mike Shipley and was not as popular as their first two. It did, however, gain solid reviews. By this time, Paul Taylor had been gone for a year. When the band went on tour, they call on John Roth to play rhythm guitar.

Unfortunately, this album came out at the same time that “grunge” music began being played on the radio. It affected the Pull album’s sales, as did Atlantic Records, saying there were no hits on the album. Therefore, the record label didn’t promote it as much as they could and should have. The grunge style pushed aside many of the glam metal bands, including Winger. In 1994 Winger disbanded and went their separate ways. Kip Winger went onto a solo career; Reb Beach played guitar for Dokken and Alice Cooper before landing a permanent position with Whitesnake in 2002. The other members focused on music sessions.

We open up our top 10 Winger Songs list with the track Hungry. The  song was on Winger’s debut album Winger, and it #34 on the Billboard charts on October 20, 1989. Atlantic Records released the debut album on October 10, 1988, and it was #21 on the Billboard 200 on February 10, 1989. This album was extremely popular, and I love every song on it. The song is about a man trying to cope with his wife’s loss; she was killed in a car accident. Ironically, one of their other hits was playing on the car radio before the crash occurred. The lyrics and vocals are very emotional, and you feel the pain and sincerity in Kip’s voice as he goes through the song.

Another song from their Winger album. This one made it to #27 on the charts on November 4, 1988, just a month after the album came out. There is killer acoustics throughout the song. Kip’s vocals are alluring and make you want to listen to and learn every word of the darker, cryptic song. It is a beautiful, wonderfully written song that, some say, didn’t get as much attention as it should have. To me, it was more of a power ballad, but it was more upbeat than you would normally hear.

This song came off of the band’s second album, In The Heart of the Young, released on June 24, 1990, and landed on the Billboard 200 at number 15 on August 24, 1990. The song “Easy Come, Easy Go” hit the charts at number 17 on March 1, 1991. It was, unfortunately, one of the songs that got caught in the crossfire of the ‘grunge’ music emerging. The album’s bad timing still sold 1 million copies, which isn’t too shabby. I loved this album as well as their first album, Winger.

Continuing with our Top 10 Winger songs list we turn to another song off their platinum debut album. “Seventeen,” is an upbeat song with killer guitar playing by Reb Beach. “Seventeen” hit the number 19 spot on the charts on February 24, 1989. There were good and bad reviews about this song because of Kip’s age and the band singing about sexual innuendos about a 17-year-old fan. The song was harmless, didn’t mean anything close to what some critics were saying. Reb Beach had come up with the riff in this song when he was 15 years old but had no idea what to do with it. He played it for Kip and their producer Beau Hill (their producer), and Kip had the perfect place for the smoking riff. This video did extremely well on MTV, thanks to video director Mark Rezyka.

the only song on their album, Pull, made it to the charts. June 25, 1993, it was number 15. The album was released May 18, 1993, and was #83 on the Billboard 200. This album is heavier and harder rock than their first two albums. Definitely underrated and underplayed. It has killer guitar playing throughout the whole song. Kip’s voice is a little raspier but still full of feeling and emotion. There is an awesome harmonica solo in the song. The video is amazing, and I have to agree with the critics; if this album had come out sooner, it would have kicked butt on the charts.

This is a personal pick of mine. After listening to the whole Pull cd, I had to throw another song off of their third album onto the top 10 Winger Song list while researching and writing. This song comes with a beautiful acoustic solo at the beginning. Because this was an underrated album, this song didn’t make it on the charts. It’s an incredible ballad with a rougher sound than on the first two albums. I loved all of their ballads, but I like this one the best because of the rough sound. “Lucky One” is well worth the listen.

Whether you were (are) a Winger fan or not, every single person reading this can relate to this song. The song landed on the charts in August of 1989 and landed at the #8 spot. Again, Kip’s voice is perfect. You can feel the conviction and hurt in his voice as he belts out this ballad—cool guitar rhythm at the beginning of the song and throughout, as always. Reb Beach was a God. This is my second favorite ballad by Winger. Don’t forget about the guitar solo in the middle of the song!

I have seen the title spelled both ways. Coming in at #3 on our top 10 Winger Songs, this song hit #6 on the charts in August of 1990. From their second album, In the Heart of the Young. This song, written by Kip Winger and Reb Beach, is sassy. The video is great! The famous Michael Bay directed it. He also directed all of the Transformers movies. The song is very upbeat, giving you the feeling to get up and dance. The unique voice of Kip Winger brings the song to life.

Miles Away was  released off their second album, “Miles Away” made it to #14 on December 7, 1990. Another intense ballad by Winger, wrote by Paul Taylor, that many of us could relate to. Lost loves after high school when we all go our separate ways. Wanting her to think about her feelings and what they had when they were together. In hopes that will change her mind. He reminds her that he was always there, and though he can’t wait for her, he still loves her. Powerful and heart-wrenching for those of us who have been through the exact things.

“Without the Night” is  one of my all-time favorite ballads of the 80s. “Without the Night” is on the Winger album. This song melts my heart. I have been in this place in my life, and many of you reading this have also been there. This song did not hit the charts, which infuriates me! Living your life without someone you love is very hard. But, it is even harder when the sun goes down, and you should be lying next to them—another beautiful song with an awesome guitar solo that pulls at your heartstrings. The emotion in Kip’s voice is even more prominent in this song than in his other ballads. It really brings pain into your heart.

It’s a drag that Winger emerged at the tail-end of the glam metal era and was caught in the cross-fire of the grunge style being introduced. I feel they could have gone a lot farther and done even better than they did. I love Winger just as much as any of the other “hair bands” that I listened to back then, and at 49 years old, continue to listen to.