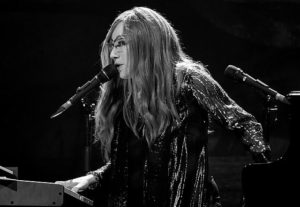 Tori Amos has just announced that she will be releasing a new album on October 29th 2021 entitled Ocean To Ocean. As one of the most genuine and passionate songwriters of the past thirty plus years, Tori Amos spoke about her new album and the reasons why she is releasing this one. Her new album will look at  the events of January 6 2020 when a group of so called insurrectionist attacked the Capitol Building in the worst attack on the Nation’s Capital since the War of 1812 when the British attacked the Capitol. However, the album is not just about the January 6 2020 insurrection. It will also deal with all the tragedies of the past two years and other recent issues.

The album Ocean To Ocean will present songs about the Covid Pandemic and well as other issues like global warming and all the other events of the past couple of years that have left the people of the United States heavily divided among themselves as well as other nations. I’m sure Tori Amos will have plenty to say about you know who… Most artists have been rather silent over the past couple of years in fear of losing half of their audience while others like Bruce Springsteen, Neil Young, Sheryl Crow and a few others have spoken out against what they believe have been true injustices.

Will the release of Tori Amos’ new album Ocean To Ocean inspire other artists to begin speaking out against the situations of the past couple of years? We won’t know until we hear the new album and see the effect it has on people. Yet. knowing the past work of Tori Amos and the way she has spoken out against other issues in her most artistic brilliant fashion, we can only assume this one will be pretty intense.

Tori Amos has also spoke about how she was writing this album from “her own private hell.” So it safe to say, that this will be a record that balances the events of the past with her own personal experiences as we all grow old together.

Tori Amos has not released a full studio album since 2007 when she released the album Native Invader. Throughout her career, Tori Amos has released fifteen studio albums and over forty singles. She is a highly collectable artist as many of the singles she released over the years contained B Sides that were never released before on any of her studio albums. Her first album as a solo artist was released in 1992 entitled Little Earthquakes. She has pretty much been a solo artist for her entire career with the exception of here first album released under the name Y Kant Tori Read when she was unknown. It’s an album that sounds nothing like the true artist she would quickly become.

Tori Amos stands easily as one of the most important artists of the past thirty years. She has been nominated for eight Grammy Awards and has garnered a huge cult following while still achieving mass commercial success.  As her first album dealt with issues of female abuse she has become an advocate for women’s rights and a powerful voice for activism and diversity. We can’t wait to hear what Tori Amos has to say on her new album.