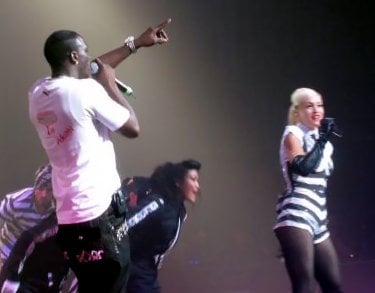 Aliaune Damala Badara Akon Thiam known by his stage name Akon is a Senegalese-American rapper, singer, record producer, songwriter, philanthropist, entrepreneur, and actor from New Jersey. After growing up in New Jersey, Akon started singing and performing while still a teenager. He attended the Clark Atlanta University in Georgia, for just a semester and dropped out. He turned his attention to music-making home recordings and became friends with Wyclef Jean. In 2003, Akon received his record deal.

Akon rose to fame upon the release of his song “Locked Up” featuring Styles P which was his first single from Trouble- his debut album. Later, he founded Konvict Muzik and Konlive Distribution record labels. They served as home for celebrities such as T-Pain, Lady Gaga, Jeffree Star, and many more. Akon is the first solo artist to hold two spots simultaneously on Billboard Hot 100 as number one. Akon is a legend with legendary music songs and below are his top 10 best songs.

This iconic song by Akon is the third single from his third studio album Freedom. The rapper features Colby O’Donis and Kardinal Offishall- a Canadian rapper. The track was released on 6th January 2009 by Universal Records.

This song was also released in other three versions with different featured artists who replace both Kardinal rapping and Colby’s vocals. The original version by the above artists peaked at position 19 on the Billboard Hot 100 and within the top 10 charts in other countries including the U.K and Israel. This song received much applause from the fans, and the Sri-Lankan pop group Gravity did a cover on the 2009 live premier music competition “TNL Onstage.”

Locked Up by Akon is unique since it has a distinctly Latin street feeling than any other of his hits. This track was the lead single from Trouble- his debut album and the track was released on 5th April 2004. This track received so much airplay on the radio during its unmatched success in America.

What makes this track stunning is its deep bass, a lot of feelings, and production with a similar or rather same style to Dre. Everyone admires Akon for his distinctive vocal delivery, composure, and vulnerability to appeal to sensitive guys and ladies. The track is also very appealing to the street hustlers.

What makes the song legendary is its lyrics which are related to having been imprisoned due to illicit activity as well as having an engaging street conversation. To top up on this is the appearance of TAZ for Def Jam Records where he makes several displays of verbal skills that flow poetic and with cool street cred. This track peaked at position 5 on Billboard Hot 100 and within the top 10 charts in the U.K and the Republic of Ireland.

At number eight is this emotional track by Akon. He talks about a past relationship while he is still in his present one. Akon explains how his past relationship was before he became famous and rich and it did not seem worth struggling for. Now in his current relationship, he misses the last and this makes him wish they never broke up. He realizes it was more fun than he thought.

This song was the lead single in his third album Freedom. The song’s music is more distinctly club-oriented. The track includes the elements of the song “Remember” by the German-Belgian act. The song was an amazing hit around the world, but it failed to peak any charts in the U.S. The track peaked at number 6 in the U.K This is an great hit that you should listen to.

Although this song was not the lead single on his debut album Trouble, it is what caught the attention of Universal Music label SRC Records and they gave Akon a contract. What drove their attention was the use of Bobby Vinton sped up samples from 1964 number 1 hit single “Mr. Lonely”. This track became Akon’s first famous worldwide hit peaking at the first position in at least 10 countries and peaked at number 4 in the US Billboard Hot 100.

Akon likes to talk much about a failed relationship and this is one of them. Upon its release, the track became a hit that caught people by surprise since they did not expect to gain so much. Akon talks about a young lad who takes his girlfriend for granted and then one morning the guy wakes up only to find that his girl is gone. In her absence, he realizes how important she was to him. I see this song as a good awakening for guys who take their partners for granted. The killer lyrics ” Cause ain’t nowhere in the globe I’d rather be, Ain’t no one in the globe I’d rather see

Than the girl of my dreams that made me be

So happy but now so lonely” means you don’t know what you have until you lose it.

This is another one by Akon about relationship issues. This song is great with amazing music vocals and that is the reason it features at number 6 on our list. “Sorry, Blame It On Me” is an emotional letter or rather an apology to a girl for an incident that happened at a club thus messing up their tour. To be precise, Akon danced with a 15 years old girl on stage, attracting much criticism and brought much negative publicity on their entire tour. This was an apology to Gwen Stefani for that horrible incident.

Generally, Akon apologizes for every mistake he has done in his private life in this track. The song became very popular and received much applause from the fans. It peaked at number 7 on the US Billboard Hot 100 and appeared on the top 10 charts in several other countries. The song is the fifth from his second studio album Konvicted.

Finally, we are on our top five songs by Akon, and “Smack That” is outstanding. This was Akon’s first single from Konvicted- his second album. The artist features Eminem and the rapper transformed this song into Akon’s greatest hit peaking at Number 2 on the US Billboard Hot 100. The track was nominated for the Best Rap/Song Collaboration. Surprisingly, this track broke into the Latin songs chart.

In the track, Akon describes a girl who is allured to him due to his wealth and fame. After knowing this, Akon prefers to take her to his place and then engage her in some sexual act.

This is one of the greatest and supreme singles by Akon. The track featuring Snoop Dogg achieved continuous airplay in the popular radio stations back in 2006. During this time there were significantly huge hits, but this incredible hit by Akon was a standout.

The track was released as the second single from his Konvincted album in October 2006. This song was Akon’s first single on the Billboard Hot 100 as well as Snoop’s second on this chart too. The track was nominated for the Best Rap/Sung collabo during the 50th Grammy Awards in 2008. The track crossed over to the Latin chart and stood at number 16. At the Billboard Hot 100, it peaked at number 14.

This song is a gem and one that cannot go unnoticed. This track is a reggae-infused tale about forbidden love. Typically the song is an apology for his previous tit “Sorry Blame It on Me” This song was his second consecutive number one hit singles and marked Akon’s commercial apex. This track includes a sample from “Zimbabwe” by Bob Marley and a line from R.Kelly’s charting pop hit “Ignition”

The song was released as his third single from the Konvicted album in January 2007. The track debuted at position 79 on the Billboard Hot 100, but after ten weeks, it peaked at number one on the chart. As of January 2008, this track had been certified three times and had made over three million digital sales in the United States alone, which clearly shows what a hit it was.

This is an iconic song by Akon and for this and many other reasons, it appears at number two on our list. It is the second single from Akon’s debut studio album Trouble. The track was released on 21st December 2004 solely in Latin America and other European countries.

The basis of his song is Akon talking about social affairs and the social issues that emerge among individuals living in the inner cities. Typically most of the people in the inner cities or rather the “Ghetto” are the minority and they undergo a lot, but little is said about them. This track is very emotional and worth being included in your playlist.

The track peaked at number 92 on the US Billboard Hot 100. Akon describes the meaning of the song as what the poverty cycle means for those living in the ghetto- poor inner-city areas. The music video was filmed in New Mexico, New Jersey, and Navajo Nation Reservation.

At the top of our list is this stunning song ” Hold My Hand”. It is a collaboration with Michael Jackson and the voice of these two legendary artists is enough to melt your heart. This is a love song where Akon urges his love to lovingly hold his hand and he promises that he will do all he can to keep their relationship and love. This is an incredible piece that you can dedicate to your loved ones to show how special they are to you and that you care about them.

“Hold My Hand” was originally recorded by Jackson and Akon in 2007. This track was an international hit that peaked in the top 10 hits in countries such as Denmark, Norway, Switzerland, United Kingdom, and more. The song peaked at number 39 on the US Billboard Hot 100, number 33 on the US Billboard Hot R&B/Hip-Hop Songs. It is an amazing track that is worth listening to.

Artist is a legendary artist who boasts an amazing voice. He has done amazing hits as a solo artist and in collaborations with famous artists including Snoop Dogg, Eminem, and Michael Jackson. The above iconic songs by Akon will leave you thrilled and wishing to listen for more. Enjoy!