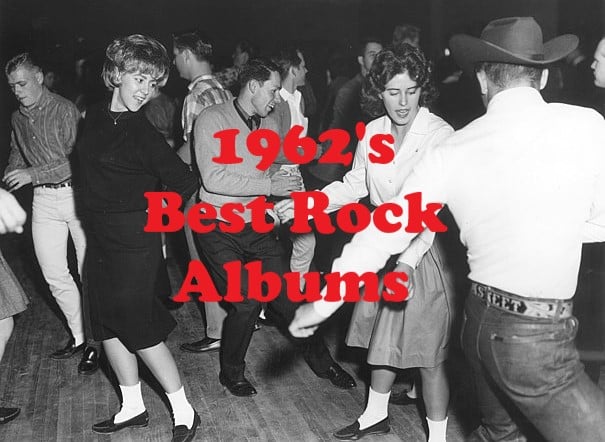 1962’s Best Rock Albums list defines a year that went twisting mad, literally! The Twist dance craze of 1962 defines one of the biggest dance crazes of all time. You think the Macarena was big? At least Van Halen didn’t release an album of Macarena dance tunes or Black Sabbath present an album of Macarena metal mixes. Sounds far out? Well, in 1962 that’s exactly what rock and roll artists did. Some of the great rock and roll pioneers of the 1950s like Chuck Berry and Bill Haley all released albums focused on twisting music because the twist was the biggest thing in pop culture. Looking back, it pretty much got out of hand, but there was money to be made and so record companies and musical artists all jumped on the bandwagon and released albums full of twisting music. You can blame it all on Chubby Checker, because that’s the dude that started at all.

We won’t get too deep into the entire twisting craze, but we will say that the twist was not accepted by everyone. Like every new style or form of rock and roll and dance, it was met with a push back by those outside of the celebration. Conservative parents, school administrators and religious orders all condemned the twist as a danger to society because of its so-called sexual connotations. Some people in the medical field warned it could cause significant damage to your ligaments muscles and bones. And all that did was fuel the fire even more as album after album was released with some form of the word twist in the title.

Looking back at 1962, one can also thank the heavens that The Beatles would release their debut album in 1963 and change everything. Rock and roll needed to be rescued and The Beatles came along at the perfect time. Of course, there were some stunning debut albums in 1962 from artists that would become legends. First and foremost, the debut album from Bob Dylan was released in 1962. The year1962 also saw the release of debut albums by The Beach Boys, The Supremes and the Four Seasons. Three groups that would deliver some of the greatest harmonies and vocal performances ever on record. Stevie Wonder also released his debut album as a young boy in 1962.

1962’s Best albums list is a presentation of various musical styles. There are many great r&b albums on the list as great records from James Brown, Aretha Franklin, Ruth Brown and Mary Wells played a significant factor in the music of 1962. Like we saw in 1962, the sounds of r&b and soul would blend with rock and pop to great success. Elvis Presley continued to release albums as well as Dion, The Everly Brothers, Bo Diddley and Ray Charles. Instrumental bands such as The Ventures and Duane Eddy would become very popular as television and movie themes were reinvented by these groups. One of the biggest instrumental bands would prove to be Booker T and the MG’s with their huge hit “Green Onions.” The group would also serve as the backing band on so many great Stax records.

We hope you enjoy looking at this 1962’s Best Rock Albums list. We also need to mention that jazz music was still huge in 1962. So many great jazz records were released that crossed many genres. However, we are going to set up a separate section on the website to explore the impact of jazz on pop culture. Classic Rock History is defined by everything that revolved around basis rock and roll. We will cover it all.

# 49 –Twistin’ Knights at the Roundtable – Bill Haley & His Comets

# 23 – The King of the Gospel Singers – Little Richard

This one stood out among all the rock and r&b records released in 1962. Nothing sounded like this album. A voice of a generation so powerful was born on this record.