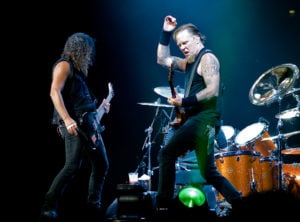 Imagine just hanging out at your local club having a drink, talking with some friends listening to the DJ or watching a local band play their hearts out when onstage jumps Metallica in a surprise performance. Yeah baby talk about heartattack city. There is nothing more thrilling to see a major rock ‘n’ roll artist playing unexpectedly in a nightclub even if it’s a large nightclub. However, the surprise of the performance and the ultimate realization that you’re going to see these mega stars right up close just makes you feel like you just won to lottery. Bruce Springsteen has been known to often sit in with some of his friends in clubs, especially for artist he’s working with like he did in the 90s quite often with Joe Grushecky and The Houserockers or Gary U.S. Bonds and a few others. The Rolling Stones were known to appear in clubs as they were warming for tours. There have also been Paul McCartney sightings in clubs. If you think your shocked to death when seeing a Paul McCartney jump on the stage, imagine how the musicians in the local band felt when he jumped on stage with them. With Metallica there were no local musicians to jump on stage with. It was all Metallica and they did it most recently last just last night.

Metallica’s most recent local performances were not complete surprises in the sense of a Bruce Springsteen or Paul McCartney jumping on stage in a club of a hundred people. Yet there were pretty close and pretty much offered the same euphoria and surprise. Just last week on Thursday Night September 16, in the band’s hometown of San Francisco the band announced at the very last second a show at a very small theater in San Francisco called The Independent. This theater located at  628 Divisadero Street in the heart of San Francisco, California s pretty much as small as it gets for actual Independent music theatres. At around 500 seats, it’s pretty much a large movie theatre. The theatre hosts concerts by many up and coming artists, some local acts as well as many other smaller acts in the music business but of course no names as big as Metallica.

Metallica’s management did not let anyone know of the show until the same day as the concert. It was announced on social media sites that Metallica would be playing a show that evening at the The Independent on Divisadero Street. Tickets were announced at 70s and 80s prices of only $20 dollars a ticket. The social media account directed fans who wanted to attend to head to the theater box office that afternoon with proof of being vaccinated for Covid along with personal identification and cash. Tickets were to be sold on a first come basis as only the first few hundred people in line would be able to score tickets. It really didn’t get much fairer than that as Metallica gave little chance to the scalpers who would have definitely taken advantage of the situation if there had been more notice. Probably some of them figured how to do it anyway.

It must have been sheer excitement and nervousness for those who found out about the concert and headed there on wheels of fire to get those tickets. Metallica did not disappoint there fans as the band was eager to get in front of a live audience for the first time in two years. The band delivered a blazing sixteen song set opening the show with the song “Whiplash,” which they had never opened a show with before., The band even set up a mosh pit on the floor where fans just went completely nuts. Probably not the best idea during Covid, but people are looking to free themselves of the chains of this horrible virus and what better way to do it.

It seems Metallica had so much fun on Thursday night in San Francisco, they had the urge to do it again….and not wait to long to do so. Just last night on Monday September 20th 2021, Metallica performed another surprise concert this time at Chicago’s legendary Metro Theater. Like the San Francisco show a few days earlier, Metallica did not announce the show until 1.30 pm on the day of the show. On social media Metallica’s management  presented the simple phrase “So why not do it again?

The Metro is a about twice the size of The Independent in San Francisco. The Metro theater is able to hold about eleven hundred people which is much larger than The Independent but is still pretty much a club setting. Your talking about a band that can sell out eighty thousands seat stadiums over the course of a whole tour. A band that will go down in history as one the greatest heavy metal bands of all time. So just think about how all those Metallica fans felt seeing their much loved band in a theater that fits only a little over a thousand people? Metallica delivered another sixteen song set last night at The Metro. The band opened once again with “Whiplash,” and played such legendary songs such as “Ride The Lightning, Harvester of Sorrow, Cyanide, Through the Never, One, Sad But True, Moth Into Flame, Welcome Home, For Whom The Bell Tolls, Whiskey in the Jar, Fade To Black and Master of Puppets,” in their main performance. Their encores included “Hardwired, Fuel and Seek & Destroy.”

What a night for Metallica fans who had no idea only five or six hours earlier that they would be seeing one of the greatest rock bands of all time as up close as they will probably ever get. Not bad for a Monday night out!

Metallica Continues Their Round Of Surprise Theater Concerts article published on Classic RockHistory.com© 2021