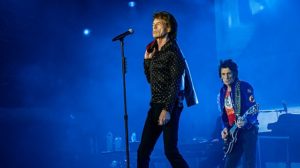 The Rolling Stones played their final concert of their recent No Filter Tour this week. On Tuesdays Night November 23, 2021, The Rolling Stones dished the huge stadiums that they performed at during the tour in favor of wrapping up their No Filter Tour in an intimate setting. Fans with money to spare and of course many industry people were lucky to attend a show that featured no more than seven thousand audience members at the Hard Rock Live Casino Theater in Hollywood Florida. The Hard Rock Live Theaters that support the Hard Rock Casinos are spectacular venues to see live shows as the seats are so close to the stage. The venues are very classy and comfortable. Seeing what many believe the greatest rock and roll band ever in classic rock history in a venue like that is a once in lifetime experience. Quite possibly it may have also been the last time anyone will ever experience seeing the The Rolling Stones again. If it was, the song”Satisfaction,” would be the last Rolling Stones song ever played as the band closed out the concert Tuesday Night with a song that has deep meaning in the band’s entire history.

It’s tough to gauge if it will be the last time. Many years ago no one would have ever thought that the Rolling Stones would continue into their 50s or 60s without even mentioning their 70s. Of course we have always seen blues musicians continue to play until their last days on Earth. Look at Tony Bennett. At 97 years old the man has just released an album that was nominated for Album Of The Year. Even with the diagnosis of Alzheimer’s, Tony Bennett has continued to sing and has just recently retired from touring. Frank Sinatra continued to sing into his 80s. There is precedent for musicians to continue. Will the Rolling Stones follow that precedent and continue to perform?

While jazz and blues musicians have shown the will to continue forever, rock and roll stands at least twenty to forty years behind them. We are not sure yet what will happen with many of the great rock bands from the 60s and 70s and even 80s. The Rolling Stones are one of the longest running bands in rock and roll history that are still together. Many times fans thought that when The Rolling Stones wrapped up tours that  would be the last chance to have ever seen them again. Yet time and time again The Rolling Stones have come back.

It all may be different this time for several reasons. First and foremost is the passing of Charlie Watts. While some fans questioned The Rolling Stones decision to finish the tour without Charlie Watts, the band has already planned on continuing for a while without him when Charlie Watts became sick and urged the band to use a replacement drummer until he recovered. One can only imagine how much money would have been lost for so many people if the remaining shows had been cancelled. Have you seen the cost of Rolling Stones tickets even at face value in stadiums holding 80s thousand people?

Of course there is the age factor that obviously plays a bigger role now than in previous tours. Mick Jagger was born in 1943 in the middle of World War II making him seventy eight years old. Keith Richards was another World War II baby at seventy seven years old. Ron Wood is the baby of the last three remaining Rolling Stones at seventy four years old.

Many bands continue to tour for financial reasons. It’s doubtful that financial reasons would be the leading factor behind the Rolling Stones deciding to hit the road again. We know nothing about their finances but it seems pretty safe to say that Mick, Keith and Ron are pretty set up financially along with their families. Of course for all the other musicians, roadies, management and all other personal involved in a Rolling Stones tour it is very helpful form a financial standpoint when the Rolling Stones hit the road. Additionally, there is probably no other band on the planet short of a Led Zeppelin tour (will never happen) that could generate the amount of money a Rolling Stones tour brings in. It’s hard to walk away from that. Yet, time is not on their side.

Rolling Stones Wrap Up Tour In Florida With An Uncertain Future article published on Classic RockHistory.com© 2021

Complete List Of Bullet For My Valentine Albums And Discography