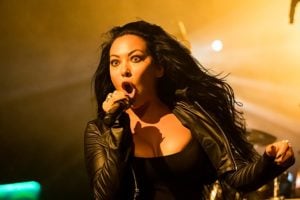 Our top ten Butcher Babies songs looks at the work of a modern heavy metal band who have been active since 2010. The two founding members are co-vocalists Heidi Shepard and Carla Harvey. The rest of the band is made up of guitarist Henry Flurry, bassist Ricky Bonaza and drummer Chase Brickenden.

Butcher Babies were first formed in 2010 by Shepard and Harvey. They released their debut ep in 2011. After this they released a comic book at that year’s Comic Con in San Diego. A year after this they produced their first music video for the song “Mr Slowdeath.” The same year they signed a deal with record label Century Media and soon afterwards they embarked on their first tour supporting Marilyn Manson. Soon after this they went into the studio with producer Josh Wilbur to record their debut album Goliath which was released in 2013. After its release, it got to number 112 on the Billboard 200 after selling 3,300 copies in the US.. They released the first single from it titled “I Smell A Massacre.”

Over the next year they embarked on several tours before the release of their second album Take It Like A Man in 2015 which was more based in thrash metal as opposed to the more melodic sound of the first record. The first single to be taken off it was “Monsters Ball.” Their third album Lilith was released in 2017. It was recently announced that they are working on a fourth album, the details of which have yet to be announced.

Butcher Babies music is a very aggressive form of metal that rooted in the groove and thrash genres. Despite being influenced by many of the genre’s greats such as Pantera and Slayer, they have frequently compared to legendary punk band The Plasmatics, of whom their name is taken from one of their songs. As female vocalists, Heidi and Carla are particularly big fans of the late Plasmatics vocalist Wendy O Williams, not just musically but also her attitude and legendary status as a rock frontwoman. They also have a strong horror theme running throughout their music which is inspired by films such as The Texas Chainsaw Massacre and The Devils Rejects.

The Butcher Babies are one of the best female fronted metal bands currently going who have not quite yet got the recognition that they deserve. Hopefully, that will change as their career continues to flourish. For anyone who may not be familiar with this band, here is a list of their top ten best songs.

Kicking off our top ten Butcher Babies songs is the title track of their third album released in 2017. The song is inspired by the biblical story of Lilith who was a demon spirit who would make love to men in their sleep which often led to the men’s wives having unwanted pregnancies. Sexuality is a common theme with Butcher Babies music and this song is about not giving in to temptation.

Next up is a track from the band’s debut album Goliath released in 2013. It was produced by Josh Wilbur who has also worked with bands such as Gojira and Lamb of God. When it was released it got number 112 on the Billboard 200. It also got to number three on the Billboard Heat seekers/ New Artist chart.

Next is another track from the first album. This is a track where the alternating vocal styles of the two vocalists really works. Particularly on the chorus, the harmonising of the cleaner vocals with the screamed ones sounds very good. Despite the fact that the album did fairly well commercially, it did receive some rather mixed reviews.

This next track is one taken from their self-titled debut ep released in 2012. This track was the song for which the Butcher Babies first music video was produced. The ep was produced by Andrew Murdock and received a positive reception with critics comparing its sound to that of Pantera and White Zombie.

Next we have a track from the second album Take It Like A Man released in 2015. It is a track that you could say is something of a partial title track for the band. Butcher Babies stated that the album was a return to their thrash metal roots, as their debut album had more of a nu metal sound. This album has more of a similar sound to that of their debut ep.

This song is also taken from the second album and was its opening track and lead single despite their original plans to release the song “Never Go Back” as the first single from the record. They produced a music video for this song. The record label disliked both the title and artwork of the album and the band had to fight to maintain both of them.

Here we have yet another track from Take It Like A Man which was its third and final single. A music video for it was also produced. It is definitely one of the heaviest songs in the band’s discography, almost bordering on extreme metal. Carla Harvey’s vocals are particularly impressive, proving that a woman can scream just as powerfully as a male vocalist.

At number three is this cover of The Osmond’s 1972 hit that is taken from the Butcher Babies 2014 covers ep titled Uncovered. As you can probably imagine, the sound is more than a little different to that of the original, being given the full Butcher Babies treatment, with screamed vocals and a very heavy groovy guitar sound.

Just off the top spot is another song taken from the first album. The song is very in-your-face and there is not much more to it than that. It is a great metal track that is full of rebellious attitude. The song is rather reminiscent of Slipknot both with the shouted vocals and also the blasting style of the drums.

Topping off this Butcher Babies list is this song taken from Goliath which was the second of three singles to be taken from it. Along with another track on the album “The Death Surround”, it was streamed online after the release of the first single “I Smell A Massacre.” Although it did not make any ground on any real charts, it did receive some promotion through being played as an exclusive track on Sirius XM’s “Octane” show.