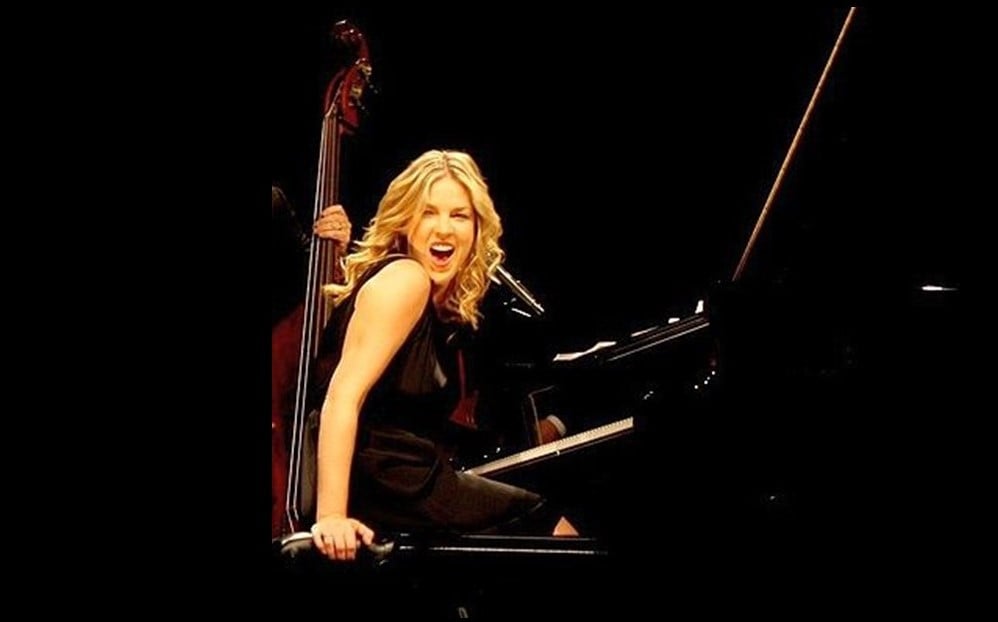 Our Top 10 Diana Krall Songs list chooses 10 great songs from one of the biggest selling and most successful jazz artists of all time. Even more impressive is that she has sold so many albums in a time period that has seen music sales overall, pretty much dwindle to nothing. Diana Krall released her first album in 1993 entitled Stepping Out. From that point in time, Diana Krall has released new studio albums on a pretty continuous basis. Her most recent album was issued n 2018 titled Love Is Here To Stay. It was a duet album with Tony Bennett. So far, she has released fourteen studio albums and one live album. She has appeared as a guest artist on many recordings and has even dabbled in film.

Diana Krall is as musicians would say, the real deal! She is a student of the art form of jazz. She has listened and learned form the masters like all jazz greats do. She has become one herself. In the end, take away the awards, the commercial success and all the hoopla and you have standing in front of you an artist that you never get tired of listening too. An artist that can move you emotionally as a fan, and blow your mind as a musician. She’s that good. This is simply a list of ten of our favorite Diana Krall songs. There are so many, but its fun to make a top ten list. We hope you enjoy it and I’m sure we will hear about all the ones we missed. We agree with you!

We wanted to open up our Top 10 Diana Krall songs list with a real barn burner. This one smokes! Jazz is all about live performance, so while we loved the album version of this great song, we wanted to present the live performance here instead. Diana Krall’s opening piano licks are to die for. Once the band kicks in, it almost becomes just to good to stand. Diana Krall’s great studio version of the song “There Ain’t No Sweet Man That’s Worth The Salt Of My Tears,” was released on her Glad Rag Doll album.

The record featured cover versions of jazz and ragtime songs from the early 20th century. The album was released in 2012. The record was produced by T Bone Burnett. The album also featured an all star cast of musicians including Marc Ribot, Colin Linden, Bryan Sutton, Howard Coward and T Bone Burnett on guitars, Dennis Crouch on bass, Keefus Ciancia on keyboards and Jay Bellerose on drums.

All great artists have the ability to perform with an instinctive sense of subtlety when the song calls for it. One of Diana Krall’s greatest attributes as an artist is her understanding of subtlety. Her recording of Luiz Bonfá and Matt Dubey’s 1965 song “Gentle Rain,” showcases Diana Krall’s own gentle touch on her spellbinding recording of “Gentle Rain.” Diana Krall released the song on her Love Scenes album. The Love Scenes record was released in 1997. The album was produced by Tommy LiPuma. The album also featured Russell Malone on guitar and Christian McBride on bass.

This may be Burt Bacharach’s most covered song, but Diana Krall, like she always does, made it sound brand new. The song was released on Diana Krall’s spectacular album also titled The Look Of Love. The album was released in 2001. Three cheers for the brilliant video that also accompanied the song.

My father worked at New York’s Copacabana in the 1950s. He saw all the legends of jazz along with a lot of other stuff I am careful not to print here. One evening, he took my mom to see Tony Bennett at a place called the Westbury Music Fair located in Westbury Long Island. I think this was in the early 1990s, but I am not sure. When I saw him a few days after the show, I asked him how Tony Bennett was. He didn’t say one word about Tony Bennett. All he could talk about was the female blonde piano player that opened the show and who he swore would become one the biggest stars of all time. Whenever I hear Diana Krall sing this classic Tony Bennett song, it reminds me of what my father said, and how right he was.

This haunting version of “Sway,” was released on Diana Krall’s album Turn Up The Quiet. The album was released in 2017. The record was produced by Tommy LiPuma and Diana Krall. The song “Sway,” was originally written in the early 1950s by Luis Demetrio. In 1954, Norman Gimble wrote English lyrics for the song as it was recorded by Dean Martin. The song has a rather complex history. Nonetheless, Diana Krall’s version ignites the song in a most cinematic film-noir way.

There was no way that we were going to compose a top 10 Diana Krall songs list without at least putting one song from her Live in Paris album on this list. Being that it is such a spectacular live album, it was completely challenging to choose just one song from the record. However, we have chosen one of her most intimate performances to date. Diana Krall’s version of Joni Mitchell’s “A Case Of You,” is simply stunning. This is a must listen. We have included the breathtaking video of her Paris performance of the song below.

We have really tried to cover as many of Diana Krall albums on this list as could fit. However, every one of her albums are filled with such gorgeous songs and performances, it makes us wish we could have just done a top 100 Diana Krall songs list instead. What’s so amazing about Diana Krall is how she can take a song that we have heard a thousand times by so many performers and somehow make us feel like we are hearing it for the first time. That’s magical, that’s Diana Krall.

Diana Krall’s version of the legendary standard “I’ve Got You Under My Skin,” was released on her album When I Look In Your Eyes. The album was released in 1999. The record was produced by Tommy LiPuma, Johnny Mandel and David Foster. This was one of the most successful jazz albums in history. The record won a Grammy Award for Best Jazz Vocal Performance. It was also nominated for album of the year in the main album category competing against pop artists.

Diana Krall’s wonderful album The Girl in the Other Room showed that she was just as big a fan of Burt Bacharach as she was of Nat King Cole. Her previous studio album was titled after one of Burt Bacharach’s most popular tunes in “The Look Of Love.” A great cover that we have already presented on this top 10 Diana Krall’s songs list. On The Girl in the Other Room album we can really hear the impact Burt had on her first attempt at songwriting.

In collaboration with her husband Elvis Costello, who had collaborated with Burt Bacharach five years earlier on the Painted By Memory album, Krall and Costello painted their own pictures of brilliant original songs that echoed the pen of Burt Bacharach. It was not an entire album of originals, but the one’s that were, held their ground against legendary standards. We almost included the wonderful title track but instead optioned for this very moody and addicting original Diana Krall song titled “I’m Coming Through.”

10cc’s “I’m Not In Love,” was one of the greatest recordings of the 1970s. Everything about the song from its mesmerizing melody, brilliant lyrics and stellar production defined a glorious moment in time  when a group of artists came together to release a work of art that was also a huge commercial success. It was so perfect, that pretty much no one has ever attempted to cover the song. Its like trying to cover Queen’s “Bohemian Rhapsody,” or Led Zeppelin’s “Stairway to Heaven.” These are iconic songs. Yet, Diana Krall took that 10cc song and recorded a version of it that floored all of us.

The teaming of Diana Krall and David Foster on 10cc’s “I’m Not In Love,” left us with one of the most enjoyable covers versions of a classic 1970s pop song of all time. Diana’s emotional vocal performance fueled by her instinctive understanding of the depth and meaning of the music showcased why she is one of the great song interpreters of all time.

David Foster’s arrangements of the song defined why he has and always should be one of the most sought out producers to stand by an artist in the studio. This was a merger of two legendary talents that we hope meet again.