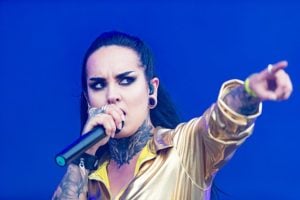 Our Top 10 Jinger Songs looks at the music of a ferocious modern metalcore band fronted by an incredible singer named Tatiana Shmailyuk. Female-fronted metal bands are not rare to come across nowadays. Nightwish, Evanescence and Arch Enemy spring to mind when talking about the best female-fronted bands. However, if you are into modern metalcore, then you have probably heard about Jinjer.

The female-fronted band, which was formed back in 2010, is composed of four members, with Tatiana Shmailyuk being the lead vocalist. She is well known in the metal core circle for her clean vocals and heavy growls. Tatiana and her bandmates were born and raised in war-torn Ukraine, which had a significant impact on their unyielding mentality. Since the band’s inception, they have released three studio albums, a live album and three Eps. The band’s sound is more of modern progressive metalcore, which is influenced by other music genres such as R&B, funk, jazz and soul music.

The band was initially formed in 2009. However, the band considers 2010 as its year of inception following the replacement of Maksym Fatullaiev by Tatiana Shmailyuk. The other band members are Roman Ibramkhalilov, the guitarist, Eugene Abdukhanov (bass), and Vladislav Ulasevich, the drummer.

According to the band members, they never found their official sound until Eugene Abdukhanov the bassist joined them in 2011. Over the years, the band’s popularity has continued to rise with headline tours across North America. We have compiled a list of the top 10 songs from this Ukrainian band that has endeared them to numerous metalcore fans over the last decade.

According to the band members, “Dreadful Moments” is the darkest song that the band has ever released. The song is about childhood misery that causes lifelong trauma o individuals. The song features some intense growling from Tatiana Shmailyuk with mercury-dipped drum blasts by Vladislav Ulasevich. “Dreadful Moments” is the second track from the band’s album “Micro.”

You might be forgiven for thinking that such a brutal track could have such a beautiful meaning behind it. As the song starts, you can hear Tatiana singing in Ukraine before she switches to English. The song is quite dynamic and switches between moments of insane riffing to quiet moments. All in all, the song’s message is deeply personal. The song talks about how the band members feel for the parents they were separated from during the war in Ukraine. Therefore, the track is an anthem that was released as a dedication to the people who raised them and sacrificed everything to ensure that they were happy.

Have you ever asked yourself what would have been the case if Noah (from the Bible) was unsuccessful in his pursuit of saving the earth from the flood? The song “Noah” was another hit from the band’s album “Macro”. Tatiana writes the song from the perspective of Noah not succeeding in saving the earth from the great flood. Though the album contains a number of memorable songs, Tatiana says that this is her favourite.

Most people’s behaviours and mentality are a result of the experiences and situations that they go through. The inspiration behind the song was how fame had changed the lives of the band members. The band members felt that their lives was no longer the same due to months of touring all over the world which resulted in them feeling like “foreigners to themselves.”

Initially, Tatiana was a member of a reggae, funk band. Actually, she has admitted to have always been a fan of reggae music. In the song “Judgement and Punishment,” Tatiana was able to relive her old reggae days by inserting it into a metal track. The message behind the song is about understanding the consequences of our reaction to things that we don’t understand (in some cases).

The number five song in our list of top 10 Jinjer songs is “Words of Wisdom” which comes from their 2016 album “King of Everything.” According to the band, the plan was to release a hardcore video that fans would love. The message behind the song was to rally people to resist censorship and ignorance that was all too common in Ukraine.

Jinjer have continued to prove that they are a band that’s on the rise. “Mediator” is one of their latest single off the album “Wallflowers.” Many have touted their latest album to be their most significant breakthrough that would see them attain global status that they have always been destined to reach. Tatiana’s ferocious growls and clear vocals merged with incredible guitar attacks and fast-firing bass makes this song a must-listen.

The band’s new album, “Wallflower’ was definitely going to feature prominently in the band’s greatest songs. If you want to listen to the band’s melodic grooves synced with their hypnotic style, then this is the song. In the track, Tatiana talks about how heavy thoughts put a heavy burden in the minds of many people and the devastating effects the thoughts can have. According to the band, the song is balanced perfectly and hence they had to come up with a video that perfectly matches the music.

Many Jinjer fans consider “Pisces” to be their best song ever. However, the song narrowly misses top spot in the list of their top 10 songs. The track was released in 2016 from their album, “King of Everything.” “Pisces” catapulted the band from an underground metal band to one of the most recognized metal bands in the world. The track increased the band’s popularity which according to Tatiana goes against the song’s message. The track has gone on to be the band’s most-streamed song on Spotify.

The number one song in our list of the best Jinja songs is the song titled “Home Back.” Tatiana’s lyrical prowess is more often overlooked due to her insane vocals. However, the lyrics for this track are outstanding and go on to show how good she is. “Home Back” is contained in the band’s hit studio album “Macro.” The track talks about years of war and suffering in the Donetsk region of Ukraine, where Tatiana hails from.