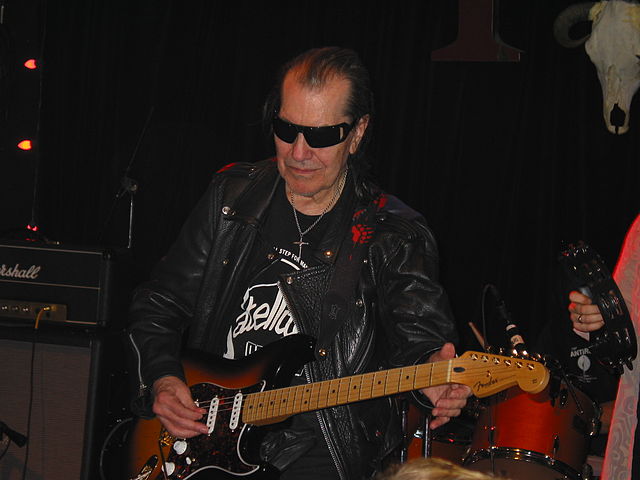 Our Top 10 Link Wray songs list presents the songs and guitar playing of a rocker who inspired the sound of classic rock guitar more than any other artist. While much deserved credit has been given to the legendary blues artists like Robert Johnson, Elmore James and the 50s rockers Chuck Berry, Little Richard, and Elvis Presley as laying out the foundation for rock and roll, it was the sound of Link Wray’s guitar playing that inspired the sound and playing of classic rock superstars such as Jimmy Page, Jeff Beck, Pete Townshend and so many others. Link Wray’s arrival in the rock scene in 1959 with the single “Rumble,” had a ripple effect on the rock and roll industry. Along with Duane Eddy and of course Dick Dale, the rock guitar instrumental became one of the most popular genres of music in the 1960s.

Link Wray released close to fifty albums throughout his lifetime when combining studio albums, live records and compilations. He had a long career as he was one of the most respected musicians of all time. His first album was released in 1960, his final record was issued in 2005 the same year he passed away. In the late 1970s, Link Wray was asked to team up with neo-rockabilly singer Robert Gordon in hopes of helping Robert Gordon become a big star. The two made some really great records together. .

Out Top 10 Link Wray songs focuses mostly on Link Wray’s instrumentals that featured his legendary guitar playing. Although, we have included some vocal records to show the other side of Link Wray and the pride he took in his heritage as a Native American. Link Wray also was a veteran having served in the Korean War.

We open up our top 10 Link Wray songs list with one of his first two singles he released in 1959. Along with the song “Rumble,” which we will get to later,  “Raw-Hide,” and “Dixie-Doodle,” were the songs that introduced the world to the sound of Link Wray. The A side of the single was “Raw-Hide,” the B side was “Dixie-Doodle.” The songs were eventually released on Link Wray’s first album entitled Link Wray & The Wraymen. Released in 1960, the album Link Wray & The Wraymen would have a major effect on the sound of rock and roll for the rest of the century. The recording “Dixie Doodle,” was a rock and roll interpretation of American classic traditional songs like “Yankee Doodle,’ and Daniel Decatur Emmett’s 1859 song “Dixie Land.” The recording of Rah-Hide was just stunning. It blew people’s minds. The arrangements of these song instrumentals were just as innovative as the guitar playing on the track. Because Link Wray’s other single “Rumble,” had been banned initially, many people heard this one first.

Want to know where Jimmy Page came up with the lick for the “Rain Song.” Well listen to this track and you will hear it. Jimmy Page has often spoke about how much of an inspiration Link Wray was to his guitar playing. The more one listens to Link Wray the more one will hear the guitar style of Jimmy Page. While it’s a very well know fact how much the blues inspired Led Zeppelin as the band constantly took blues riffs and lyrics and reinterpreted them into their own sound, it was the guitar style of Link Wray that seems to have had the most effect on Jimmy Page. Check out Link Wray’s “The Black Widow,” and once you get past the The Allman Brothers Sonny Boy Williamson  “On Way Out,” comparisons you will hear the inspiration behind the song “Heartbreaker.”

Link Wray’s “Slinky,” was released on his debut album Link Wray & The Wraymen. The album was released in 1960. The song was placed as the second track on the record following the album’s opening song entitled “Caroline.”

“The Swag,” was released as the B- Side to Link Wray’s legendary single “Rumble.” The song was released in 1968. “The Swag,” utilizes the standard blues progression. However, it’s fueled by a captivating guitar lick that is driven by a great dance hall beat. The perfect B-Side to a classic record.

“The Sweeper,” is one of our favorite Link Wray instrumentals. The song was released in November of 1963. It was issued as a single from the album Run Chicken Run on Swan records. Link Wray’s sound is developing and one could hear how his production is a little more slick in 1963 than it was in 1958.

This is a very different sounding Link Wray on this one. This is actually really amazing. Listen to his guitars, listen to the vocals. Its all classic rock 101. The album Be What You Want To was released in 1973. The record also featured Jerry Garcia on guitar and Commander Cody on piano.

“Comanche,” is one of Link Wray’s early singles and his most famous recordings. In fact, it was the third single release of like Link Wray’s career. Link Wary was so innovative you could the sounds of early punk in this tune. This was one that obviosity inspired bands like The Stooges.

You might not remember the title to this one, but you know you have heard it before. Link Wray’s “Jack The Ripper,” has appeared in countless movies and commercials. You need to listen to this one all the way though because it’s just simply stunning.  This magnificent instrumental was released during the summer of 1961 on Swan Records.

We close out our top 10 Link Wray songs list with his legendary instrumental entitled
“Rumble.” There are many people who regard this one as the greatest rock and roll instrumental of all time. It certainly was one of the most inspiring. The song was first released in 1958. Originally titled “Oddball,” the song’s title was changed to “Rumble,” when Phil Everly of The Everly Brothers mentioned that the song sounded like soundtrack to a fight scene.  And because of that, the song actually got banned in many US markets because radio stations were worried about inciting violence. “Rumble,” would become a top 20 hit on the Billboard top 100 peaking at number 16. This was Link Wray’s highest charting single of his career. It would become his signature songs and he revisited it many time in new recordings. This one below is the original.