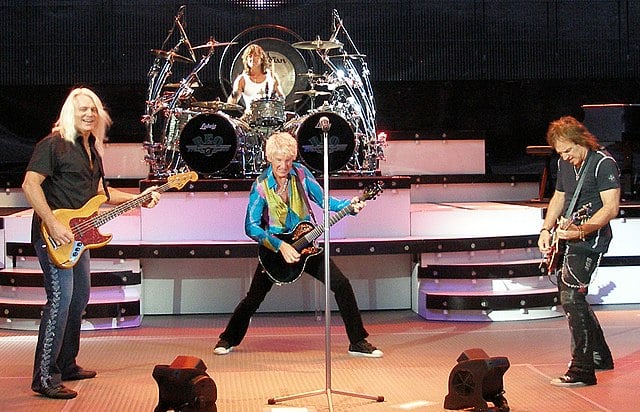 One of our favorite piano players in classic rock history is Neal Doughty. For many, that is a name nowhere as familiar as other rock piano players such as Elton John, Billy Joel, Rick Wakeman, Keith Emerson and so on. However, hardcore rock fans of the band REO Speedwagon will sing the highest praise to Mr. Neal Doughty. If it weren’t for Neil Doughty there would be no Reo Speedwagon as he has served as the founding member of the band and to this day continues to be REO Speedwagon’s longest running member.

Our top 10 REO Speedwagon songs list looks to present some of the best songs from a classic rock band who took extreme advantage of the MTV boon in the early 1980s. Or we could say MTV took extreme advantage of them as they had become very popular on the channel. The band had been together for ten years before MTV was launched in 1981. Nonetheless, the music video channel loved the band and helped catapult the group into superstar status.

album. The record was released in 1980. It was an album full of hits all driven by the album’s first single “Keep On Loving You.” The song hit number one on the U.S. Billboard Hot one hundred. The song went on to achieve platinum status making it the band’s biggest selling single they ever released. (Remember when music fans actually used to buy music?)

This is why we love Neal Doughty. We thought it would be best to segue back ten years to the band first single released in 1971. The song is based on the standard three chord blues progression. Nonetheless, Doughty’s piano playing drives the tune hard. On lead vocals is Terry Luttrell who sang lead with the band up until 1972. This is a very different sound from the one on their mega hit “Keep On Loving You,” which opened this top 10 REO Speedwagon songs list.

Goodbye Terry Luttrell and hello Kevin Cronin. On REO Speedwagon’s second album Kevin Cronin replaced Terry Luttrell on lead vocals. The great track “Music Man,” was written by Kevin Cronin. The song “Music Man,” opened up side two of the album.  Great drumming against a fabulous rhythmic guitar and piano groove set this one on fire. Great stuff early on from the band. Many people do not realize how great a rock and roll band REO Speedwagon were in those early days.

Okay, I guess we will have to get to this song eventually. It was a huge hit for the band. You can’t write a top 10 REO Speedwagon songs list without including it. The song is really not one of our favourites but we can’t deny the song’s popularity. It was the band’s only other number one single besides “Keep On Loving You.” The song “Can’t Fight This Feeling” was released on the album entitled Wheels Are Turnin’

. The album was released in 1984. It was the same year rock fans saw mega selling albums released by such artists as Prince, Bruce Springsteen, Van Halen, The Cars, Metallica, Stevie Ray Vaughan and many others. It was one of the best years for music on record.

Just listen to this song’s great opening riff. Those guitar and piano licks will melt your rock and roll heart. As we continue our top 10 REO Speedwagon songs list we once again turn to the early years. The song features Mike Murphy on vocals. The album did not sell well and is one of the lesser known REO Speedwagon records. Nonetheless, this one is a great track and very underrated.

This great track “Keep The Fire Burning,” served as the opening single from the album Good Trouble

. It was a highly anticipated album because it was the follow up to their huge record High Infidelity

. The album was released in 1982. We really like this one. It defines a great mixture of pop and rock. The song’s energy is highly addicting.

The next four REO Speedwagon songs on this list define the band’s ability to compose and record great rock and roll songs that enjoyed tremendous commercial success. The song “Take It On The Run,” was released on the album High Infidelity

. It was actually the fifth single the band released from High Infidelity

. Five big hit singles from one album is pretty impressive.

The classic REO Speedwagon song “Roll With The Changes,” was released on the album You Can Tune a Piano, but You Can’t Tuna Fish

. If there ever was an album with a great and very strange title it would be You Can Tune a Piano, but You Can’t Tuna Fish

. The album was released in 1978. The song “Roll With The Changes,” lit many turntables on fire when it was first released. I actually watched my turntable catch fire when the song was playing. Be careful with your iPhone when you play this very hot track.

As we close in on our number one spot on our top 10 REO Speedwagon songs list we turn to an early track recorded in 1973. The song “Ridin The Storm Out,” was released on the band’s third album entitled Ridin’ the Storm Out.

The song was also the opening track on the album. Lead vocals on the track were sung by Mike Murphy. You can hear that early 1970s classic rock Foghat, Blue Oyster Cult type sound all over this. A little “Don’t Fear The Reaper,” in this one. Do you hear it?

We close out our Top 10 REO Speedwagon songs list with the amazing song “Time For Me To Fly,” It doesn’t get much better than this one song. The song “Time For Me To Fly,” was released on the You Can Tune a Piano, but You Can’t Tuna Fish album in 1978. The song did not fare that well on the charts as it peaked at number 58 on the Billboard Hot 100. Regardless of its chart position, we think this is the best REO Speedwagon song ever released. What do you think?